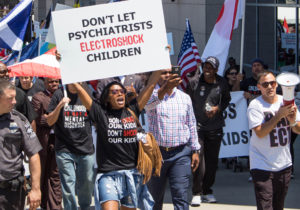 As many of our supporters have been made aware, the American Psychiatric Association is actively lobbying the U.S. FDA (which regulates the electroshock device) to allow them broader use of Electroshock on children, stating that, “Having access to a rapid and effective treatment such as ECT is especially meaningful in children and adolescents.”

Many find this hard to believe, but the fact is no agency is monitoring how many children are currently being electroshocked—except CCHR International.

CCHR has filed Freedom of Information Act (FOIA) requests with all U.S. states, asking for the age breakdown on those receiving electroshock, including children.  To date we have verified that 11 states are currently allowing children to be electroshocked.   In five of those states, we found children aged 0-5 years old being electroshocked.

We are still in the process of getting the responses to all of our FOIA requests. However, in each state where we have obtained the information, we have forwarded that documentation to legislators in those states (who have no idea children are being electroshocked).    Upon receiving the documentation obtained solely by CCHR Interantional, 5 states have responded, wanting to introduce legislation to ban the use of electroshock on children.

You may also be aware that CCHR International worked alongside the NAACP, which recently passed a resolution recommending Electroshock treatment be banned on children.  The fact is, the electroshocking of children is already happening, and the public is unaware.  Not only must we prevent the FDA from allowing psychiatrists greater access to electroshock children, we must ban it’s current use on children.

Without your donations and support, the information obtained by CCHR would not have been possible.  There is much more to do.  Please continue to support the Fight For Kids campaign by making a tax-deductible donation.