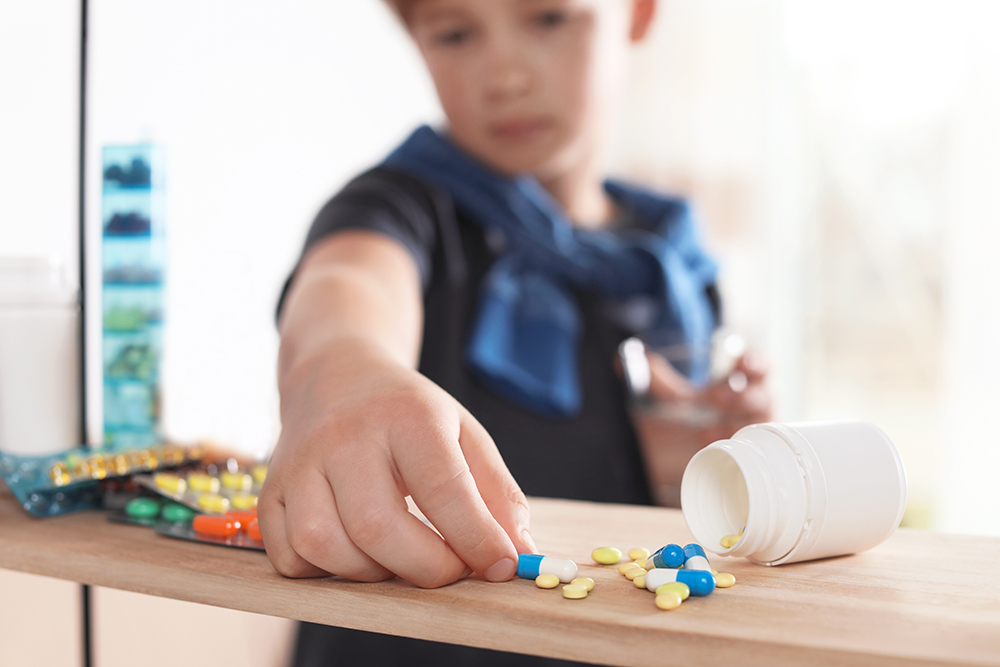 “Labeling a child as mentally ill is stigmatization, not diagnosis. Giving a child a psychiatric drug is poisoning, not treatment.” – The late Dr. Thomas Szasz, Professor of Psychiatry

With October designated “ADHD Awareness Month,” CCHR exposes the myths, risks, and harm to 3.1 million children prescribed stimulants, while praising efforts that brought a 1.2 million reduction in children being given behavioral drugs.

October is designated “ADHD Awareness Month,” during which pharmaceutical company-funded groups promote the risks of “untreated” Attention Deficit Hyperactivity Disorder, and the need for mind-altering “medication.”  Not discussed is how the psychiatric drugs prescribed to treat ADHD are linked to psychosis, addiction, cardiac arrest and suicide while raking in $20 billion a year in U.S. sales alone.[1] Such funding would be better spent to obtain 365,000 additional teachers and 827,000 teachers’ aides.[2] Efforts to expose the dangers of the drugs are praiseworthy, putting children’s protection first. Against the billions of dollars spent promoting the prescribing of “ADHD” drugs, there were 1,248,919 fewer American children taking them between 2013 and 2020, according to IQ Via tracking statistics.

However, in an effort to increase stimulant drug sales, ADHD proponent groups—often well-financed by pharmaceutical companies that manufacture ADHD drugs—promote that there is a worsening situation that requires more funds. Getting at the facts can be hard amid ambitious “awareness” campaigns that promote “everything is bad”—that despite the proliferation of psychotropic drugs and the billions of dollars invested in the treatment of ADHD, the prevalence of it among children and adolescents simply keeps increasing—from 6.1% in 1997-1998 to 10.2% in 2015-2016. [3] That statistic allegedly rose to 11% in 2017.[4] Takeda, the manufacturer of the ADHD drug, Vyvanse (lisdexamfetamine dimesylate), claims the ADHD rate is up to 12%.[5] One study put the rate as high as 14% of American children.[6]

“ADHD Awareness Month” is largely sponsored by CHADD (Children and Adults with Attention-Deficit/Hyperactivity Disorder), ADDA (Attention Deficit Disorder Association) and ACO (ADHD Coaches Organization) International. As early as 1995, the International Narcotics Control Board (INCB) raised the alarm over CHADD actively lobbying for the use of methylphenidate (Ritalin) for children labeled with ADHD while being funded by Ciba Geigy (now Novartis), the manufacturer of Ritalin.  In the financial year ending June 30, 2008, CHADD received $1.2 million in drug company donations and grants; 64% of CHADD’s sales and advertising was derived from such companies.[7] Shire Pharmaceuticals (now Takeda) had also given grants to ADDA, including for “ADHD awareness.”[8]

CHADD asserts that approximately 10 million adults also have ADHD.[9] Adult ADHD was a marketing message launched in 2003 by pharmaceutical giant Eli Lilly and Co., which at the time had the only drug with Food and Drug Administration (FDA) approval to treat adults. CHADD told media that between 2 and 4% of adults had ADHD. Eli Lilly’s TV and radio ads about adult ADD [sic] and its “non-stimulant” drug Strattera centered around subjective screening questions, such as “How often are you distracted by activity or noise around you?” and “How often do you feel restless or fidgety?”[10] In 2008, Lilly gave CHADD a grant of $200,000.[11]

In 2018, UK psychiatrists Joanna Moncrief and Sami Timini reported, “Encouraging self-diagnosis has been a prominent part of adult ADHD marketing campaigns, with company-run and other commercially sponsored websites featuring questionnaires that people can self-administer to see whether they have the condition, and encouraging people to ask their health professionals about drug treatment. Company material also reinforces the notion that adult ADHD is a brain-based disease state, ‘a real, and treatable, medical condition.’”[12] Which, while the phenomena that adults—and children—may experience are very real to them, they are being misled when told ADHD is a neurobiological disorder. It is not.

Moncrief and Timini further discussed how, in 2008, it was revealed by a Senate investigation in the U.S. that Professor Joseph Biederman and other researchers based at Harvard University, who had promoted the concept of adult ADHD and conducted much of the research including drug trials, had failed to disclose all the income they had received from pharmaceutical companies. They subsequently admitted to receiving millions of dollars over several years collectively, and data obtained from the companies involved suggested the figures could be higher still.[13] CHADD had awarded Biederman, who was also on its medical advisory board, its “Hall of Fame” award.[14]

Moncrief and Timini wrote: “We suggest that adult ADHD represents one of the latest attempts to medicalize ordinary human difficulties, and that its popularity is partly dependent on marketing and the reinforcing effects of stimulants…. The phenomenon of adult ADHD started to emerge in the USA during the 1990s, propelled by the activities of patient advocacy groups, the media and professionals.”[15]

In 2013, Dr. Keith Conners, a psychologist, professor emeritus at Duke University and prolific ADHD advocate, called the rising rates of ADHD diagnoses in children “a national disaster of dangerous proportions…. The numbers make it look like an epidemic. Well, it’s not. It’s preposterous.”[16]

Prof. Allen Frances, Former Chairman of the Diagnostic and Statistical Manual of Mental Disorders (DSM-IV) Task Force, commented that rates of ADHD “have tripled, partly because new drug treatments were released that were aggressively marketed.” He added that “there is concern that the noxious effects of DSM-5 may spread beyond our boundaries. The excessive diagnosis of ADD and Autism began in the U.S., but these false epidemics are catchy and have now become a world-wide phenomenon.”[17]

A statement made in CHADD’s “ADHD is Real” video asserted that “the financial burden (associated with ADHD) was estimated between $143 billion to $266 billion annually.” However, that study was funded by Shire Pharmaceuticals and many of the study’s authors had financial relationships with Shire.[18] Hardly keeping an arms-length relationship.

Since 2000, the FDA has cited every major ADHD drug manufacturer for false and misleading advertising—some multiple times.[19] In February 2014, Shire agreed to pay $57.5 million in fines to resolve allegations of improper sales and advertising of several drugs, including Adderall XR, Vyvanse and Daytrana, the latter a patch that delivers the stimulant through the skin.[20]

In 2019 Takeda pharmaceuticals, which is based in Japan, acquired Shire.[21] Takeda formed the “ADHD Institute,” which may sound scientific but it is a marketing website arm that promotes the “disease” in order to sell its products. It forwards such falsehoods as ADHD having “an underlying genetic component, with a high estimated heritability rate.”[22] Such assertions are not scientifically proven and not true.

Even CHADD’s website contains this disclaimer: “…there is no single medical, physical, or genetic test for ADHD…” and “basic neuroimaging research is being conducted to further delineate the pathophysiology of ADHD…. However, the research is not definitive enough for practical application of neuroimaging.”[23] In other words, neuroimaging (brain scans) cannot diagnose ADHD.

“Promoting diseases to sell drugs is a common and venerable practice among drug companies,” explained Marcia Angell, a senior lecturer on social medicine at Harvard Medical School and former editor-in-chief of the New England Journal of Medicine. “They try to expand the size of the market by implying that nearly everyone has the condition.”[24]

A New York Times review of Alan Schwarz’s book ADHD Nation: Children, Doctors, Big Pharma, and the Making of an American Epidemic exposed the unholy alliance between drug makers, academic psychiatrists, policymakers and celebrity shills. “The insidious genius of this alliance,” Schwarz pointed out, was “selling the disorder rather than the drugs, in the guise of promoting ADHD ‘awareness.’” No blood test or CT scan can tell you if you have ADHD — the diagnosis is made by subjective clinical evaluation and screening questionnaires. “This lack of any bright line between pathology and eccentricity, Schwarz argues, has allowed Big Pharma to get away with relentless expansion of the franchise.”[25]

The article continued: “By bankrolling studies, cultivating mutually beneficial relationships with psychopharmacologists at prestigious universities like Harvard and laundering its marketing messages through trusted agencies like the World Health Organization, the pharmaceutical industry created what Schwarz aptly terms ‘a self-affirming circle of science, one that quashed all dissent.’”[26]

Between 1998 and 2006, annual spending on direct-to-consumer ads for medications generally rose from $1.3 billion to $5.4 billion. This is a lucrative area for drug makers as every dollar spent on direct-to-consumer advertising is believed to generate $6 in sales.[27] The global ADHD drug sales market is a reported lucrative $29.5 billion and is predicted to reach a whopping $45.6 billion a year by 2027.[28]

Against such huge vested interests and funding, the fact that there has been any decrease in children being drugged is remarkable. As people, especially parents, become more aware of psychiatric drug risks and the lies told to convince them it is necessary to put their children on mind-altering drugs, CCHR has documented a decline in ADHD drug usage among America’s children. In 2013, IMS Health Vector One National database (now IQVia) showed 4,404,360 children and teens taking ADHD drugs, broken down as follows:

Psychiatrist Thomas Szasz, the co-founder of CCHR, railed against his profession drugging so many children: “No one explains where this disease [ADHD] came from, why it didn’t exist 50 years ago. No one is able to diagnose it with objective tests.” Further, “In social terms, it gives the impression to people that behavioral problems are medical and should be handled with drugs; it imposes a certain stigma on the child, possibly on the family. It medicalizes educational and child-rearing problems, and it may cause biological problems in the person taking the drug. I don’t know if the average person on Main Street realizes that if a 30-year-old man has a pocketful of Ritalin, he can go to jail for years. This is called ‘speed.’ And this is what they give as a treatment to schoolchildren when there’s absolutely no laboratory or medical evidence that they are sick.”[31]

Behaviors on ADHD questionnaires are so subjective that anyone could fall prey to a diagnosis. Symptoms include:

Dr. Fred Baughman, a retired neurobiologist, who followed ADD/ADHD research for 20 years called it “a colossal fraud.” He says there is no evidence of a physical or chemical abnormality in people diagnosed with ADD or ADHD.[33]

Dr. Patrick Hahn, an Affiliate Professor of Biology at Loyola University Maryland, reminds parents: “The overall message of these ads is clear: these drugs will improve every aspect of your child’s life, including grades, extracurricular activities, peer relations, and family life. In fact, there is no credible evidence that any of these drugs leads to any meaningful long-term benefits to kids….”[34]

CHADD’s marketing may sound “assuring”: “Medication does not cure ADHD; when effective, it eases ADHD symptoms during the time it is active. Thus, it is not like an antibiotic that may cure a bacterial infection, but more like eyeglasses that help to improve vision only during the time the eyeglasses are actually worn.”[35] It is an appalling analogy—wearing eyeglasses does not carry a risk of driving you to suicide or becoming psychotic or killed.

Strattera, marketed as a non-stimulant, is an antidepressant and carries an FDA Black Box warning about the risk of suicidal thoughts in children and adolescents.[39] CHADD claims Strattera lacks the abuse potential of stimulants, since it is not a controlled Schedule II drug like other ADHD drugs.[40] But it is not without serious risks in addition to the threat of suicidal behavior. A study titled, “Aggression, Mania, and Hypomania Induction Associated with Atomoxetine” (Strattera), published in Pediatrics, revealed that 33% of the patients taking the drug exhibited extreme irritability, aggression, mania or hypomania.[41]

Martin Whitely is a former state legislator in Western Australia and a research fellow at the John Curtin Institute of Public Policy. In his 2021 book Overprescribing Madness, Whitely recounted some of the adverse event reports for Strattera in Australia:

All of this information should be made broadly available but is not.

[17] https://www.cchrint.org/2022/03/21/adhd-marketing-brands-children-to-hook-them-on-psychostimulants/; “Does your child really have a behavior disorder? A shocking book by a leading therapist reveals how millions of us – including children – are wrongly labeled with psychiatric problems,” Daily Mail, 6 May 2013, http://www.dailymail.co.uk/health/article-2320493/Does-child-really-behaviour-disorder-A-shocking-book-leading-therapist-reveals-millions–including-children–wrongly-labelled-psychiatric-problems.html#ixzz2SciDb8UA; Allen Frances, “The International Reaction to DSM-5,” Huffington Post, 25 Apr. 2013, http://www.huffingtonpost.com/allen-frances/reaction-to-dsm-5_b_3146659.html