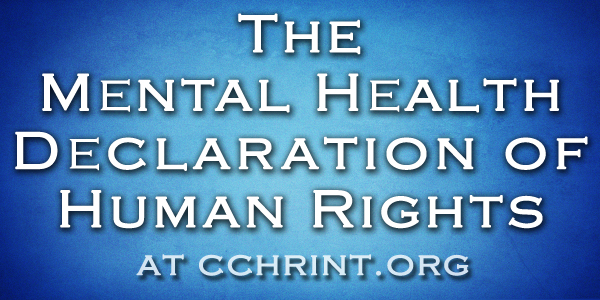 “What is needed is an international set of protections from an invasive, intrusive and abusive mental health industry—CCHR is calling for the adoption of its Mental Health Declaration of Human Rights.”

This week the psychiatric/pharmaceutical industry is busy promoting “Mental Illness Awareness Week,” a campaign launched by the heavily pharmaceutically-funded “patient’s rights organization,” the National Alliance on Mental Illness (NAMI), promoting the “benefits of early intervention and treatment,” and ignoring, once again, the real crisis in today’s mental health—the millions of men, women and children being prescribed psychiatric drugs that hundreds of international drug regulatory agencies cite as dangerous and life-threatening.

The Citizens Commission on Human Rights (CCHR), an international mental health watchdog responsible for helping to enact more than 150 worldwide reforms,  argues that instead of more drugs and more thinly veiled pharmaceutical marketing campaigns, such as NAMI’s campaign to “End the Stigma of Mental Illness,” real mental health awareness should focus on the damage being inflicted upon millions under the guise of mental health, and that real change will only come with patient protections; namely, a mental health declaration of human rights to protect millions from abuse at the hands of the mental health industry.

The data is startling and, today, mental illness diagnosis and “treatment” has resulted in:

Given that a U.S. Senate investigation revealed that in just two years pharmaceuticals funded NAMI to the tune of $23 million, representing about three-quarters of its donations, it is no surprise that they chose to ignore the current crisis in mental health and focus on increasing treatment, rather than protecting patients from harm.    Even NAMI’s campaign to stop the “stigma” and “end discrimination” against mental illness had as its  “Founding Sponsors,” Abbott Labs, Bristol-Myers Squibb, Eli Lilly, Janssen, Pfizer, Novartis, SmithKline Beecham and Wyeth-Ayerst Labs—the pharmaceutical giants that greatly benefit from the ‘early intervention and treatment’ NAMI is promoting.

CCHR says that the psychiatric abuses and human rights violations occurring around the world are not due to a lack of mental health awareness, but rather to organizations more aligned with vested interests than patients rights and that real mental health awareness would come from enacting an international set of protections from an invasive, intrusive and abusive mental health industry, and CCHR is calling for the adoption of its Mental Health Declaration of Human Rights.

Among these rights are:

The need for global acceptance of the Mental Health Declaration of Human Rights is made clear when CCHR explains that, “virtually no human or civil rights are granted to those psychiatry deems mentally ill, that no medical or scientific tests exist to conclusively prove anyone is mentally ill, and that no guidelines exist to protect citizens from abuses committed under the guise of mental health.”

Mental Illness “Awareness“ is realizing that without such a declaration, abuses in psychiatric diagnosing and drugging will continue without restraint.  Read the entire Mental Health Declaration of Human Rights here.