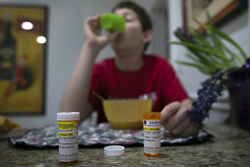 Dr. Peter Gotzsche has created a controversy and sparked criticism over what he sees as a damaging over-prescription of drugs by psychiatrists.

Gotzsche recently compiled a list of ten common myths held not only by the general public, but also trained psychiatrists concerning the safety of psychotropic drugs, and the rationale for their use.

As an internist, Gotzsche remarked that since he was outside of the political orthodoxy of the world of psychiatric medicine, he was free to express what he believed to be the sentiments of many psychiatrists who must remain quiet in their objections for fear of hurting their careers.

1.  Mental diseases are caused by a chemical imbalance in the brain

“We have no idea about which interplay of psychosocial conditions, biochemical processes, receptors and neural pathways that lead to mental disorders and the theories that patients with depression lack serotonin and that patients with schizophrenia have too much dopamine have long been refuted.”

2.  It’s easy to go off antidepressants any time you want to

Here, Gotzsche points to drug trails involving agoraphobics and people suffering from panic disorder, whom were not depressed.  Fifty percent of the patients found it difficult to come off antidepressants even though they were gradually reducing their doses.  It could not be that the patients saw their depression returning, as they were not depressed to begin with.

3.  Psychotropic drugs are to mental illness as insulin is to diabetes

“When you give insulin to a patient with diabetes, you give something the patient lacks, namely insulin. Since we’ve never been able to demonstrate that a patient with a mental disorder lacks something that people who are not sick don’t lack, it is wrong to use this analogy.”

“In 1987, just before the newer antidepressants (SSRIs or happy pills) came on the market, very few children in the United States were mentally disabled. Twenty years later it was over 500,000, which represents a 35-fold increase. The number of disabled mentally ill has exploded in all Western countries.”

5.  SSRIs don’t cause suicide in children and adolescents

“The companies and the psychiatrists have consistently blamed the disease when patients commit suicide. It is true that depression increases the risk of suicide, but happy pills increase it even more, at least up to about age 40, according to a meta-analysis of 100,000 patients in randomized trials performed by the US Food and Drug Administration.”

6.  SSRIs don’t have side effects

“Patients care less about the consequences of their actions, lose empathy towards others, and can become very aggressive. In school shootings in the United States and elsewhere a striking number of people have been on antidepressants.”

7.  SSRIs are not addictive

“The worst argument I have heard about the pills not causing dependency is that patients do not require higher doses. Shall we then also believe that cigarettes are not addictive? The vast majority of smokers consume the same number of cigarettes for years.”

8.  The prevalence in depression has increased a lot in recent history

Gotzsche points out that this is difficult if not impossible to determine, as the criteria for being diagnosed as clinically depressed has been drastically lowered over the last 50 years.

9.  The main problem is not overtreatment, but undertreatment

“Some professors say that schizophrenia causes brain damage and that it is therefore important to use antipsychotics. However, antipsychotics lead to shrinkage of the brain, and this effect is directly related to the dose and duration of the treatment.”

Read the rest of the article here:  http://www.designntrend.com/articles/10379/20140123/danish-doctor-offers-ten-myths-psychotropic-drugs.htm