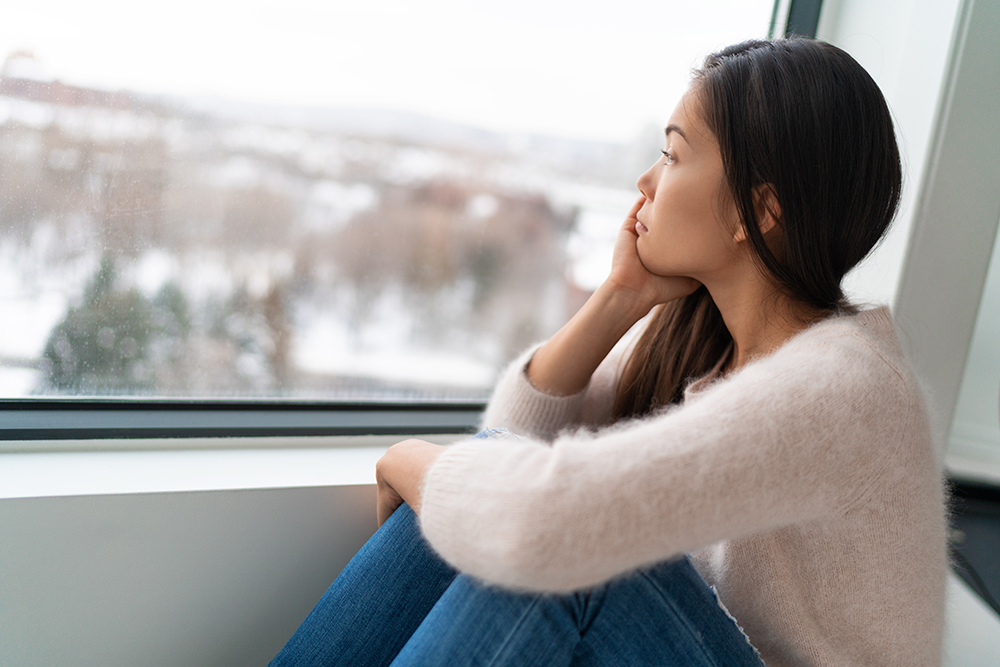 “During the ‘Holiday Season,’ people need to reinforce their right to be given full information about and demand confirmative physical tests as evidence of a mental health diagnosis given then. They should also demand and expect workable help, not drugs that merely mask a problem.” – Jan Eastgate, President CCHR International

Telling 10 million Americans they have Seasonal Affective Disorder (SAD), also known as “Winter Blues,” for which there are neither tests to confirm nor a cure, is an abuse and a fraud—feeding an exorbitant antidepressant and SAD therapy market.

With the holiday season emerging, people may feel “the blues” because of missing loved ones and loneliness while limited sunlight during Winter is said to dull one’s outlook. However, people shouldn’t buy into the psychiatric idea that these constitute “mental illness,” or being biomedically impaired. Thanksgiving and Christmas in the U.S. come during a period of the year when psychiatrists label individuals with “Seasonal Affective Disorder” (SAD), described in the American Psychiatric Association’s diagnostic manual as the onset and remission of depressive episodes at characteristic times during the year—such as beginning in the fall and remitting in spring.[1] As the sun begins to shine again, apparently the disorder disappears.

It is a lucrative business playing on peoples’ sadness and cold weather; the SAD market was a global $544.7 million industry in 2020. At least a dozen pharmaceutical companies are key players in the market, manufacturing psychotropic drugs to treat SAD.

The APA recently released a poll that claimed that about half of Americans (49%) said they had heard about SAD; 66% noted behavioral changes during winter. These generalized statistics, sending an alarming message about how prevalent SAD is, were found to be based on a poll of a mere 2,211 U.S. adults.[2] An estimated 10 million Americans already have SAD, according to a Psychology Today article—a figure that begs for scrutiny.

SAD is theorized to be caused by “disturbed levels of brain chemicals… that demands treatment.” This appears to be an extension of the now thoroughly debunked and fraudulent theory that a chemical imbalance in the brain causes depression. Psychiatric organizations around the world have been put on notice not to forward this chemical imbalance urban legend as legal experts warn it can constitute consumer fraud.

There’s not a shred of scientific evidence to support SAD as a mental disease—no physical test or blood work can substantiate it. Researchers point to this general problem of validity with all of the disorders in the APA’s Diagnostic and Statistical Manual of Mental Disorders. The manual is used to bill insurance companies, Medicaid, and Medicare for treatment reimbursement. In the last edition, DSM-5, released in 2013, 70% of its panel members determining what mental disorders would be published, had financial ties with pharmaceutical companies compared to about 57% who reported ties in the previous edition published in 1994. The DSM-I, published in 1952, had 106 disorders. The DSM-5 has approximately 400 disorders (with several new “depressive” disorders)—an increase of more than 277%. The people involved in its creation and revisions were consultants and committee members who are psychiatrists.[3]

Psychiatrists cannot point to any cause of SAD, its etiology remaining unknown, but there are plenty of biological, mind-altering drugs used to treat it.

Treatment often includes SSRI antidepressants. The Food and Drug Administration (FDA) approved the antidepressant bupropion (Wellbutrin) in an extended-release form specifically to treat SAD, to be taken daily “from the fall until the following early spring” only!

Psychiatrists do not consider SAD as a separate disorder but a type of depression that includes symptoms such as losing interest in activities usually enjoyed, low energy, feeling hopeless or worthless, changes in weight, appetite, and suicidal thoughts or thoughts of dying.[4] Another SAD symptom is trouble sleeping, yet Wellbutrin’s side effects include insomnia![5] Wellbutrin lists other common adverse effects such as changes in appetite, loss of interest in sex, agitation, seizures, severe high blood pressure and periods of mania, racing thoughts, reckless behavior, increased anger, thoughts about suicide or dying, and attempted suicide—the latter being one of the very things it is prescribed to supposedly prevent.[6]

The global antidepressants market was expected to decline from $26.25 billion in 2020 to $15.87 billion in 2021.[7] That’s an incentive to market conditions like SAD during the fall and spring to potentially increase sales. A Google search for “Seasonal Affective Disorder” over a four-week period during October and November this year yielded over 250 entries, asserting that “SAD is real” and advising on treatments for SAD across the age spectrum from children to the elderly.

The promotion of SAD may also increase sagging income to psychiatric associations, such as the APA. Along with its foundation, which is its “community outreach” organization, the APA has experienced a decline in both the number of medical students interested in psychiatry in the U.S. and in its own finances. As ProPublica disclosed:

The APA is facing a crisis of diminishing numbers of psychiatrists practicing in the U.S. Beginning in the late 1990s and extending into the early years of the 21st century, APA has lost members at an annual rate of approximately 4%. The Bureau of Labor Statistics reports that there are only 25,500 working psychiatrists in the U.S.

The year it saw exceptionally increased income was 2013 when it launched DSM-5. Gross income was over $81.5 million, with a net income of nearly $25 million, and reporting that 52% of its income was inventory sales of $42.36 million.[9]

DSM has been criticized as “not scientific but a product of unscrupulous politics and bureaucracy.” Further, “In place of scientific findings, the DSM uses expert consensus to determine what mental disorders exist and how you can recognize them. Disorders come into the book the same way a law becomes part of the book of statutes. People suggest it, discuss it, and vote on it.”[10]

Psychologist Phillip Hickey, Ph.D. points out: “The reason that several psychoactive drugs have become blockbusters in recent years is that psychiatry has the advantage, unique in the medical field, that it can invent illnesses, and relax the criteria for these illnesses, more or less at will. Psychiatry, unlike other medical specialties, has no natural limits to its growth potential. They can continue to expand the diagnostic net until everybody in the world has a diagnosis.”[13]

That expansion has included SAD which is an indictment of how consumers can be taken advantage of—their very real emotional responses to the environment and sadness generally and problems in life can be so easily re-defined as a discrete mental “illness” requiring a drug to manage their lives.

In 2017, Dr. Dainius Pūras, M.D., a special rapporteur to the United Nations wrote a report to the UN Human Rights Commission, stating:

“There is now unequivocal evidence of the failures of a system that relies too heavily on the biomedical model of mental health services, including the front-line and excessive use of psychotropic medicines, and yet these models persist…. We have been sold a myth that the best solutions for addressing mental health challenges are medications and other biomedical interventions.”[14]

And so it is with SAD.

Consumers are misled, further showing the need for CCHR to monitor the mental health field, to expose its arbitrary and unscientific diagnoses and the damaging treatments that ensue from such stigmatizing labels—both of which put many patients’ lives at risk. During the “Holiday Season,” people need to reinforce their right to be given full information about and demand confirmative physical tests as evidence of a mental health diagnosis given then. They should also demand and expect workable help, not drugs that merely mask a problem—in essence, they have the right not to be misled and harmed under the guise of mental health care.

[3] Stephanie Brunner, “What impact does the pharmaceutical industry have on the medical definition of depression?” Journal of Integrated Studies, Vol. 8, No. 1, 21 Apr. 2016, https://jis.athabascau.ca/index.php/jis/article/view/176/324

[10] Hope Reese, “The Real Problems with Psychiatry: A psychotherapist contends that the DSM, psychiatry’s “‘bible’ that defines all mental illness, is not scientific but a product of unscrupulous politics and bureaucracy,” The Atlantic, 2 May 2013, https://www.theatlantic.com/health/archive/2013/05/the-real-problems-with-psychiatry/275371/T

[13] Phil Hickey, Ph.D., “Psychiatry Is Not Based On Valid Science,” Behaviorism and Mental Health, 9 Jan. 2014, https://www.behaviorismandmentalhealth.com/2014/01/09/psychiatry-is-not-based-on-valid-science/

[14] “World needs ‘revolution’ in mental health care – UN rights expert,” 2017, http://www.ohchr.org/EN/NewsEvents/Pages/DisplayNews.aspx?NewsID=21689&LangID=E#sthash.MMIxDbIx.dpuf; A/HRC/35/21, “Promotion and protection of all human rights, civil, political, economic, social and cultural rights, including the right to development,” Report of the Special Rapporteur on the right of everyone to the enjoyment of the highest attainable standard of physical and mental health, Human Rights Council Thirty-fifth session, Agenda item 3, 6-23 June 2017, https://documents-dds-ny.un.org/doc/UNDOC/GEN/G17/076/04/PDF/G1707604.pdf?OpenElement