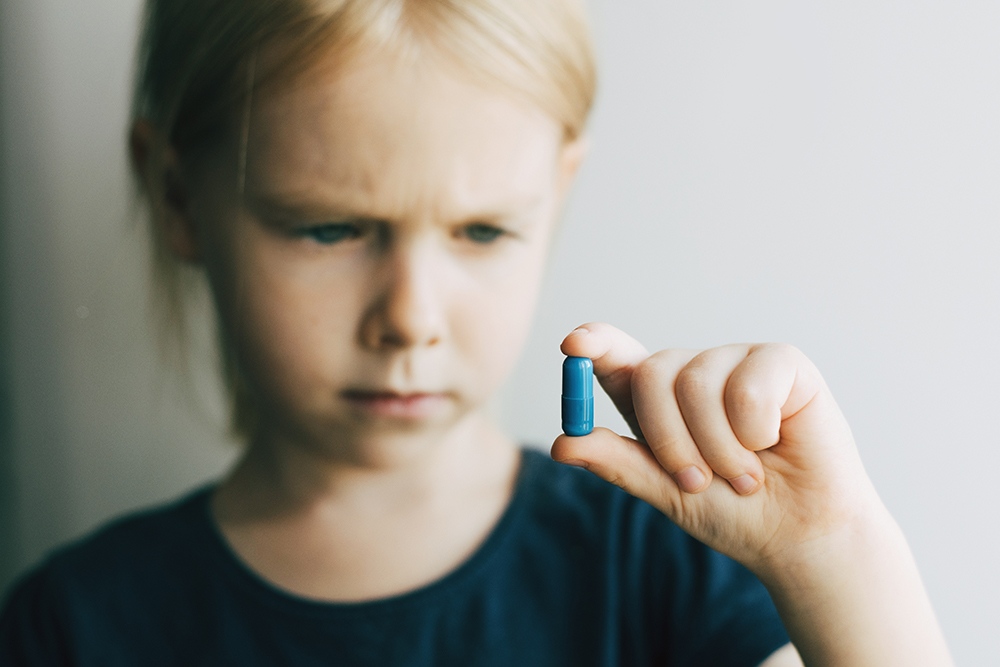 New studies have prompted watchdog concerns about the millions of U.S. children—many younger than five—and teens taking antipsychotics, antidepressants and stimulants, despite risks, including diabetes and death

A new study which focuses on polypharmacy in preschoolers reveals that children under the age of six prescribed antipsychotics will likely end up being given four or more psychotropic drugs at a time within five years. Foster care children were the most at risk, being prescribed the mind-altering drugs longer than other children. The study published in Psychiatric Services reviewed antipsychotic medications for low-income preschoolers, represented in Kentucky.[1] Mental health industry watchdog, Citizens Commission on Human Rights International (CCHR) has tracked what it calls “mass child drugging” in the U.S., especially with antipsychotics, which can lead to diabetes and death and calls for increased oversight.

The Psychiatric Services study found that attention-deficit hyperactivity disorder (ADHD) represented 91% of the diagnoses prescribed the psychotropics, despite antipsychotics not being approved to treat ADHD in young children. Anxiety and trauma-related diagnoses accounted for 64% of the diagnoses and autism spectrum disorders, 43%. Exposure to the drugs ranged between an average of 1.7 and 2.6 years, but 27% were prescribed these for more than four years.[3]

CCHR says the symptoms of ADHD are so subjective that any child could be misdiagnosed. Symptoms include finger-tapping, fidgetiness, and off-task behaviors, “hyperactive” or “impulsive,” doesn’t pay attention to the teacher, etc. There is no biological test to confirm ADHD. The youngest children in the classroom are up to 50% more likely than the oldest to be diagnosed and medicated.

A study published in JAMA Network in September 2021 reviewed 334 published studies in children and adolescents noted that younger children are being diagnosed because of their “relative immaturity.”[4]

Using data from Kentucky Medicaid claims from 2012 to 2017, the study published in Psychiatric Services found 31% of the 316 children who were started on an antipsychotic in 2012 (younger than age six) ended up, over the next five years, being prescribed four or more drug classes. In addition, 65% of the original 2012 group ended up being prescribed at least three drugs over the next five years. Those with autism or in foster care ended up taking the drugs for a longer time than other children.

Researcher Professor W. David Lohr from the University of Louisville told Spectrum News, “I’m concerned that we don’t really understand the risks these medications pose.” They are associated with side effects such as weight gain, increased risk of metabolic problems and movement disorders. Antipsychotics are often being used off label to treat disruptive behaviors. “We also found in our cohort that many children don’t receive the necessary lab studies to monitor their glucose and lipids [fats, oils, etc.] levels in response to these medications.” Dr. Lohr wants to see more systematic, preventive-care programs.[5]

Children and youth prescribed antipsychotics have an increased risk of type 2 diabetes that can increase with cumulative dose.[6]

CCHR believes powerful, mind-altering chemicals should be excluded from pediatric use entirely.

Risperidone has been known to cause male breast growth, called gynecomastia in young boys; some of the affected patients have even been as young as four.[8]

According to study results reported in an Agency for Healthcare Research and Quality (AHRQ) report, increased utilization of atypical antipsychotics is outpacing scientific and clinical evidence supporting their safety and efficacy. As of 2015, only one antipsychotic is approved for use under the age of five for irritability associated with autism. This and another antipsychotic are approved to treat those aged six to nine.[9]

A 2019 study published in JAMA Psychiatry also underscored concerns in the medical community about antipsychotics. An observational study looked at the data of almost 248,000 children and young adults in Tennessee from the age of 5 to 24 who were enrolled in Medicaid between 1999 and 2014. The young people given a higher dose of an antipsychotic had a 3.5 times higher risk of unexpected death than the control group. Wayne A. Ray, PhD, lead author and a professor of health policy at Vanderbilt University School of Medicine in Tennessee, said “The findings suggest that the concern over deaths related to antipsychotics in younger populations have an important public health impact.” He also said alternative approaches are needed.[10]

CCHR has worked with parents’ group to protect children from being forced to take psychotropic drugs as a requisite for their education. Some parents were criminally charged when they withdrew their child—under medical advice—from a psychiatric drug. This led to CCHR obtaining the federal Child Medication Safety amendment in 2004 which prohibits schools from forcing schoolchildren onto psychotropic drugs to remain in school. CCHR documented numerous, tragic child deaths from forced psychiatric drug treatment.

CCHR wants to see much tighter controls over the mental health treatment of children, with prohibition of any psychiatric coercion used on children and accountability for their being harmed or dying as a result of psychotropic drugs or electroshock treatment. Parents should report any abuse to CCHR.