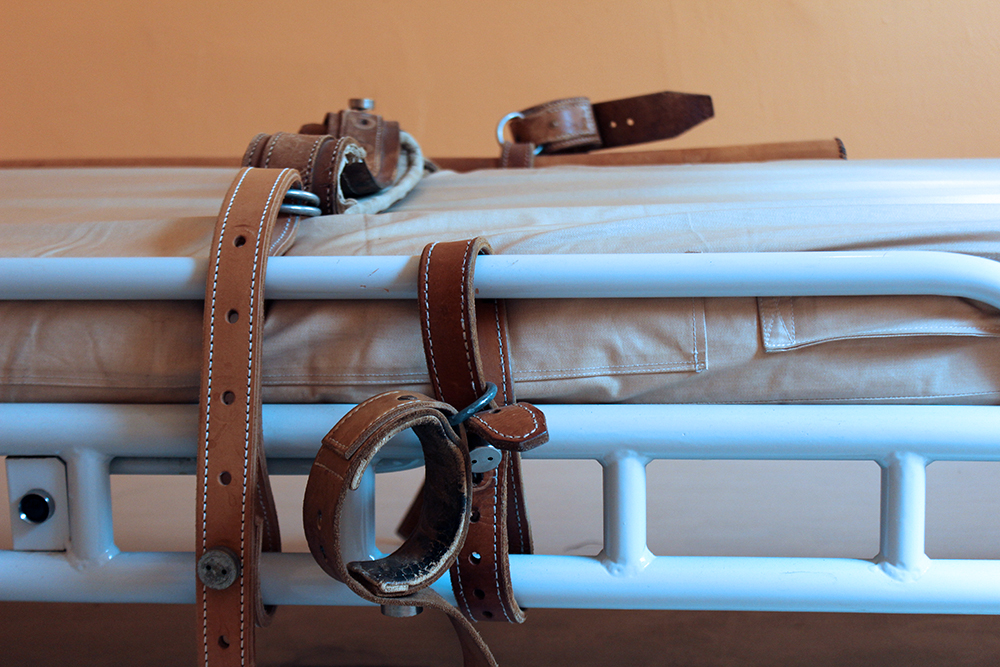 “Placing a person in a restraint puts the person at risk of trauma, injury, and even death. According to one study, between 50 to 150 people die each year in the United States as a result of seclusion and restraint practices.” – The Justice Center for the Protection of People with Special Needs

The mental health watchdog, CCHR, supports states taking action to prohibit or restrict lethal physical or chemical restraint use in police and psychiatric settings in the wake of teen and young adult deaths. WHO guideline also calls for such actions.

Lethal restraint uses in psychiatric facilities and in police take-downs of suspects has been prominent in the news for the past year and a half and the mental health watchdog, Citizens Commission on Human Rights International has praised State actions now being taken to curb this.

The most recent action involved Elijah McClain, a 23-year-old African American man who died following a police restraint in Aurora, Colorado in August 2019.

McClain was injected with an amount of ketamine appropriate for someone 77 pounds heavier than his 143-pound frame, without determining if it was necessary and without monitoring him for side effects afterward. In a chokehold, he gasped that he could not breathe, lapsed into unconsciousness and was later declared brain dead at a hospital.[1]

On September 1, 2021, the officers and paramedics involved were indicted by Colorado state Attorney General, Phil Weiser, on charges of manslaughter and criminally negligent homicide in relation to Elijah McClain’s death. [2]

CCHR’s concern was that Elijah was injected with a powerful sedative in the fatal encounter that provoked national outcry during racial injustice protests last year.

Medical News Today reports that victims of ketamine “may lose consciousness or be confused and compliant.”[3] Abused on the streets, the drug is known as a “date rape” drug because it can cause disassociation. Because the drug also causes amnesia, a victim may not remember an assault the next day.[4] In some cases, the drug has caused heart or breathing failure and required those injected to be revived or intubated. [5]

Rev. Fred Shaw, Executive Director of the NAACP Inglewood-South Bay branch, a spokesperson for CCHR and co-founder of its Task Force Against Racism and Modern-Day Eugenics, was among many that wrote to legislators and Colorado’s state governor, opposing the use of ketamine to restrain any individual in or outside psychiatric hospitals and nursing homes.[6] Rev. Shaw stressed the need for policy changes nationally to ban the use of  chemical restraints not just by police—who should not be placed in the position of using these—but also in behavioral facilities.

This aligns with a World Health Organization guideline on mental health in the community issued on July 10, 2021, that called upon countries to prohibit “coercive practices such as forced admission and treatment, seclusion and restraint.” People who are subjected to such coercive practices report feelings of dehumanization, disempowerment and being disrespected, according to the guidelines.[7]

Federal regulations restrict the use of physical and (mind-altering) chemical restraints to discipline patients in hospitals receiving federal funding. The regulations also ordered a “national reporting system” to be implemented and for government funding to be cut to any facility that did not comply.[8] This year, Michigan and Utah moved to restrict the use of restraints.[9]

Placing a person in a restraint puts the person at risk of trauma, injury, and even death. According to one study, between 50 to 150 people die each year in the United States as a result of seclusion and restraint practices, according to The Justice Center for the Protection of People with Special Needs. The Medical Director’s Council of the National Association of State Mental Health Program Directors deems the use of restraint as a “treatment failure.”[10]

Elijah’s death helped inspire a sweeping police accountability law in Colorado, a ban on chokeholds and restrictions on the use of ketamine.[11] FOX31 News Problem Solvers spent nearly two years investigating ketamine’s use and found a handful of questionable cases, including the death of Elijah. In July 2021, Governor Jared Polis signed into law the restricting of ketamine’s use and limiting it to medical professionals in true medical emergencies. [12]

Colorado state representative Leslie Herod stated, “We took a significant step forward in our state to improve policing and end the misuse of ketamine, which has had dangerous and deadly consequences for Coloradans.” [13]

Neuroscientist Carl Hart, chair of Columbia University’s psychology department, was quoted by ABC News, stating: “Why anyone would be giving ketamine in that circumstance is beyond me. The major problem here is we should never be ordering any medication, and no one should be taking or given it against their will.”[14]

Elijah had been walking home from a grocery store after buying iced tea and was stopped by police based only upon a 911 caller reported a man who seemed “sketchy.” Family and friends described McClain, a massage therapist, as a gentle and kind introvert who volunteered to play his violin to comfort cats at an animal shelter. His pleading words captured on police body camera video — “I’m just different” — painfully underscored his apparent confusion at what was happening, Associated Press reported. [15]

Charges were also filed against nurses and workers involved in a behavioral hospital restraint death 16-year-old Cornelius Frederick after he threw a sandwich at another child during lunch on April 29, 2020. Seven male staff members from Lakeside Behavioral Academy owned by Sequel Youth & Family Services held him on the floor for more than 10 minutes, putting weight on his legs and torso. He gasped that he could not breath. Cornelius died two days later at a hospital.[16]

On August 1, 2021, Heather McLogan, the former director of nursing at Lakeside pleaded no contest in connection with death. McLogan did not participate in the restraint, but documents from the agreement state that she should have ended the action. McLogan will receive probation on the charge of third-degree child abuse, a felony, and will testify against two other defendants in the case.[17]

CCHR, established in 1969, has helped obtain more than 190 laws worldwide to provide protections for people treated in the mental health system, including restraint restrictions.

[10] “Reducing the Use of Restraints,” The Justice Center for the Protection of People with Special Needs, https://www.justicecenter.ny.gov/reducing-use-restraints