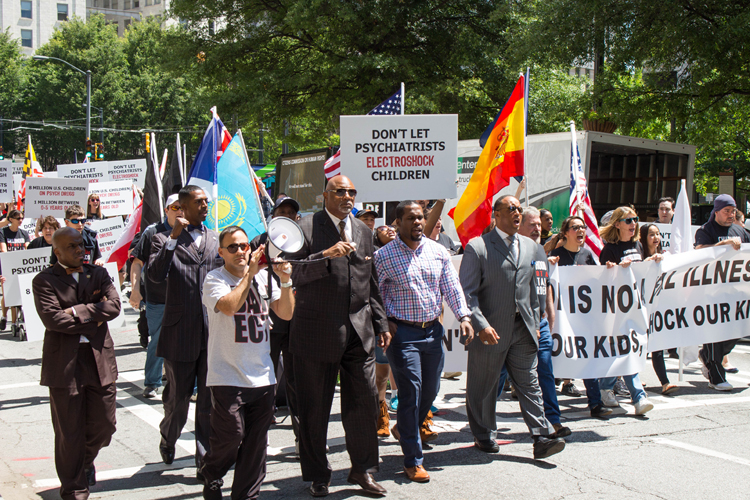 “The father of American psychiatry is a symbol of scientific racism and its institutional and systemic abuse. As the APA says it hopes to make amends for its role in perpetrating racism, let’s start with removing the statues that glorify Rush.” – Rev. Fred Shaw

In light of the American Psychiatric Association’s (APA) recent public apology for psychiatry’s “role in perpetrating structural racism,” Citizens Commission on Human Rights International and its Task Force Against Racism & Modern-Day Eugenics, is calling for statues of the “father of American psychiatry,” Benjamin Rush (1746-1813) to be removed from the site of the Navy’s Bureau of Medicine and Surgery in Washington, D.C. and Dickinson College in Carlisle, Pennsylvania.[1] Despite being a signer of the Declaration of Independence and equal rights for all, the psychiatrist had been a slave owner. The groups point to 1792, when Rush declared that Blacks suffered from a “disease” called Negritude that he theorized derived from leprosy, the cure of which was when their skin turned “white.” “That makes him the father of psychiatric racism in this country,” says Rev. Fred Shaw, a founder and spokesperson for the Task Force.

Rush couched his theories in spurious humanitarian, medical terms, CCHR says, when he wrote that “Whites should not tyrannize over [Blacks], for their disease should entitle them to a double portion of humanity. However, by the same token, whites should not intermarry with them, for this would tend to infect posterity with the ‘disorder’…attempts must be made to cure the disease.”

Until 2015, the Benjamin Rush seal served as the APA’s logo. The APA still bestows a “Benjamin Rush Award,” which the Task Force and CCHR want cancelled.

CCHR says Rush’s invented negritude label and “medical segregation” was an early version of today’s “medical model” that psychiatry is still criticized for, in that Rush used a “biological” justification to have Blacks segregated to prevent them “infecting” others.

Rush also considered that Blacks were able to easily endure surgical operations and pain, labeling this “pathological insensibility.”[2] This idea permeated across the globe. For example, anesthetics administered before electroshock treatment is administered prevent spinal and bone fractures when up to 460 volts are sent searing through the body, causing a grand mal seizure and brain damage. But in South Africa, anesthesia was denied Blacks, with P.J. Henning, the Chief of Psychiatric Services in the 1970s, justifying this, stating: “We don’t use anesthetics for non-whites. It’s simply too expensive, too slow and too risky. Africans appear to be more susceptible to the effects of anesthetics, and because we treat more Africans than whites we would have to double our staff if we used anesthetics.”[3]

Dickinson College was founded by Rush and on its website says Rush was a committed abolitionist. It makes only small mention of his “negritude” theory as well as his holding a negative view of Native Americans and their culture and doubted their potential for citizenship.[4] This does not go far enough, Rev. Shaw says.

Rush also employed bloodletting, darkness, solitary confinement and a special technique of forcing the patient to stand erect for two to three days at a time, poking them with sharp pointed nails to keep them from sleeping. This was borrowed from a British technique for taming horses. He invented the “tranquilizer” chair into which the patient was strapped hand and foot along with a device to hold the head immobile.

CCHR and the Task Force detail the history of abusive treatment of minorities and how traditionally in the mental health system, medical semantics have been used to redefine torture as “therapy.” “Excessive involuntary commitment and use of damaging antipsychotics and electroshock without anesthetic have been trademark treatments for African Americans throughout history,” Rev. Shaw said. “The father of American psychiatry is a symbol of scientific racism and its institutional and systemic abuse. As the APA says it hopes to make amends for its role in perpetrating racism, let’s start with removing the statues that glorify Rush.”

In 2013, the Report of Juan E. Méndez, then UN Special Rapporteur on Torture wrote: “Deprivation of liberty on grounds of mental illness is unjustified…factors such as fear and anxiety produced by indefinite detention, the infliction of forced medication or electroshock, the use of restraints and seclusion, the segregation from family and community, should be taken into account.”

Méndez called for “an absolute ban on all forced and non-consensual medical interventions” such as “electroshock and mind-altering drugs….”[5]

“This would be an amends the APA could do for all: stop using electroshock and support its prohibition,” Shaw stated. Globally, he points to studies and surveys, especially of medical students about psychiatry’s poor image because of its use of such invasive treatments. “The APA needs to take decisive action when it comes to its proposed amends to African Americans. Remove Benjamin Rush as an icon and stop using abusive treatments on us,” Shaw advised.

A paper in European Psychiatry determined that “the image of psychiatry and psychiatrists may be affected by aspects not strictly related to stigma: the past of psychiatry includes dark centuries in which asylums and pre-pharmacological interventions (physical restraints, coercion, etc.) have been adopted” and “Psychotropic medication and ECT are seen as more negative interventions.”[6]

The World Psychiatric Association reported that “…the validity of psychiatry’s diagnostic definitions and classification systems is increasingly questioned also from inside psychiatry. In addition, confidence in the results of therapeutic intervention studies is waning.”[7]

Shaw and the racism task force plan to officially ask the Naval Base and Dickinson College to remove the Rush statue or, minimally add a plaque that the Task Force will provide wording for, detailing his role in “perpetrating structural racism.”

[3] CCHR International and South Africa, “The Tragedy of Psychiatry Creating Apartheid,” Submission to the SA Truth & Reconciliation Committee, May 1997, point 3.69, interview with Leon Prinsloo, reporter of the Soutpansberg Review.

[6] “EPA guidance on how to improve the image of psychiatry and of the psychiatrist,” European Psychiatry, 2015, https://www.behaviorismandmentalhealth.com/wp-content/uploads/2015/09/EPA-guidance-on-image-of-psychiatrists-2015.pdf