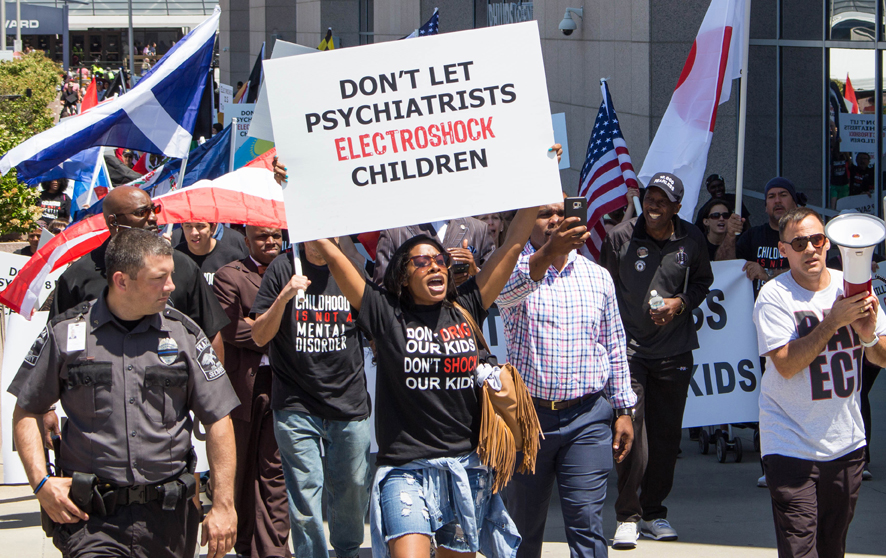 “Clearly something was wrong within the FDA which has not been corrected, as it allows electroshock to be given to children, some aged five or younger, despite massive opposition to the ECT device and a United Nations condemnation of involuntary or coercive ECT as torture.” – Jan Eastgate, President CCHR International

After decades of controversy and United Nations allegations of torture, the Food and Drug Administration (FDA) has banned a shock device used on individuals with intellectual disabilities, largely at the Judge Rotenberg Center in Massachusetts. On March 4, the FDA issued a Final Rule banning the use of electrical stimulation devices (ESDs) for use in aversive practices, which involves inflicting pain to condition behavior. After 25 years, the FDA finally admitted that the device they had approved in 1994 could cause pain, skin burns, trauma, and tissue damage among other serious risks, warranting a ban.[1]

A victory for patients’ rights and for the many disabilities rights groups and legislators that have fought hard to ban the practice, the Citizens Commission on Human Rights International (CCHR) says the FDA’s handling of this was appalling: It took over 20 years for the FDA to do the right thing. Let’s not wait another two more decades for them to figure out that electroshock ‘treatment,’ used on 100,000 Americans, including children and the elderly, is far, far worse.

The Judge Rotenburg Center’s (JRC) ESD, called a Graduated Electronic Decelerator (GED) was classified by the FDA as an Aversive Conditioning Device.[2] As FDA states, researchers considered pain or discomfort to be an indicator of “effectiveness.”[3]  This rationale is as absurd as the idea that inducing a grand mal seizure through electroconvulsive therapy, or ECT, is ‘effective’ treatment for mental disorder

With ESD, electrodes are attached to the arms, legs, or stomachs of students that emit 60 volts and 15 milliamps of electricity in two-second bursts—sometimes up to 77 times a day. It was refined and patented by Matthew Israel, a Harvard-educated psychologist, and co-founder of JRC and the milliamps were increased to 41 and the voltage to 66.[4] Neither the revised GED-3A nor the GED-4 were ever cleared or approved by FDA.[5]  This is testimony to the FDA’s lack of oversight.

A member of an FDA advisory panel looking into the GED in 2014 noted that a 20-milliamps shock can cause first-degree burns.[6] In comparison, electroshock treatment (ECT) uses up to 460 volts and about 900 milliamps—nearly 22 times the amps used by ESDs.[7] While any amount of current over 10 milliamps is capable of producing painful to severe shock, currents between 100 and 200 milliamps can be lethal.[8]

Egregiously, this is what passes as ‘mental health care’ today. CCHR calls for Congressional intervention into how, under the guise of ‘science,’ the FDA can repeatedly ignore victims, their families, experts, legislators and the United Nations that were opposed to both ESDs and ECT devices and kept them on the market.

ESDs pose risks such as suicidality, chronic and acute stress, nightmares, flashbacks of panic and rage, insensitivity to fatigue or pain, changes in sleep patterns, loss of interest and difficulty concentrating. [9] “Trauma becomes more likely, for example, when the recipient does not have control over the shock or has developed a fear of future shocks, neither of which is an electrical parameter of the shock,” the FDA’s Final Rule states.[10]

But ECT has the same effect on patients who are forced to undergo it and the FDA allows it this draconian and brutal practice to continue.  FDA recognizes ECT can cause pain/somatic discomfort; skin burns; physical trauma (including fractures, contusions, injury from falls, dental and oral injury); prolonged or delayed seizures; pulmonary complications; cardiac arrhythmias; heart attack; blood pressure problems, stroke; memory loss; and death.[xi]  Permanent brain damage is also a risk.[12]

FDA said it considered approximately 300 comments about ESD that included “parents of individuals with intellectual and developmental disabilities.” “The overwhelming majority of comments supported” a ban. [13]

There were over 3,000 comments in response to a proposal FDA made about reducing the risk classification of the ECT device—despite no clinical trials proving safety and efficacy. Nearly 80% were opposed the proposal—more than 2,300 individuals or nearly eight times the opposition expressed regarding ECDs. Many also recommended electroshock to be banned but FDA ignored this as “anecdotal” and reduced the risk category in December 2018.

In 2011, Israel was indicted on two counts of criminal behavior related to the repeated, painful application of electric skin shocks to two children and a subsequent attempt to cover it up. He was forced to resign and serve five years’ probation.[14]

In 2013, the UN Committee against Torture wrote that the use of “skin shocks” to “treat” people with mental disorders or developmental disabilities was “torture.”[15] It called on the US Department of Justice to investigate possible violations of civil rights laws.[16]

Dr. Israel had developed a variety of methods to punish children before inventing the shock device, including spraying kids in the face with water, shoving ammonia under their noses, pinching the soles of their feet, smacking them with a spatula and forcing them to wear a ‘white-noise helmet’ that assaulted them with static.[17] That alone should have been a warning bell for the FDA when they approved the GED.

In January this year, CCHR wrote to the FDA Commissioner Stephen Hahn seeking his help to execute a ban on ESDs.[18] In February, eight senators signed a letter sent Dr. Hahn also requesting immediate action. One of the signatories, US Senator Patty Murray stated: “It is unconscionable that in 2020, it is still legal to shock children and adults with disabilities to control behavior.”[19]

Add to this the opposition to the GED for more than a decade by Disability Rights International, hundreds to thousands of petition signatures supporting the ban, and the FDA’s neglect is unfathomable. Laurie Ahern, president of Disability Rights said in response to the ban, “Finally, the residents there might find some freedom from horrific pain and fear and live the rest of their lives in peace.”[20]

Susan Mizner, director of the ACLU’s Disability Rights Program, had the following reaction: “Using what are essentially human cattle prods to shock people with disabilities into compliance is simply barbaric. For over 40 years, the disability rights movement has fought to ban the use of abusive ‘behavioral treatment’ methods such as these ESDs. The FDA’s decision today banning their use should be seen as a necessary and important first step to securing a broader prohibition on the use of aversive interventions.”[21]

Clearly something was wrong within the FDA which has not been corrected, as it allows electroshock to be given to children, some aged five or younger, despite massive opposition to the ECT device and a United Nations condemnation of involuntary or coercive ECT as torture.

The FDA has only banned two other products in more than 40 years of regulating medical devices―powdered surgical gloves, which can cause allergic reactions, and fake hair implants, which caused infections and didn’t work.[22] Yet ECT that can cause permanent brain and cognitive damage and memory loss remains on the market.

CCHR urges people to sign the petition to ban electroshock.

CCHR is the mental health watchdog responsible for more than 180 laws that now protect patients from damaging practices. DONATE to support its work.

[20] “US bans shock ‘treatment’ on children with special needs at Boston-area school,” The Guardian, 5 Mar. 2020, https://www.theguardian.com/us-news/2020/mar/05/us-bans-electric-shock-treatment-children-boston-area