“In lieu of governments taking effective legislative action to protect patients against unsafe and harmful practices in for-profit and state psychiatric facilities, an army of attorneys and prosecutors could curb the massive abuse in the mental health industry by litigating and establishing precedents of protection.” – Jan Eastgate, President CCHR International

Allegations continue to be rife, exposing sexual assault, fraud and patient abuse in private psychiatric hospitals—with the for-profit behavioral sector accused of putting profits before patient safety. Factoring in media reports covering one month alone—March 18 to April 18—ten psychiatric facilities in nine U.S. states and one in the UK, owned by three different U.S. hospital chains, have come under scrutiny.

It begs the question how any local council or government agency, including the Center for Medicare and Medicaid Services, continues to fund or allow such psychiatric facilities to operate. And given the ongoing exposure of abuses in the mental health system why criminal and civil accountability is failing to protect patients.

An attorney firm speaking on behalf of a private psychiatric hospital company indicted in December 2018 over illegally detaining patients, claimed that criminal prosecution “ignores legislatively enacted blanket immunity which allows medical professionals discretion in treatment and ultimately in the good-faith decision to discharge.”[1] (Emphasis added) Governments and law enforcement must remove any “blanket immunity” and ensure that treating psychiatrists, staff and corporations are held equally accountable to any lay person who assaults, criminally neglects or otherwise abuses individuals.

Despite serious allegations against private behavioral hospitals, some companies are expanding their business—for example, Laurel Ridge in San Antonio, Texas, owned by Universal Health Services (UHS) is expanding the facility to treat members of our military.[2] 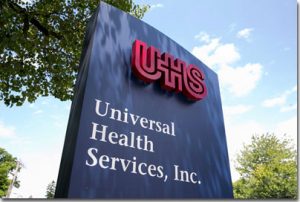 On 12 April 2019 Becker’s Hospital Review warned that UHS “can’t dodge claims it held patients illegally, investors say.”  Shareholders have been in a legal fight with UHS since 2017 (amended in November 2018) and argue the King of Prussia, Pa.-based hospital operator can’t dismiss claims it fueled revenues by exaggerating patients’ risk of suicide and involuntarily committing them to its psychiatric hospitals. The company and its behavioral health facilities are also the subject of an ongoing investigation by the Department of Justice. In the fourth quarter of 2018, UHS said it added $31.9 million to its reserve for the investigation. The reserve now totals about $123 million.[3]

On April 18, 2019, The Dallas Morning News reported that a lawsuit was filed in Dallas County district court, accusing staff of the now closed UHS-owned Timberlawn behavioral hospital of negligence and “inhuman character” that allowed a 13-year-old girl to be raped in 2017.  The father of the girl filed the suit alleging that under Timberlawn’s care, a 17-year-old male patient sneaked into his daughter’s room one evening and raped her.[4]

Following the incident, federal hospital inspectors launched an investigation and found the hospital had placed the boy and girl in rooms near each other and had falsified paperwork to make it look as if the two were in a public area at the time of the assault. They also found the floor was understaffed that night. As The Dallas News reported, “State regulators moved to revoke Timberlawn’s license, saying it was too dangerous for patients. But before that could happen, UHS shut down the 100-year-old hospital in early 2018….”

On 4 April, WAVY TV ran the story of a 16-year-old male patient at UHS-owned Newport News Behavioral Health Center in Virginia, strangling a staff member and absconding from the facility. The boy held the staff member by the neck from behind, told a 17-year-old boy to take the person’s keys and walkie talkie, then the two left but the 17-year-old was stopped by other staff members. The staff member was taken to a hospital with non-life-threatening injuries. The article covered another incident where 17-year-old Raven Keffer died while in the facility’s care in June 2018. She had just been medically discharged from a rehab program in Arlington and transferred to the UHS facility. She felt extremely ill and complained to staff about pain in her chest, and was repeatedly throwing up, even throwing up blood.[5] A former Newport News Behavioral Health Center staffer said that Raven’s pleas for medical care were ignored by facility staff. The Department of Behavioral Health and Developmental Services investigated Raven’s death and found that the facility violated more than a dozen standards of care, including depriving the teenager of appropriate services and treatment, failing to document her significant medical concerns, and failing to note her health complaints.[6]

Not a week later, on 10 April 2019, UHS-owned Palmetto Pee Dee Behavioral Health in Florence, South Carolina was facing new criticism following a 12-year-old boy escaping from the facility and claiming he had been abused, beat up, and bullied while in the facility.  Former residents, having heard the boy’s story, came forward with their own allegations concerning the facility. One told media that a staffer would “physically abuse the little (autistic) kids punch(ing) them in the stomach.” In March, the S.C. Department of Health and Environmental Control (SCDHEC) cited the facility for multiple violations including the mishandling of patients, inadequate monitoring of patients, insufficient staffing and failed supervision.[7]

In January 2019, Nicola Seahorn, a former employee of Georgetown Behavioral Health Institute in Texas, owned by Signature Healthcare Services, filed a lawsuit after reporting to state regulators she saw an employee punch a patient in the face. The alleged incident occurred in June 2018. Two weeks later Seahorn was fired. The Texas whistleblower statute cited in Seahorn’s lawsuit bans employers at mental health facilities from disciplining, firing or otherwise punishing employees who report violations of state laws or rules. [8]

Seahorn’s lawsuit comes at a time when the 5-year-old hospital is facing scrutiny by state regulators:

A month earlier, on March 18, the Reveal News story headlined, “US government uses several clandestine shelters to detain immigrant children,” exposed that Acadia-owned Millcreek psychiatric facility in Arkansas and Rolling Hills psychiatric hospital in Oklahoma, had been giving residential treatment to immigrant minors, with Millcreek ”holding at least eight children in the refugee agency’s custody.” Rolling Hills had at least one child. An investigation by The Oklahoman published earlier this year revealed that patients complained of broken bones, along with “allegations of sexual harassment and physical abuse” at the hospital.

In November, 2018 a critical investor detailed a litany of abuse allegations at Acadia-run facilities, including Rolling Hills. A December 2017 lawsuit also accused Acadia and Rolling Hills of permitting ongoing sexual abuse inside a facility for children, destroying video evidence and refusing access to a state investigator.[19]

Then there’s Sundance Behavioral Healthcare System that closed three facilities in North Texas in December 2018 after a Tarrant County grand jury indicted the company and a psychiatrist for allegedly holding patients against their will.[20] Investigators alleged Sundance illegally detained patients for longer than 48 hours and, in some cases, also allegedly refused to allow voluntary patients to leave the facility. Criminal District Attorney Sharen Wilson said in a statement, “These offenses were a corporate failure, and the corporation must be held accountable.”[21]

However, if fines and criminal accountability were made a greater deterrent in the behavioral health/psychiatric industry, lives could be protected.  As media reported in February this year, inspectors from the Texas Health and Human Services Commission visited the Sundance hospital numerous times, finding problems with the care in 2016. Yet the hospital only received fines of $28,500 in August 2016 and $650 in 2017 for not holding required fire drills, according to NBC.[22]

The indictment is appropriate criminal response that should followed across the country and in the UK, where large U.S. behavioral hospital chains have a monopoly on mental health in the private sector.

Astoundingly, UHS recently unveiled plans to build a behavioral health hospital—an extension of Laurel Ridge Treatment Center in Texas—targeting first responders and military veterans for treatment.  Laurel Ridge’s program services more than 100 military installations in San Antonio, as well as across the United States and in other countries.[24]

In 2016, a family filed a $1.5 million lawsuit against Laurel Ridge Treatment Center alleging the center failed to protect their daughter, who was sexually assaulted by a counselor, Alexander Williams.  Williams was arrested on multiple charges of sexual assault of a child and sentenced to eight years in prison.[25]

CCHR says that in lieu of governments taking effective legislative action to protect patients against unsafe and harmful practices in for-profit and state psychiatric facilities, an army of attorneys and prosecutors could curb the massive abuse in the mental health industry by litigating and establishing precedents of protection.

Ultimately, governments should also be implementing a “no tolerance” policy regarding psychiatric facilities endangering patients’ lives.