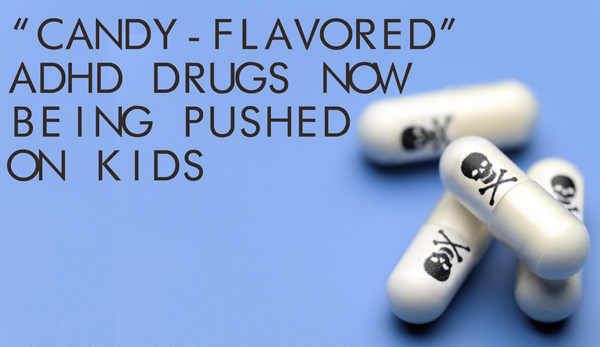 “There's no candy coating the fact that the U.S. Drug Enforcement Administration categorizes ADHD drugs in the same highly addictive class of drugs as cocaine, opium and morphine or that ADHD drugs carry more than 44 international drug regulatory warnings citing side effects of mania, psychosis, hallucinations, drug dependence and even death.”

The psycho-pharmaceutical industry is very interested in kids. So interested,  that it’s now targeting children with the irresistible lure of tasty, candy-coated ADHD drugs and imaginary ADHD Superheroes.

But there’s no candy-coating the fact these fruity tasting ADHD drugs share the same Schedule II category as cocaine, morphine and opium and, as such, the U.S. Drug Enforcement Administration (DEA) warns that Adderall and Ritalin are “defined as drugs with a high potential for abuse…with use potentially leading to severe psychological or physical dependence,” and are considered “dangerous” drugs.[1]

Add to these dangers the fact that there is no test for the completely subjective psychiatric diagnosis of ADHD, which was made clear with the National Institute of Health (NIH) Consensus Statement: “We do not have an independent, valid test for ADHD,” and “There are no data to indicate that ADHD is due to a brain malfunction.”[2]

However, regardless of no known cause for the subjective ADHD diagnosis, nor any clue about how the psychiatric drugs actually work as “treatment” for ADHD, the psycho-pharmaceutical industry is expanding the already overprescribed child and adolescent amphetamines market with new chewy, melt-in-your-mouth, candy-flavored pills.[3]

The potential short and long-term profits associated with direct-to-children-candy-coated-pill marketing will certainly increase what many already believe are ADHD drug prescriptions at epidemic levels. For instance, according to IMS Health Vector One National Database for 2013, nearly four-and-a-half million kids between the ages of 0-17 were prescribed ADHD drugs and, of those, 188,899 were zero to five year olds—essentially toddlers and preschoolers being prescribed “dangerous” and highly addictive drugs.[4] 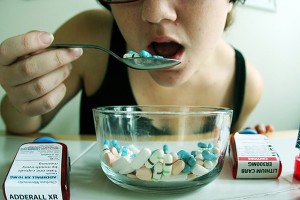 Given the known serious adverse effects associated with ADHD drugs, one might reasonably expect efforts to curb the pharmaceutical industry’s marketing directed toward children. Rather, though, words like subtle, novel, sophisticated, and creative have been used to explain the pharmaceutical industry’s marketing schemes to reel in children and, ultimately, expand profits.[5]

Adzenys, manufactured by Neos Therapeutics, is the first of the candy-like ADHD drugs that actually dissolves in the mouth. This cocaine-like “treatment” was approved by the Food and Drug Administration (FDA) in January for children ages 6 years and older, and the chewable, fruity-flavored drug comes in a convenient blister pack for easy pop-in-the-mouth-and-go “treatment.”[6]

Sounds so very Mary Poppins-spoon-full-of-sugar, but what’s the downside to the candy-flavored drug? There are many. According to the drug label, just psychiatric adverse reactions for Adzenys include: “CNS stimulants, at recommended doses, may cause psychotic or manic symptoms, e.g., hallucinations, delusional thinking, or mania in patients without prior history of psychotic illness or mania.”[7] 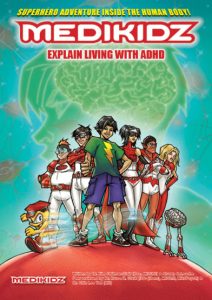 But candy-flavored drugs are not the first attempt by the psycho-pharmaceutical industry at  marketing to children. In an attempt to explain ADHD to children, the psycho-pharmaceutical industry also has been supporting ADHD-themed comic books through Medikidz, a children’s medical education organization, that publishes more than a dozen comic books, dealing with a host of healthcare issues, including ADHD: Medikidz Explain Living with ADHD.[8]

While Medikidz uses several Superheroes, like Skinderella (skin and 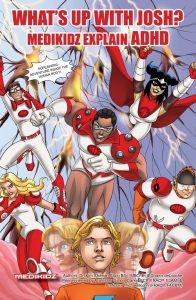 bone issues), Gastro (gastro/intestinal system), and Pump (heart and blood disorders), Axon, “the brain specialist,” is ADHD’s Superhero. The imaginary planet, shaped like a human body, is called MediLand and it is here that Superhero Axon takes the child into the brain to understand the alleged complexities of ADHD.

Yes, it would appear that it will take the psycho-pharmaceutical industry relying on imaginary Superheroes to fill children’s minds with comical, not scientific, reasons for having been diagnosed with the psychiatric disorder, ADHD and, thus, benefit from the pharmaceutical’s drug “treatment.”

The problem with Superheroes, though, is that they are imaginary and the information the ADHD Superhero provides does not reflect the findings of the lowly mortals back on Earth at the National Institute of Health, which remains clueless about the causes of ADHD, openly admitting that “there are no data to indicate that ADHD is due to a brain malfunction.”[9]

And, although the pharmaceutical industry argues it is not directly targeting children, the ADHD comic book, for example, is sponsored by Shire Pharmaceuticals, which also, coincidentally, happens to market several ADHD drugs, including Adderall. In 2013 Shire subsidized 50,000 copies of the comic book and the fantasy surrounding ADHD appears to be working.[10] Since 2002, sales of ADHD drugs have increased exponentially from $1.7 billion to nearly $9 billion in 2012.[11]

In a fictional world Superheroes are capable of extraordinary superhuman knowledge and abilities.  In the real world, though, candy-coating dangerous ADHD drugs doesn’t make them safe or effective, and using Superheroes to describe non-existent brain disorders doesn’t make them real. In the real world, people who push on children harmful drugs, disguised as candy, aren’t Superheroes, they’re drug dealers…they’re villains.