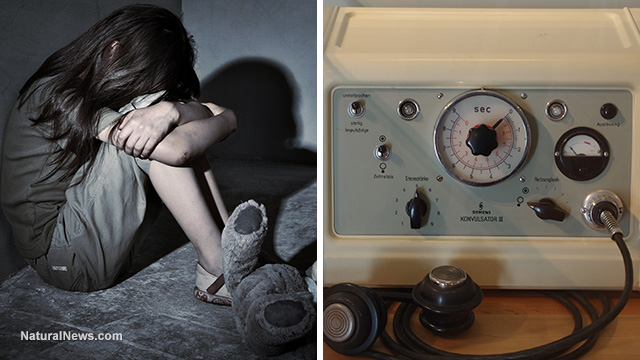 “ECT is a degrading, damaging, memory robbing procedure that should have been outlawed years ago.” — Lee Spiller, Executive Director, Citizens Commission on Human Rights Texas

(NaturalNews) The American Psychiatric Association is pressuring the U.S. Food and Drug Administration to permit the use of electroshock therapy (ECT) on children and adolescents resistant to current therapies and drugs. The treatment, an archaic technique invented in the 1930s, sends jolts of electricity into the brain, inducing a seizure. It’s associated with numerous side-effects, including short and long-term memory loss, cognitive problems, unwanted personality changes, manic symptoms, prolonged seizures, heart problems and death.

As recently reported, the FDA is considering a draft rule to declassify the risk of electroshock therapy or electroconvulsive therapy, from a Class III device, the highest risk category, to a Class II, defined as moderately risky. ECT has remained a Class III device since 1979, and is therefore subject to the highest level of regulatory control.

However, if ECT devices are recategorized to a Class II, opponents fear that the treatment could be used on a much larger population, which now may include children, because the devices would be eligible for “off-label” use.

If the FDA grants the APA’s request, children unresponsive to psychiatric drugs will be subjected to the harsh and arguably inhumane treatment.

“ECT is a degrading, damaging, memory robbing procedure that should have been outlawed years ago,” said Lee Spiller, Executive Director of Citizens Commission on Human Rights. “Shock machines are one of a number of devices that were on the market prior to today’s laws. They were essentially grandfathered in.” Join the Protest in Atlanta, Georgia, on Saturday, May 14 at 10:30 a.m. EST, against the APA’s push to subject children and teenagers to electroshock therapy.

Citizens Commission on Human Rights is holding a rally in Atlanta, Georgia, on Saturday, May 14 at 10:30 a.m. EST, to protest the APA’s push to subject children and teenagers to electroshock therapy. CCHR is a non-profit mental health watchdog group dedicated to eliminating “abuses committed under the guides of mental health.”

The event will march in protest at the APA’s annual convention in downtown Atlanta.

The drugging of America’s youth

Currently, approximately 8 million children in the U.S. aged zero to 5-years-old, are being prescribed psychiatric drugs, including antidepressants and antipsychotics, as well as drugs for anxiety and ADHD, states CCHR.

Rather than curb this epidemic, the APA wants to subject children and teenagers to more harmful treatments, including electroconvulsive therapy, which has the ability to permanently damage one’s cognitive abilities. The Dallas Morning News reported that the treatments cost $4,000, 99 percent of which is paid for by insurance.

“We also recommend that the class II designation include ECT treatment for children and adolescents meeting the criteria for treatment resistance and in need of a potentially life-saving intervention for the conditions previously indicated and for MDE [Major Depressive Episode] associated with major depressive disorder or bipolar disorder.” [Emphasis added]

The long-term impacts of electroconvulsive therapy on children are largely unknown, which is why the procedure is regulated in 13 states. Texas and Colorado currently ban the treatment for use on children 16 and younger; Missouri requires a court order; while Tennessee permits ECT for children only if they have been diagnosed with mania or severe depression.

Children “eligible” for ECT would include patients with the following disorders who have not responded to treatment: “catatonia, manic episodes (in bipolar disorder), schizophrenia, and schizoaffective disorder.”

Electroshock therapy may cause death

The APA claims that ECT is rarely used on children and teens; however, that could soon change under the newly suggested provision.

“When a decision is made to use ECT in a child or adolescent, it is virtually always related to significant functional disability with a lack of response to other treatments and/or the existence of severe and potentially life-threatening symptoms such as inadequate oral intake due to catatonia, significant suicide risk, or extreme and repeated self-injury,” wrote the APA.

It claims that ECT effectively reduces suicide among children; however this is based on retrospective studies, which often include data of lower quality because it’s based on reports given from memory.

The APA says no children or teens have died from ECT; however, this claim may be inaccurate, as ECT-related deaths are often blamed on other causes, such as heart failure or suicide. On the other hand, ECT-related adult deaths have been reported. Six patients in Texas died within two weeks of receiving the treatment in 2014; four of the deaths were ruled as suicides.

Click here to read the story of a woman who underwent electroshock therapy. The treatment caused her to lose her job, and left her disabled, unable to care for herself.