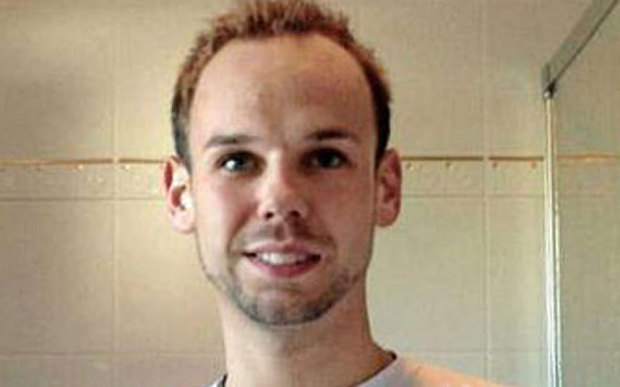 “Germanwings co-pilot Andreas Lubitz who purposefully crashed Flight 9525 into the French Alps, killing all 150 people on board had spent 18 months overall under psychiatric treatment, Bild reported on Friday, citing anonymous sources within Lufthansa, Germanwings’ parent company. The pilot was diagnosed with a ‘severe depressive episode’ in 2009.”

Numerous reports are now surfacing that Germanwings co-pilot Andreas Lubitz who purposefully crashed Flight 9525 into the French Alps, killing all 150 people on board, had in fact been under psychiatric care.  What media are not reporting is the fact that Lubitz, in all likelihood was under the influence of antidepressants, drugs documented to cause depersonalization, mania, psychosis, and even homicidal ideation,  considering he spent more than 18 months undergoing “psychiatric care.”  Moreover, Lubitz would not be the first commercial pilot to purposefully crash a plane while under the influence of psychotropic drugs— In 2010, the National Transportation Safety Board (NTSB), issued a report on the probable cause of a 2008 plane crash in Mount Airy that killed everyone on board, showing that toxicology tests revealed the pilot had the antidepressant Zoloft in his system.  The NTSB report stated, “Officials say the pilot ‘displayed non-professional behavior’ and that a cockpit voice recording documented the pilot singing, ‘Save my life, I’m going down for the last time’” shortly before crashing the plane.

According to Reuters, “The pilot who appears to have deliberately crashed a plane carrying 149 others into the French Alps received psychiatric treatment for a ‘serious depressive episode’ …. Citing internal documents and Lufthansa sources, Bild said Lubitz spent a total of one and a half years in psychiatric treatment.” 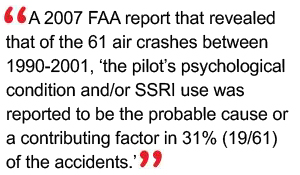 The Guardian reports, “Investigators searching the Düsseldorf apartment of the co-pilot on the Germanwings flight that crashed into the French Alps on Tuesday have found evidence he hid an illness from his employers, prosecutors said on Friday. The evidence is a torn-up doctors’ note, signing him off work on the day of the crash. ‘Medical documents were found that indicate an ongoing illness and suitable medical treatment,’ Düsseldorf prosecutors said in a statement.”

Mirror states that, “Killer co-pilot Andreas Lubitz was treated in hospital just two weeks before the plane crash which killed 150 people. The 27-year-old attended a clinic at the University of Dusseldorf Hospital in February and March. The most recent visit was March 10, exactly a fortnight before he guided the Germanwings Airbus A320 into its fatal descent. The hospital said Lubitz attended for ‘diagnostic evaluation’ but insisted he was not treated for depression…. They confirmed he was suffering from a serious illness which he had concealed from his employers Germanwings. One of the sick notes was reportedly signed by either a local neurologist or psychologist.”

While the psychotropic drug policies of Lufthansa, the parent company of Germanwings, are unknown,  in the U.S, the Federal Aviation Administration (FAA) allows the use of antidepressants among pilots, a policy instituted in 2008,  This is despite the fact there have been 134 regulatory warnings from eleven countries, including the United Kingdom, Canada, Japan, Australia, New Zealand, Ireland, Russian, Italy and Germany on antidepressants causing suicidal ideation.

Given the increasing number of questionable aircraft disasters, which, on their surface, provide no rhyme or reason for a motive, one may begin to question the use of antidepressants, especially in light of a 2007 FAA report that revealed that of the 61 air crashes between 1990-2001, “the pilot’s psychological condition and/or SSRI use was reported to be the probable cause or a contributing factor in 31% (19/61) of the accidents.”

The fact is, whether Lubitz was on psychiatric drugs, or in withdrawal from them, there is enough evidence to show that the use of antidepressants or other mind-altering psychiatric drugs by commercial pilots, in the U.S. and abroad, should be banned.