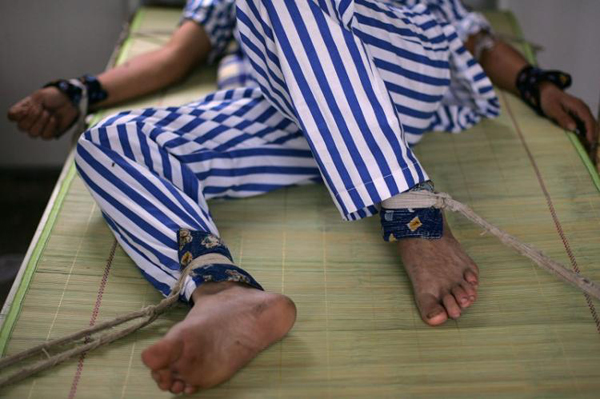 “They tied me up and fed me drugs intravenously. This has happened four times already.” — Yue Lina, petitioner who has been committed to a mental institution several times for petitioning against the local government

The practice of locking up those who challenge the ruling Chinese Communist Party in mental institutions has become an endemic rights abuse in the country’s legal system, according to a recent report.

In the past year, authorities have increasingly used the tactic against rights activists and dissidents as a way of imposing indefinite periods of detention on them without the need for a trial, the Hubei-based Civil Rights and Livelihood Watch group said in its annual report.

The 2013 Mental Health law, which was aimed at protecting mental health service users from misdiagnosis and involuntary medical treatment in China’s state-run psychiatric hospitals, has done little to improve the situation, the report found.

While the law is the first in the country to define the concepts and procedures linked to compulsory committal of psychiatric patient, authorities are continuing to detain, forcefully medicate and otherwise mistreat Chinese citizens who lodge complaints about or criticize the ruling Chinese Communist Party, it said.

The group’s report for 2014 said the system of involuntary psychiatric treatment of government critics, known colloquially as “being mentally illed,” could yet become further entrenched, in spite of the legislation.

“Why is it that we have the Mental Health Law, and yet the phenomenon of being mentally-illed is getting worse?” the group’s founder Liu Feiyue told RFA on Thursday. “The judiciary isn’t able to implement it properly, nor can it effectively act as a check on state power.”

“The system we have in China is still above the law, especially given that stability maintenance trumps everything, including the judiciary,” Liu said.

“Under such circumstances, it’s hardly surprising that people are still being [considered] mentally-illed.”

He said the only way to prevent such practices would be through the rule of law. “We would have to change this dictatorial way of doing things,” he added. 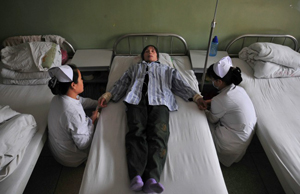 The report found that activists and petitioners “under treatment” were detained, tied up, beaten, forced to wear manacles and leg irons, and forcibly fed psychoactive drugs.

According to the report, many of those forcibly committed to psychiatric institutions are kidnapped by authorities, who don’t inform or consult their relatives, or seek the consent of the “patient.”

The report found that activists and petitioners “under treatment” were detained, tied up, beaten, forced to wear manacles and leg irons, and forcibly fed psychoactive drugs, as well as denied access to the outside and to visits from their friends and family.

The hospitals would often refuse to discharge them without the agreement of law enforcement agencies, and inmates were often coerced into signing “guarantees” that they wouldn’t pursue any further complaints or lawsuits against the government before being released, it said.

They were also forced to sign gag orders promising not to reveal what happened to them inside the hospital, it said.

Henan-based petitioner Yue Lina said she has been committed to a mental institution several times for petitioning against the local government.

“They tied me up and fed me drugs intravenously,” Yue said. “This has happened four times already. I still suffer from post-traumatic stress disorder because of it.

“They carted me off to the psychiatric hospital without telling my parents, and officials from the village government confiscated my cell phone and beat me up.

“All the other patients were allowed to go outside to get some air; I was the only one who wasn’t allowed.

“I wasn’t allowed to watch TV or take a bath, even when there was water.”

Yue said the hospital had “diagnosed” her with a mental disorder.

“I asked for the details of my diagnosis, but they wouldn’t let me have them, and the village government told me that if I asked for my notes again, they’d have the whole of my family committed to the mental hospital,” she said.

According to Liu, the practice of psychiatric “treatment” for those the authorities regard as troublemakers has become endemic to China’s “stability maintenance” system.

“Tiny changes that don’t affect the system will have no impact on this trend towards being mentally-illed in China…which should never be used as a tool to maintain stability,” he said.

“The responsibility for this lies not just with the government, but also with the entire population,” Liu said.