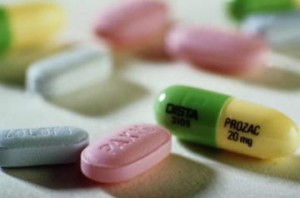 “Regardless of the agenda of the authors, and contrary to the misplaced media hype, the “quasi-experimental” study provides no scientific proof that decreased antidepressant use (because of the “Black box” warnings) increased the rate of suicide attempts."

In an obvious attempt to remove the Food and Drug Administration’s (FDA) “Black box” warnings, placed on all antidepressants, a recently published study in the British Medical Journal (BMJ) claims that “safety warnings about antidepressants and widespread media coverage decreased antidepressant use, and there were simultaneous increases in suicide attempts among young people.”  While media outlets are covering this conclusion without question,  running headlines such as “Black Box Warnings Raise Suicide Attempts” or as USA Today wrote, “Warnings on Antidepressants May Have Backfired, ” none apparently read the study as it fails to produce any scientific evidence that supports its conclusions and, worse still, has little to do with suicide attempts at all.

In a nutshell, the BMJ study suggests that the “Black box” suicide warnings reduced the number of antidepressants being prescribed and, subsequently, there was an increase in suicide attempts in a certain age group over a specific time frame. The problem is neither their logic nor methodology support removing the FDA’s most severe warning on antidepressants.

For example, the study’s authors used a “validated proxy” (representation) for determining “suicide attempts.” Specifically the authors reviewed the number of people admitted to hospitals and emergency rooms due to “psychotropic drug poisonings.”

To make this perfectly clear, the problem with this method is that the data does not actually prove that a person has been admitted because of an intended suicide attempt or, rather, whether there was an accidental overdose of psychotropic drugs. If there was an attempted suicide, one would expect the authors to make public which psychotropic drugs, or combinations, prompted the “psychotropic drug poisonings. One also would expect the authors would want to take this information into consideration as part of the conclusions. They didn’t.

These are all valid questions. But none of them are addressed in the study.

In fact, Columbia Professor of Psychiatry, Mark Olfson, and Michael Schoenbaum of the National Institute of Mental Health (NIMH), responded to these conclusions saying, “Acute care visits for psychotropic drug poisoning is clearly an unreliable measure of suicide attempts.”

Olfson and Schoenbaum further explain that “a more plausible explanation for the reported findings is that the FDA warnings slowed prior growth in the rate of antidepressant treatment. In the following years, there was substantial—but likely unrelated—increase in emergency department visits and hospital admissions by young people in the United States related to the non-medical use of benzodiazepines, stimulants, and other psychotropic agents,” most of which “are not suicide attempts.”

Despite the study’s conclusion, data provided by other respected sources paints a very different picture. 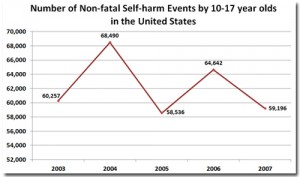 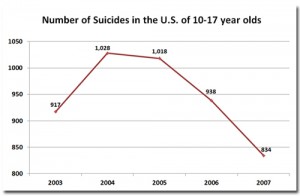 This is quite a different finding from the one provided in the BMJ study, which alleges a 21.7% increase in suicide attempts, and no change in completed suicides in this age group.

Internationally respected psychiatrist, Dr. David Healy, says of the study, “[I]f there has been a true increase in suicide attempts, this parallels an increase in the use of Mood Stabilizers, the clinical trials of which show almost exactly the same increases in suicidal act rates over placebo as is shown for the antidepressants.”

Healy concludes, “There is in summary so little basis in the data presented here for the argument being made that this paper perhaps offers better evidence of an agenda than anything else.”

But regardless of the agenda of the authors, and contrary to the misplaced media hype, the “quasi-experimental” study provides no scientific proof that decreased antidepressant use (because of the “Black box” warnings) increased the rate of suicide attempts.

No one should stop taking psychiatric drugs without doctor supervision.