Note from CCHR— the below article posted in the New York Times exposes the thousands of toddlers being prescribed ADHD drugs. And while startling, the actual figures of zero to five year olds in the United States being prescribed psychiatric drugs is more than 1 million. To see the total figures from IMS Health, click here. 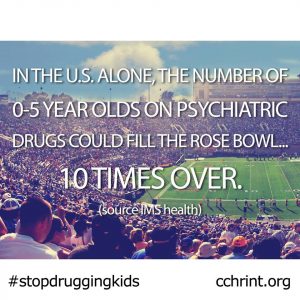 Click image to see breakdown of all children on psychiatric drugs

ATLANTA — More than 10,000 American toddlers 2 or 3 years old are being medicated for attention deficit hyperactivity disorder outside established pediatric guidelines, according to data presented on Friday by an official at the Centers for Disease Control and Prevention.

The report, which found that toddlers covered by Medicaid are particularly prone to be put on medication such as Ritalinand Adderall, is among the first efforts to gauge the diagnosis of A.D.H.D. in children below age 4. Doctors at the Georgia Mental Health Forum at the Carter Center in Atlanta, where the data was presented, as well as several outside experts strongly criticized the use of medication in so many children that young.

The American Academy of Pediatrics standard practice guidelines for A.D.H.D. do not even address the diagnosis in children 3 and younger — let alone the use of such stimulant medications, because their safety and effectiveness have barely been explored in that age group. “It’s absolutely shocking, and it shouldn’t be happening,” said Anita Zervigon-Hakes, a children’s mental health consultant to the Carter Center. “People are just feeling around in the dark. We obviously don’t have our act together for little children.”

Dr. Lawrence H. Diller, a behavioral pediatrician in Walnut Creek, Calif., said in a telephone interview: “People prescribing to 2-year-olds are just winging it. It is outside the standard of care, and they should be subject to malpractice if something goes wrong with a kid.”

Watch: The Drugging of our Children—0 to 5 year olds