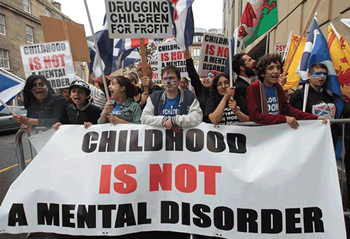 “If an idea goes unchallenged, it eventually becomes accepted as fact, even if there’s no evidence to support the idea being pushed. That’s why the Citizens Commission on Human Rights (CCHR) continues to challenge the unscientific profit-driven label known as Attention Deficit Hyperactivity Disorder (ADHD).”

“The psychopolitician’s realm of defamation and degradation is Man himself. By attacking the character and morals of Man himself, and by bringing about, through contamination of youth, a general degraded feeling, command of the populace is facilitated to a marked degree”

The above quote is from a synthesis of the psychopolitical manual developed and used by Russian psychiatry for subversion of the US and the West. The strategies of this manual, having been passed on through British and American psychiatry are now deployed in service of the architects of the totalitarian New World Order a latterday embodiment of the communist dream.

The labelling and drugging of children described in the article below is an integral component of that programme of subversion of our civilisation. It is also child abuse. There was a time when we only drugged our animals: no nation that wilfully drugs its young can survive. And quite frankly no culture that has sunk to such degradation deserves to.

If an idea goes unchallenged, it eventually becomes accepted as fact, even if there’s no evidence to support the idea being pushed. That’s why the Citizens Commission on Human Rights (CCHR) continues to challenge the unscientific profit-driven label known as Attention Deficit Hyperactivity Disorder (ADHD).

The volume of data produced to try and convince us it is a real condition is quite astounding. Occasionally, however, there are reports that come out that have the potential to rock the psychiatric boat. Research was recently published that pointed to a broader definition being used to diagnose so-called ADHD. Those with experience in running a business will immediately recognise this as a way of expanding the market for whatever product is being sold, which in this case is psychiatric drugs.

The researchers said the broader definition may be leading to needless and potentially harmful treatments for some children, indicating recognition of the dangers associated with the chemical restraints being foisted on young minds. It’s a step in the right direction.

For decades, psychiatrists have been busily reclassifying sets of behaviour and emotions as “mental illnesses”. Strip away all of the psychiatric jargon, and you won’t find a scrap of scientific evidence to support the psychobabble.

The justification for the use of drugs revolves around the idea of a “chemical imbalance” of the brain, but it’s an idea that is a figment of psychiatric imagination. There isn’t a single test that will demonstrate the existence of such an “imbalance”. If the drugs were supposed to resolve an imbalance, you would expect there to be a test to recognise a chemical balance. It comes as no surprise there isn’t a test for that either. It is psychiatric wishful thinking and crystal balling.

The message to psychiatrists using labels like ADHD is clear: childhood is not a mental disorder. Further, children are not experimental animals. They are human beings who have every right to expect protection, care, love and the chance to reach their full potential in life. They will only be denied this as a result of the verbal and chemical straitjackets that are psychiatry’s labels and drugs.