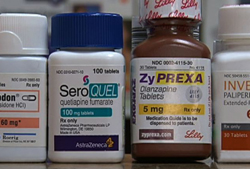 On Feb. 11, 2014, a Chicago jury awarded $1.5 million to an autistic child who developed a severe case of tardive dyskinesia and tardive akathisia while being treated by psychiatrists with Risperdal and then Zyprexa between 2002 and 2007. The drug-induced disorder was diagnosed when he was 15 years old and by then had become disabling and irreversible.

I was the psychiatric expert in the case. I testified that the doctor was negligent in not warning the youngster and his parents about the dangers of so-called antipsychotic drugs, in not educating the parents about the symptoms of tardive dyskinesia so that they could be alert for them, and in not monitoring the child closely enough. Here is a transcript of my complete trial testimony.

The boy was diagnosed with autism as a child and then started on SSRI antidepressants before the age of 6 or 7. He continued to be treated with the antidepressants Zoloft and then Paxil which, I testified, caused his mental condition and behavior to deteriorate. I also presented evidence (here) and (here) that the antidepressant drugs very frequently cause disturbed emotional reactions in children, including disinhibition and mania.

In recent decades, it has become entirely too common for psychiatrists and other prescribers to give psychiatric drugs to children who could be far better treated by other means. The FDA-approved labels for all antidepressants warn not only about increased suicidality in children and youth but also about drug induced aggression, mood instability, anxiety, impulsivity, and mania. The labels for antipsychotic drugs (here) and (here) warn about tardive dyskinesia as a risk for patients across the age spectrum. My own work (here) and (here) has contributed to these label changes, adding to my disappointment at how little attention some doctors pay to these warnings.

There is a continuing need for prescribers, patients and their families to be warned about the dangers of psychiatric drugs and for doctors to take these dangers into account when considering whether or not to prescribe.

Dr. Breggin is the author of many scientific articles and books. His most recent book is Psychiatric Drug Withdrawal: A Guide for Prescribers, Therapists, Patients and their Families. His website is www.breggin.com.

The Chicago attorney in the case was Francis P. Morrissey. The malpractice case was Angel v. Segal, State of Illinois, In the Circuit Court of Cook Count, Illinois, County Department, Law Division, No. 09 L 3496.