The Examiner
December 4, 2013
by Harold Mandel 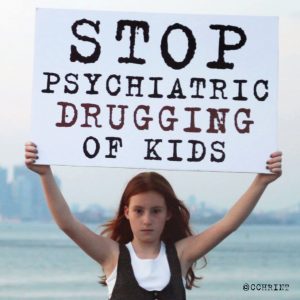 The Citizens Commission on Human Rights (CCHR) is working diligently to eradicate mental health abuses while enacting patient and consumer protections from what psychiatrists push on people. Mental health abuses are an international problem. Brian Daniels, who is the National Spokesperson for the CCHR in the United Kingdom, has written for CCHR International on Dec. 2, 2013, that school classrooms are being turned into labs for ADHD diagnoses and the drugging of kids.

The ADHD label has become unusually common. Daniels points out that we are being blinded from the truth about ADHD by the pseudo-science of psychiatry. His position that the diagnostic criteria for ADHD could describe any normal child’s behavior in school is right on target. It is sad to realize that it is true that clever manipulation and corruption really has been redefined to come up with the psychiatric label of ADHD. Pathetically, this is actually true of all of the psychiatric labels.

Daniels goes on to point out that in describing inattention, which is used to diagnose ADHD, the psychiatric texts say the child, “often avoids, dislikes, or is reluctant to engage in tasks that require sustained mental effort, such as schoolwork or homework,” which is actually descriptive of a normal child. Isn’t this after all how normal kids often behave in a normal school or a normal home, on a normal day, in a normal world, Daniels eloquently states.

Daniels lists another group of characteristics the psychiatrists claim are signs of ADHD, including, “is often forgetful in daily activities, often fails to give close attention to details or makes careless mistakes in schoolwork, work, or other activities, has difficulty sustaining attention in tasks or play activities, often does not follow through on instructions and fails to finish schoolwork, chores or duties in the workplace.” Again, Daniels is right to point out these are normal characteristics. It appears as a matter of fact what we are seeing in these cases are lousy teachers who do not want to take the time to understand their students well, and instead are dumping them off into the cesspool of psychiatry.

It’s also true that defining a kid as being mentally ill with ADHD because the kid “fidgets with hands or feet or squirms in seat, often runs about or climbs excessively in situations in which it is inappropriate, often talks excessively, and is often on the go,” are all dangerous manipulations of defining variations of what is normal in kids. Putting these active kids down with the harsh psychiatric label of ADHD and associated toxic drug treatments is simply stealing the life out of active kids whose potential to do anything in life is being crushed at an early age.

But the psychiatrists really do not care. They have proven to be monsters who have no feelings for anyone aside from themselves. Together with the pharmaceutical companies they are promoting expensive drugs that have turned classrooms into psychiatric labs, as Daniels points out. It actually is not at all normal for psychiatrists to drug kids, chemically restrain them, and tell them they have chemical imbalances in their brains, with no scientific basis for this.

In fact this is all really criminal misbehavior by the psychiatrists who have such a powerful and well funded special interest group they have legalized their tyranny with the lawmakers and the judges. This is not surprising, for after all the very wealthy psychiatrists essentially own the lawmakers and judges and control their lucrative positions in society.

Yes, Daniels is right, the drugging of active children is profit-driven. It’s true that young minds are joining older minds in being sacrificed for profits for the psychiatrists and their inner circles in every walk of life. Psychiatrists are actually redefining normal to mean something else to drive their lucrative industry of death. Yes, again Daniels is right to point out all of this is “psychobabble, it’s dishonest, and it’s junk science.”

Mental health abuses by psychiatrists are a major problem all over the world. We must all look inside ourselves to determine why and how we have allowed this to happen, and than we must join forces to fight to win in the war against psychiatry, just as we have been joining forces in the war against poverty. It is after all psychiatrists who are responsible for creating and enforcing a great deal of the poverty in the world. And it’s the psychiatrists themselves who have declared a war against humanity. The millions upon millions of victims of psychiatry need help to survive after psychiatrists turn what were once beautiful chances to live and produce in this world into a tragic nightmares.