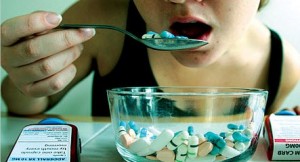 “In the USA alone, there are over 10 million children being given psychiatric drugs, 1 million under five years of age, some before their first birthday, even as young as 1 month, according to the US Department of Health and Human Services.”

(NaturalNews) There is a silent tragedy taking place, mostly in the USA, as countless millions of children of all ages are being erroneously administered doses of amphetamine class drugs multiple times each day. These drugs are otherwise illegal, schedule II, in the same highly addictive group as cocaine, morphine and opium banned in most of the world. Why are innocent children being medically abused in this way?

In any classroom in America today, there is likely to be one, two or three children who do not behave like normal, happy boys and girls, instead walking with a blank zombie-like stare, unwilling to interact meaningfully with friends and others.

These children represent among the worst failures of parents, schools and society towards the young generation, the very future and hope of humanity.

In the USA alone, there are over 10 million children being given psychiatric drugs, 1 million under five years of age, some before their first birthday, even as young as 1 month, according to the US Department of Health and Human Services.

In decades gone by, children with above average intelligence and/or abilities were spotted at an early age and given the opportunity to reach their full potential. Not so these days where such children, keen to be challenged to their gifted potential, are often at the request or demand of schools, or confused, inattentive or intolerant parents, taken to a doctor and given a label such as “attention deficit disorder,” “bipolar disorder,” “attention deficit hyperactivity disorder,” “social anxiety disorder” and others. This is to justify powerful amphetamine class drugs to dumb children down to compliance with the lowest common denominator of peers at school or parental control and compliance at home.

Normal children have become the victims of a poor diet, lack of nurturing, unhealthy lifestyle and an uncaring, controlling society

Tens of millions of children have suffered severe but reversible neurological damage due to the processed junk foods given by parents and schools, toxic drinks such as sodas containing aspartame, forced vaccines and other medications and toxic contamination from environmental sources.

These toxins attack the developing brain of the child in various ways, generally manifesting, if not in autism, as abnormal behavioral responses such as inability to concentrate, restlessness, fatigue, inability to learn, difficulty socializing and so on, none of which are the fault of the child. These children however are still given labels such as having a disorder in order to justify feeding them powerful amphetamine class drugs for the sole benefit of adults.

All of these symptoms can be fully resolved and the child restored to full physical and mental health with a natural balanced diet and lifestyle.

The consequences and dangers of feeding amphetamines to children

Amphetamine class drugs exhibit numerous health risks, including, but not limited to:

The only so-called “disorder” is not with children, but with a broken, controlling society and parents and teachers who lack compassion and responsibility, putting their own needs and an easy life before the health, well-being and future of children.

Children, for their part, as from the beginning of time, only require feeding with a healthy, balanced, nutritionally complete diet, nurturing, compassion, tolerance, respect, understanding, a stable home, capacity to achieve full potential and, above all, unconditional love.

About the author:  Adrian Cooper is the best-selling author of the highly acclaimed book Our Ultimate Reality, Life, the Universe and Destiny of Mankind. For 7 years he was also the author of a 7+ page weekly newsletter on Spiritual, Metaphysics, Quantum Mechanics and Natural Healing and Health related subjects, read by over one million people around the world.