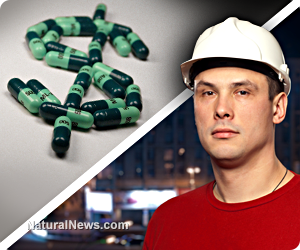 “You're not simply tired because you're out of sync with the sun, the fictional narrative says: you're tired because you have a disorder! And unless you pop these pills -- which might kill you -- you'll never be normal again.”

Ever heard of “shift work disorder?” It’s a new disease being played up by the pharmaceutical industry to sell drugs so dangerous that even the home page of the drug website admits the drug may kill you.

One such drug is called “Nuvigil,” sold by Cephalon, Inc., a wholly-owned subsidiary of Teva Pharmaceutical Industries Ltd. The warning text on the Nuvigil website says:

NUVIGIL (armodafinil) Tablets [C-IV] may cause serious side effects including a serious rash or a serious allergic reaction that may affect parts of your body such as your liver or blood cells, and may result in hospitalization and be life-threatening. If you develop a skin rash, hives, sores in your mouth, blisters, swelling, peeling, or yellowing of the skin or eyes, trouble swallowing or breathing, dark urine, or fever, stop taking NUVIGIL and call your doctor right away or get emergency help.

According to the Nuvigil website, the drug is, “a prescription medicine used to improve wakefulness in adults who experience excessive sleepiness due… shift work disorder (SWD)”

Yet another fictitious disease

SWD, of course, is a made-up “disease” now being propagandized for the sole purpose of selling drugs like Nuvigil. The pushing of fictitious disorders is generally known as “disease mongering” across the industry. The premise of so-called Shift Work Disorder is that the tiredness you feel when you stay up all night working a night shift is actually some sort of disease requiring chemical intervention.

You’re not simply tired because you’re out of sync with the sun, the fictional narrative says: you’re tired because you have a disorder! And unless you pop these pills — which might kill you — you’ll never be normal again!

This is the incessant lie of all drug advertisements: these pills will make you normal and healthy, they claim. Yet people who take their pills aren’t normal and healthy; they’re chronically diseased and suffering kidney failure, liver failure, skin disorders, sleep disorders and often dying from FDA-approved medications.

An incredible 783,000 Americans die each year from conventional medicine. Roughly 100,000 of those are killed by FDA-approved prescription medications. Yet the industry’s answer is to keep inventing more and more medications to add to the toxic burden patients are already experiencing from the half-dozen meds they’re already popping on a daily basis.

That’s the business model of Big Pharma, of course: invent a fake disease, promote the disease to push a new pill, then get as many people to take those pills as possible while government Medicaid and Medicare programs write the checks.

The patient, in essence, is just a proxy for profit. The patient’s body is essentially a chemical dumping ground so that drug companies can collect profits while claiming to have offered some sort of “treatment” that never actually treats anything other than symptoms.

“NUVIGIL may help the sleepiness caused by these conditions, but it may not stop all of your sleepiness and does not take the place of sleep,” says the Nuvigil website. In other words, you’d probably have similar results by slamming a couple of Monster energy drinks (not that I’m recommending energy drinks, of course).

But wait, there’s more: “NUVIGIL is a federally controlled substance (C-IV), so use NUVIGIL only as directed and keep in a safe place to prevent misuse and abuse. It is against the law to sell or give NUVIGIL to another person.”

Ah, and now we get to the real heart of the matter. Nuvigil is a highly addictive controlled substance.

“NUVIGIL is a federally controlled substance [C-IV] because it has the potential to be abused or lead to dependence,” says the Nuvigil website. “Selling or giving away NUVIGIL may harm others and is against the law.”

What they mean, of course, is that you selling Nuvigil to someone else is against the law, but it’s not against the law for the drug industry to conspire with your doctor to sell you the drug. Keep this in mind when you hear about front groups like the Partnership For A Drug-Free America. Nearly all these front groups are funded by Big Pharma, and their goal is to get drugs off the streets so that people have to buy those very same drugs via prescription. It’s a turf war, and Big Pharma wants to be your dealer.

By the way, the company that makes Nuvigil is running clinical trials now in an effort to get the pill approved for treating depression and “bi-polar disorder,” yet another fictitious disease invented by the psychiatric industry to sell more high-profit pharmaceuticals that harm people. If they get their way, you’ll soon be able to buy highly addictive, class IV controlled substances to treat your “bi-polarness.”