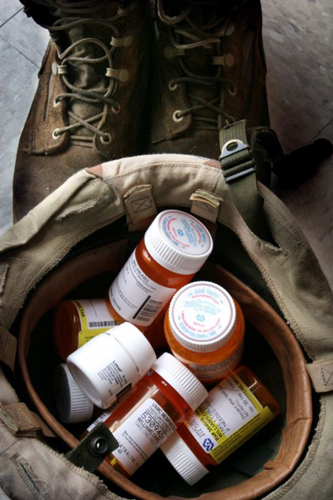 “Is it possible that the 'researchers' were unaware that the treatment of mental illness in the military is about pushing pills? Were they unaware that one-in-six military personnel were on some form of psychiatric drug and, all too often, are taking a 'cocktail' of mind-altering drugs?”

The latest “research” on the cause of the epidemic of military suicides is utter garbage and a complete insult to the men and women of our armed forces.

Ironically, the news being reported about the 11-page study is that it concluded that the ever-increasing number of military suicides (349 last year) is not due to having been in combat.

But this isn’t new information and one would have to have been living in a tuna can not to have known this, as this data has been publicly available for years.

The Defense Department (taxpayer) financed “research” included information from 150,000 soldiers between 2001-2008 and deduced that the military personnel who killed themselves were heavy drinkers or suffering from some alleged mental illness.

In fact, according to the report, “the most important finding was that mental health problems, including manic-depressive disorder, depression and alcohol-related problems, were significantly associated with an increase in the risk of suicide.”

Okay, this makes sense, especially when one considers the other important observation “researchers” provided that “studies have shown a marked increase in the incidence of diagnosed mental disorders in active-duty service members since 2005, paralleling the incidence of suicide.” 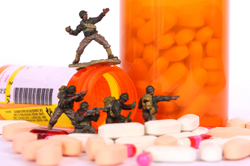 This is worth repeating. Since 2005, the increased rate of diagnosed mental illness parallels the incidence of suicide. Come on, anyone with at least one neuron still snapping would ask the next question… what psychiatric drugs were these military personnel prescribed?

Did the “researchers” even consider that the psychiatric drugs being prescribed to the newly diagnosed mentally ill soldiers might actually cause the suicidal behavior? No. And, worse, the words “drugs” or “medication” do not even appear in the report.

So the “objective” of the “research” was to “identify and quantify risk factors associated with suicide in current and former US military personnel…,” and these great medical minds didn’t find it important to add one more variable—mind-altering drugs—to the equation? This is either deliberate or just plain dumb.

Is it possible that the “researchers” were unaware that the treatment of mental illness in the military is about pushing pills? Were they unaware that one-in-six military personnel were on some form of psychiatric drug and, all too often, are taking a “cocktail” of mind-altering drugs? Were they unaware that prescriptions for Ritalin and Adderall written for active-duty personnel has increased 1,000% in the last five years, or that to date the Pentagon has spent more than a billion dollars on psychiatric mind-altering drugs?

Of course, had the “researchers” even remotely considered these important data, the next logical step would be to look at the adverse reactions associated with the psychiatric drugs prescribed. For instance, given that depression is mentioned as one of the identified “risks,” upon review, the “researchers” would find that the prescribed antidepressants carry the Food and Drug Administration’s, FDA, most serious Black Box warning that the drug may cause suicidal behavior and ideation.

This isn’t rocket science and these “researchers” are not stupid people. That psychiatric drugs were deliberately left out as a variable in this study only serves to reinforce the Department of Defense’s, DoD, complete disregard for the welfare of its troops.

Literally thousands of news articles have been written questioning the connection between the military suicides and increased number of psychiatric drugs being prescribed and “researchers,” using taxpayer funds, do not even consider it as a possible risk factor? Shameful.