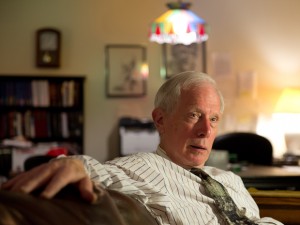 Edward Shorter, professor of the history of medicine at UofT, poses for a portrait in Toronto, Ontario. He is critical of the new DSM-V psychiatry manual.

“Unlike our definitions of ischemic heart disease, lymphoma, or AIDS, the diagnoses are based on a consensus about clusters of clinical symptoms, not any objective laboratory measure.”

Of all the scorn heaped on the new fifth edition of psychiatry’s manual, perhaps the most biting appeared last week in the London Review of Books, in the words of Ian Hacking, a leading Canadian philosopher who held a chair at the Collège de France.

He is not alone in this view, which he describes as “grounded more on logic than on medicine.”

For example, when when director Thomas Insel recently announced the U.S. National Institute of Mental Health will henceforth ignore all the DSM’s diagnoses in deciding how to fund research, he bluntly declared that the book’s “weakness is its lack of validity.”These were fighting words. 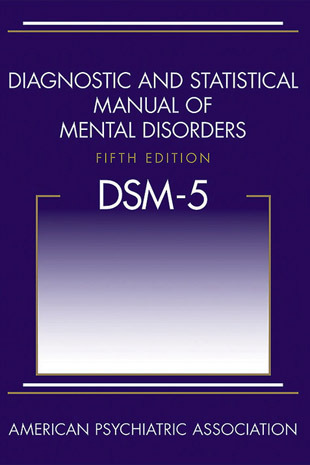 “Unlike our definitions of ischemic heart disease, lymphoma, or AIDS, the diagnoses are based on a consensus about clusters of clinical symptoms, not any objective laboratory measure,” he wrote. “In the rest of medicine, this would be equivalent to creating diagnostic systems based on the nature of chest pain or the quality of fever.”

This complaint, that psychiatrists confuse their measurements with reality and allow words to coerce reason, is technically known as “reification,” Latin for “thing-ification.” It has a rich history. For psychiatrists, it has shown itself in such historical goofs as “drapetomania,” a diagnosis for slaves who fled kind masters, and the “schizophrenigenic mother,” whose coldly smothering love drove her children crazy.

Born of psychology’s aspiration to objective medical science, this awkward habit of reification is again at play in the controversy over changes to the DSM, known scornfully as psychiatry’s “Bible.” Only this time, it is not racism or sexism driving the trend, but numbers.

“Psychiatry has become very quantitative. If you pick up an issue of the American Journal of Psychiatry, it’s just a sea of numbers,” said Edward Shorter, historian of medicine and clinical scientist at the University of Toronto. “It’s not a pose. They are sincere in their belief that you can eke out real differences between disease entities by studying them quantitatively.”

As with religion, however, literalism has been a constant theme of psychology since it split from philosophy in the 19th century. Even its target, the mind, is not seen as a real thing itself, but a metaphor for the doings of the brain.

So the effort to pin numbers on the mind as if taking the temperature of water or the weight of a stone — as the DSM does with its checklists of symptoms — has always been a risky project. It does not always work. 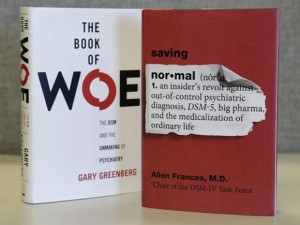 The Book of Woe by Gary Greenberg and Saving Normal by Allen Francis on display in Chicago. Recent criticism of changes in an update of psychiatry’s most widely used guidebook for diagnosing mental illness include these books by two respected therapists.

Social psychology has been particularly wounded, shot in the foot really, by studies that claimed objective truth based on contrived, unreplicated, misinterpreted, and occasionally fraudulent experiments on human guinea pigs. Often these are simply academic scandals. But the stigma created by the common belief that the DSM is an authoritarian drug delivery manual that unfairly labels ever more unusual people with each edition has put the philosophical fallacy of reification on the public policy agenda.

The concept of disease is a tricky one for psychiatry. For crassly political reasons that originated in conflict between Freudian psychoanalysis and biological psychiatry, the DSM aims to be “agnostic with regard to causation [of mental illness],” said Prof. Shorter. This was a fiction, but it let the DSM’s early authors discard the fairy tales of psychoanalysis, while simultaneously delivering their discipline “into the hands of the pharmaceutical companies,” he said.

“This is the Achilles Heel of the whole DSM system, these operational criteria, because they don’t give you a clear overview of what the thing is,” Prof. Shorter said. “What psychiatry has problems with now is with verification of the diseases it has proposed. Do these really exist in nature or not? And this has been a very vexatious stumbling block indeed.”

As Gary Greenberg criticizes in his new book about the DSM, The Book Of Woe, many psychiatrists see reification of diagnoses as either literally true, or “a wobbly step on the way to truth.” Like lawyers and the law, they also see the DSM as a “living document,” whose criteria “are intended to be scientific hypotheses, rather than inerrant Bible scripture.”

The right balance between hypothesis and scripture is not always struck, however, and the new DSM has been criticized, for example, for dropping the bereavement exclusion for depression, which seems to make a disease of normal grief, and grease the wheels of drug delivery.

As it seeks to outgrow the squishy self-absorption of psychoanalysis, modern psychiatry has grasped at medical objectivity, and missed. To today’s budding shrink, the analyst’s couch looks like a horse and buggy, but the diagnoses of the DSM look like stigmatizing fictions. It is an awkward predicament, but sometimes funny.