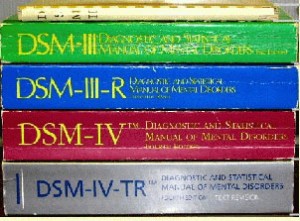 Scientific American, By John Horgan
May 4, 2013

Now, in a move sure to rock psychiatry, psychology and other fields that address mental illness, the director of the National Institutes of Mental Health has announced that the federal agency–which provides grants for research on mental illness–will be “re-orienting its research away from DSM categories.” Thomas Insel’s statement comes just weeks before the scheduled publication of the DSM-V, the fifth edition of the Diagnostic and Statistical Manual. Insel writes:

“While DSM has been described as a ‘Bible’ for the field, it is, at best, a dictionary, creating a set of labels and defining each. The strength of each of the editions of DSM has been ‘reliability’–each edition has ensured that clinicians use the same terms in the same ways. The weakness is its lack of validity. Unlike our definitions of ischemic heart disease, lymphoma, or AIDS, the DSM diagnoses are based on a consensus about clusters of clinical symptoms, not any objective laboratory measure. In the rest of medicine, this would be equivalent to creating diagnostic systems based on the nature of chest pain or the quality of fever. Indeed, symptom-based diagnosis, once common in other areas of medicine, has been largely replaced in the past half century as we have understood that symptoms alone rarely indicate the best choice of treatment. Patients with mental disorders deserve better.”

Insel said that the NIMH will be replacing the DSM with the “Research Domain Criteria (RDoC),” which define mental disorders based not just on vague symptomology but on more specific genetic, neural and cognitive data. But then, immediately after making this dramatic announcement, Insel added that “we cannot design a system based on biomarkers or cognitive performance because we lack the data.”

Hunh? So the NIMH is replacing the DSM definitions of mental disorders, which virtually everyone agrees are profoundly flawed, with definitions that even he admits don’t exist yet! What more evidence do we need that modern psychiatry is in a profound state of crisis?

Ironically, some pharmaceutical companies that have enriched themselves by selling psychiatric drugs are now cutting back on further research on mental illness. The “withdrawal” of drug companies from psychiatry, Steven Hyman, a psychiatrist and neuroscientist at Harvard and former NIMH director, wrote last month, “reflects a widely shared view that the underlying science remains immature and that therapeutic development in psychiatry is simply too difficult and too risky.” Funny how this view isn’t incorporated into ads for antidepressants and antipsychotics.

NIMH director Insel doesn’t mention it, but I bet his DSM decision is related to the big new Brain Initiative, to which Obama has pledged $100 million next year. Insel, I suspect, is hoping to form an alliance with neuroscience, which now seems to have more political clout than psychiatry. But as I pointed out in posts here and here on the Brain Initiative, neuroscience still lacks an overarching paradigm; it resembles genetics before the discovery of the double helix.

Since I became a science writer 30 years ago, I have heard countless claims about breakthroughs in our understanding and treatment of mental illness. And yet as the NIMH decision on the DSM indicates, the science of mental illness is still appallingly primitive. Instead of forming fancy new programs and initiatives and alliances, leaders in mental health should perhaps do some humble, honest soul searching before they decide how to proceed. And they should think of what’s best not for their professions or the pharmaceutical industry but for those suffering from mental illness, who deserve better.