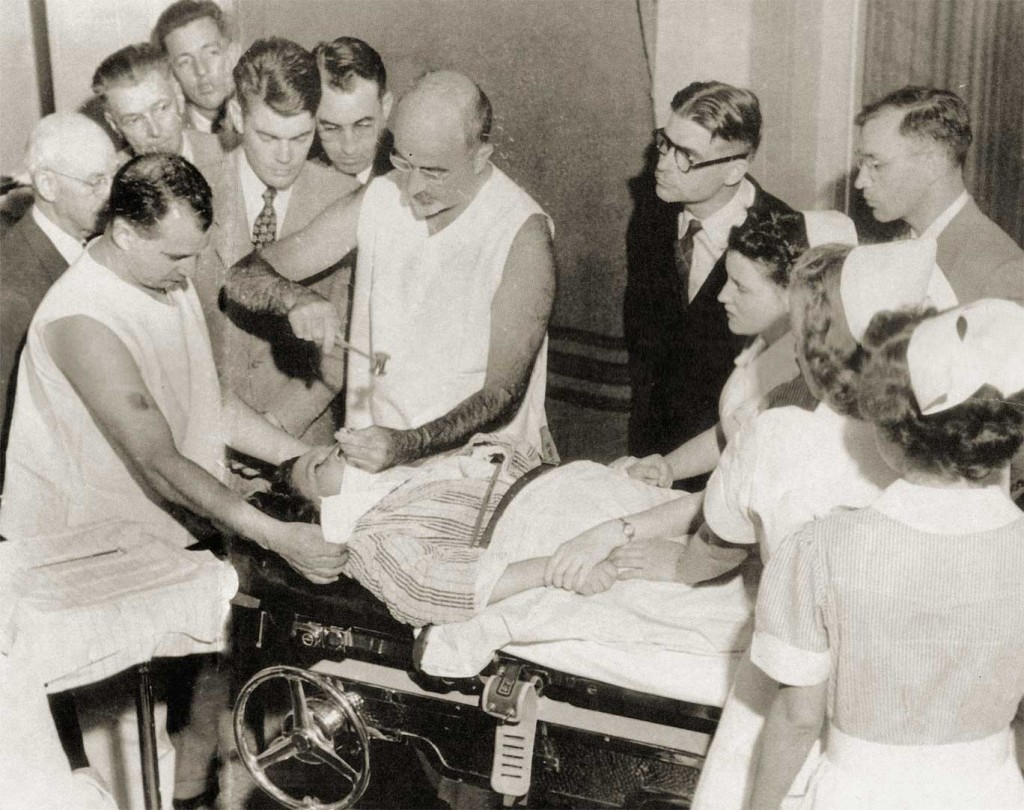 “These days, psychiatry has given up the ice pick in favor of scalpels, electrodes and chemical intervention. Of course, their actions are still not considered criminal.”

Modern psychiatrists stand on the shoulders of the mobile lobotomist, Dr. Walter Freeman (1895 – 1972). Good ole Dr. Walt pioneered the lobotomy, relieving thousands from what he called “the burden of consciousness.”

My radio show guest for March 13, 2013, is psychiatrist Peter Breggin, MD, who battled Dr. Freeman in court. Dr. Freeman passed away before the case was settled. Listen to the amazing history of modern psychiatry on this episode of Mental Health Exposed.

Dr. Freeman’s weapon of choice was an ice pick, which he hammered into the eye socket of his patients. Once the ice pick hit home, he would slash it back and forth, destroying the tissue of consciousness or frontal lobe. Many of his victims were children.

Better yet, if you couldn’t get to the brain-scrambling doc, no worries. He was mobile. Dr. Freeman traveled the country in his recreational vehicle, dubbed the “loboto-mobile,” demonstrating his methods and spreading psychiatry’s good news to his colleagues.

The doctor did the stabbing and scrambling without anesthesia. Rather, he used electroshock to induce a seizure before going in for the brain kill. Dr. Freeman did his deed on children as young as 12 years of age, and also managed to kill at least one housewife.

Of course, anyone else who went around stabbing innocent people in the eye and destroying their brains would be charged with criminal assault and put into prison for life.

Dr. Freeman performed 3500 assaults without as much as a slap on the wrist. In fact, he is recognized as a pioneer and major contributor to the field of psychiatry.

Eventually, the massive overuse of the ice pick lobotomy drew “concern” and even criticism from some. So, the practice was ended after only a few thousand people were maimed. Who else but a psychiatrist can go on such a massive crime spree, destroying thousands of lives – one by one – and only draw concern?

These days, psychiatry has given up the ice pick in favor of scalpels, electrodes and chemical intervention. Of course, their actions are still not considered criminal.

Do you think I am overreacting?

Would you turn your child or a loved one over to Dr. Freeman?  Have you researched modern psychiatry’s current psychosurgeries?  Peter Breggin’s work is a good one to start learning about what is going on. You can listen to him on Mental Health Exposed, March 13, 2013 episode!