Dollars for Docs Mints a Millionaire 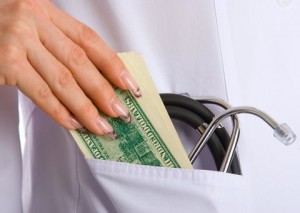 Half of the top earners are from a single specialty: psychiatry.

But the Nashville psychiatrist is also notable for a professional pursuit: During the last four years, the 47-year-old Draud has earned more than $1 million for delivering promotional talks and consulting for seven drug companies.

By a wide margin, Draud’s earnings make him the best-paid speaker in ProPublica’s Dollars for Docs database, which has been updated to include more than $2 billion in payments from 15 drugmakers for promotional speaking, research, consulting, travel, meals and related expenses from 2009 to 2012.

Payouts to hundreds of thousands physicians are now included.

Draud is not the only high earner: 21 other doctors have made more than $500,000 since 2009 giving talks and consulting for drugmakers, the database shows. And half of the top earners are from a single specialty: psychiatry.

“It boggles my mind,” said Dr. James H. Scully Jr., chief executive of the American Psychiatric Association (APA)P, referring to the big money paid to some psychiatrists for what are billed as educational talks.

Paid speaking “is perfectly legal, and if people want to work for drug companies, this is America,” said Scully, whose specialty has often been criticized for its over-reliance on medications. “But everybody needs to be clear — this is marketing.”

When Dollars for Docs launched in 2010, it gave the first comprehensive look at the money that drug companies spend to enlist doctors as a sales force. The new data show how payouts to psychiatrists like Draud and other doctors have added up over time. And they underscore the key role physicians play for drugmaker profits even as scrutiny and criticism of such payments grows.