by  Martha Rosenberg and Evelyn Pringle 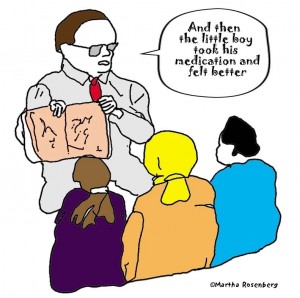 No drug ads or Pharma sponsors dot the website of the Child & Adolescent Bipolar Foundation which has renamed itself the Zen-like “Balanced Mind Foundation.” (Meditation/medication–same idea, right?) Instead, visitors to the site will find slick slide shows, tales of children saved by bipolar drugs and a list of donor families. But according to the Journal of the American Academy of Child and Adolescent Psychiatry the actual guidelines the Balanced Mind Foundation uses to discern bipolar disorder in children and adolescents were funded by Abbott, AstraZeneca, Eli Lilly, Forest, Janssen, Novartis and Pfizer. Oops.

The American Academy of Child and Adolescent Psychiatry, the group that produces the journal, is also viewed as a possible  Pharma front organization.  Its journal is where Paxil’s “study 329,” which buried the suicide risks of the antidepressant in adolescents leading to wide use, appeared. Court proceedings brought by the New York Attorney General in 2004 revealed the research was not even written by the 22 doctors and researchers listed but by the marketing firm of GlaxoSmithKline who makes Paxil, Scientific Therapeutics Information. What?

“You did a superb job with this,” wrote the paper’s first so-called author, Brown University’s Martin Keller to Scientific Therapeutics Information’s ghostwriter Sally Laden. “It is excellent. Enclosed are rather minor changes from me.”

Authors of the Journal of the American Academy of Child and Adolescent Psychiatry’s influential 2007 drug guidelines for very young children–“this will sometimes involve the use of medications,” they presell–also had Pharma ties. Financial links were disclosed to Abbott, AstraZeneca, Boehringer-Ingelheim, Bristol-Myers Squibb, Cephalon, Eli Lilly, Forest Labs, GlaxoSmithKline (GSK), several divisions of Johnson & Johnson, and ten other drug companies. In 2012 alone the Academy received $221,000 from Eli Lilly for research, an “outreach program” and a conference reception.

Another group widely viewed as a Pharma front is the American Foundation for Suicide Prevention, dedicated to stamping out suicide caused by deficiencies of the drugs it promotes. Suicide prevention is a knee-jerk marketing tool for Pharma even though suicides are rising, not falling, despite the 400 percent increase in its heavily promoted antidepressants; it now accounts for 36,000 deaths a year. Hello?

The American Foundation for Suicide Prevention received $100,000 from Eli Lilly in 2011 and $50,000 in 2012 and was led for a time by psychiatrist Charles Nemeroff who left Emory University in disgrace after Congress found he failed to disclose at least $1.2 million in Pharma income to Emory.

In fact, the prevention group is well funded enough, it makes its own donations, Pharma fashion. It gave between $10,000 and $24,000 to the University of Illinois at Chicago  College of Medicine, along with Paxil-maker GSK, according to the spring 2008 UIC Medicine magazine.

Another iffy group is the National Council for Community Behavioral Healthcare, described as “a non-profit association representing 1,300 mental health and addictions treatment and rehabilitation organizations,” on its website but taking at least a half a million dollars in Pharma grants.  In 2010, the Council received   $190,000, from Eli Lilly and $500,000 from AstraZeneca. Nice non-profit work if you can get it. The previous year the group received funding from AstaZeneca and Bristol-Myers Squibb, according to its magazine.

No wonder the Council pushes Mental Illness Awareness Week, Suicide Prevention and the lucrative idea that addiction is “a treatable chronic medical condition, similar to diabetes or heart disease,” in its National Council magazine. Ka-ching.

Finally, there is the three-year-old American Professional Society of ADHD and Related Disorders (APSARD), the first international organization based in the U.S. to focus exclusively on ADHD. “APSARD will offer a range of services including a comprehensive website, an annual scientific meeting, a quarterly peer-reviewed journal, and the development of guidelines that address diagnosis, assessment and treatment of ADHD across the lifespan,” promises its first press release without mentioning that Eli Lilly will fund its newsletters* and 2010 conference. Oops.

In addition to Pharma, psychiatrists are also raking in money from expensive drugs that adults and children may not even need. A psychiatrist working eight hours a day doing talk therapy “earns approximately $940 a day, $4,700 a week and $225,000 per year,” notes an article called, “The Industrialized, New-Deal Age of Psychiatry,” by psychiatrist Ronald Ricker. That is “chump change” compared with 15-minute, once-a-month med checks that net from $85 to $100 dollars, says Ricker. By seeing 38 to 42 patients each day at $100 a visit plus extra fees averaging $30 per appointment, a psychiatrist can make “roughly $104,000 a month, and $1,248,000 per year,” he computes. The pill bonanza is abetted by the phony disease and patient  groups Pharma funds. END

Evelyn Pringle is an investigative journalist and a pharmaceutical researcher.

Martha Rosenberg is an investigative health reporter and the author of Born With a Junk Food Deficiency: How Flaks, Quacks and Hacks Pimp The Public Health (Prometheus Books).