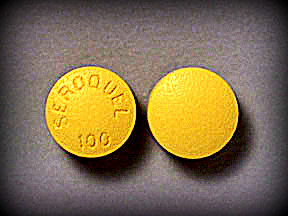 Has the motion picture industry become the newest outlet for pharmaceutical product advertising? And as part of that promotion will the viewing audience understand that Seroquel, one of the most powerful mind-altering drugs in psychiatry’s arsenal, has been dubbed the pharmaceutical equivalent of a chemical lobotomy?

The recently released Silver Linings Playbook, for example, in an apparent attempt to legitimize the alleged mental illness bipolar disorder as a medical condition, and also convince the audience that psychiatric medication is the necessary treatment, not only specifically mentions Seroquel but also provides a close up of the actual pill, right before the lead character decides to take it.

While the brief shot of the antipsychotic, Seroquel, is almost subliminal, the fact that the pill is given a close up, clearly revealing the name of the drug, is unmistakably purposeful. In the context of this film, the intent of the shot, of course, is to reinforce that the antipsychotic drug will “treat” the alleged mental disorder and the main character will be “better.”

The problem with being seen as promoting specific psychiatric drugs like Seroquel is that the information about a particular drug is cherry-picked and, depending on the films intended message, important life and death information is withheld.

While all of the psychiatric mind-altering drugs mentioned in the film, such as Lithium, Abilify, Xanax, Effexor, Klonopin and Trazodone carry serious adverse effects, the antipsychotic Seroquel is of particular interest due to the utterly devastating adverse reactions that now are associated with it. And it is these important facts that make up the back-story, but did not make the final cut. 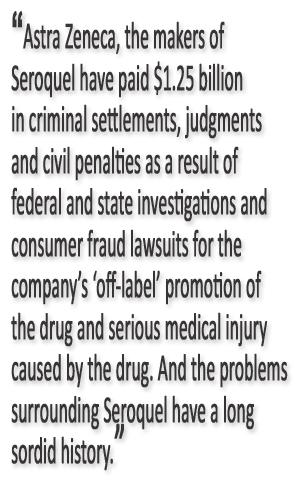 For example, Astra Zeneca, the makers of Seroquel have paid $1.25 billion in criminal settlements, judgments and civil penalties as a result of federal and state investigations and consumer fraud lawsuits for the company’s “off-label” promotion of the drug and serious medical injury caused by the drug.  And the problems surrounding Seroquel have a long sordid history.

Between 1997 and 2012, the Food and Drug Administration, FDA, received nearly 50,000 Adverse Event Reports, AER’s, regarding Seroquel, with 30,000 of them identifying the drug as the primary suspect causing the event. During the same time period, the FDA AER’s reveal that 5,974 or 12% of the events ended in death and 2,583 or 9% of the deaths targeted Seroquel as the primary suspect. While these numbers should be of concern to anyone considering taking the drug, the FDA further acknowledges that the AER’s represent only 1 to 10 percent of the actual adverse events.

However, as evidenced by the positive portrayal of the drug in the movie, this important consumer information was left on the cutting room floor. The audience does not get the benefit of knowing if the main character was warned by his psychiatrist about the possible serious side effects, or whether, after taking Seroquel, he, like tens of thousands others in the real world, experienced any of the above adverse side effects or brain shrinkage. This is the danger of promoting psychiatric drugs through film.

Unlike pharmaceutical advertising through print or television, drug warnings and adverse event information is not yet required for film. Certainly one may call it artistic license, but the power of film should not be understated when dealing with controversial mental health issues and seriously dangerous psychiatric mind-altering drugs. 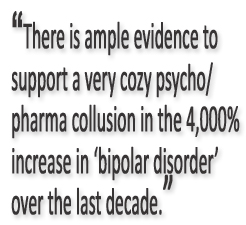 Furthermore, the audience does not get the benefit of knowing that diagnosing of the alleged childhood bipolar disorder has increased 4,000 percent in just a 10 year time span, nor are they informed that four times as many children covered by Medicaid (government funded) receive antipsychotics, compared to children whose parents have private insurance.

Additionally, the audience is not made aware of the financial relationships between psychiatrists, who conduct drug studies, and the pharmaceutical industry.  A 4,000 percent increase in a psychiatric diagnosis like bipolar disorder does not happen by accident and there is ample evidence to support a very cozy psycho/pharma collusion.

Take for instance Joseph Biederman, M.D., a Harvard University professor, a leading child psychiatrist and the most prominent advocate of the alleged childhood bipolar disorder. Biederman was a key witness in a multi-state lawsuit where, among other things, more than 2,000 patients claimed to have been harmed by the prescribed antipsychotics. Biederman and two colleagues were found to have violated conflict of interest policies at Harvard Medical School and Massachusetts General Hospital.

Between 2000 and 2007, Biederman received $1.6 million dollars from pharmaceutical companies, yet had only reported earning $200,000. But it is Biederman’s “research” that really is at issue. While Biederman was pushing the prescribing of antipsychotics to “treat” the alleged childhood bipolar disorder, he also was receiving payments from the pharmaceutical companies that market the antipsychotic “treatments.”

A decade ago bipolar was relatively non-existent but, thanks to Biederman’s advocating its use to even children under the age of six, the scientifically unverifiable bipolar disorder has gone mainstream with more than three million prescriptions written for Americans in 2011 alone – a hefty $18 billion profit for the pharmaceutical companies.

Because Biederman was paid by pharmaceutical companies to cheerlead the use of their antipsychotic drugs at the same time he is promoting the bipolar diagnosis, it makes his “research” utterly invalid. But none of this information makes it to the silver screen and the myth of bipolar disorder and antipsychotic drug “treatment” is neatly packaged as a love story. Unfortunately the real world isn’t so neat and for an ever-increasing number of people, their real-life screenplays read more like mental health horror stories.

But happy endings sell tickets so Silver Linings Playbook  skips the real-life Seroquel horror stories happening all around us and replaces them with a Hollywood happy ending.   As we approach the final scenes of the film,  the lead character credits his recovery to taking the drug saying “I have a positive attitude. I’m on medication, I’m in therapy.”

You just can’t buy this kind of advertising…or can you? If advocating psychiatric drug use through film becomes a new form of advertising for the pharmaceutical industry, one has to ask if it isn’t time to add a new code to the motion picture rating system…something along the lines of “PD” for “Strong Prescription Drug Content.”