By SOP newswire – November 19, 2012
Dr. Niall (Jock) McLaren is an Australian psychiatrist who uses philosophical analysis to show that modern psychiatry has no scientific basis. This startling conclusion dovetails neatly with the growing evidence that psychiatric drug treatment is crude and damaging. Needless to say, this message is not popular with mainstream psychiatrists. However, in this book, he shows how the principles of information processing give a formal theory of mind that generates a model of mental disorder as a psychological phenomenon.

The Mind-Body Problem Explained: The Biocognitive Model for Psychiatry by Dr. Niall McLaren

Inside the The Mind Body Problem Explained, readers learn:

How, for ideological reasons, modern philosophy misses the point of the duality of mind and body;

What experts are saying about the book: 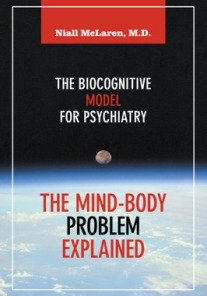 “The Mind Body Problem Explained is a thoughtful, insightful and provocative exploration of the nature of the human mind, and sets forth a powerful argument for rethinking the medical model of mental disorders. The current paradigm of psychiatric care has failed us, and Niall McLaren`s book will stir readers to think of new possibilities.”

–Robert B. Whitaker, author Mad in America: Bad Science, Bad Medicine, and the Enduring Mistreatment of the Mentally Ill

“It is impossible to do justice to this ambitious, erudite, and intrepid attempt to dictate to psychiatry a new, `scientifically-correct` model theory. The author offers a devastating critique of the shortcomings and pretensions of psychiatry, not least its all-pervasive, jargon-camouflaged nescience.”

Read an excerpt from The Mind Body Problem Explained online at http://bozemannewsonline.com/the-nexus-between-brain-and-mind/.

Born in Western Australia, Niall (Jock) McLaren studied medicine at the University of WA and then psychiatry, graduating in 1977. He has been in full-time practice ever since, including five years in a Veterans` hospital and six years as the Regional Psychiatrist in WA`s remote Kimberley Region, before he moved to Darwin. McLaren writes papers and books with a philosophical bent which are uniformly loathed and ignored by the mainstream of psychiatry. Among his previous publishing credits are books in the Humanizing series: Humanizing Madness, Humanizing Psychiatry, and Humanizing Psychiatrists. Visit his website http://niallmclaren.com/ to learn more about his work and publications.