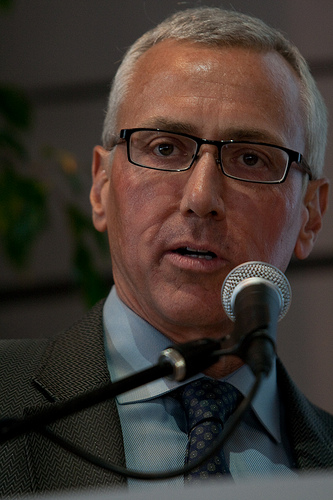 Part of the case made by U.S. prosecutors that led to GlaxoSmithKline’s $3 billion settlement today is that the company used a network of paid experts, speaking to doctors and to the press, to promote uses of its drugs that had not been approved by the Food and Drug Administration. According to the Department of Justice’s complaint, one of those paid experts was celebrity physician Dr. Drew Pinsky, then the host of the radio show Loveline, which was also being broadcast on MTV. Pinsky has gone on to host Celebrity Rehab, Dr. Drew on HLN, and Dr. Drew’s Lifechangers on the CW.

The government alleges that Pinsky was paid a total of $275,000 over just two months – March and April 1999 – to deliver messages about Wellbutrin SR, a Glaxo antidepressant, “in settings where it did not appear that Dr. Pinsky was speaking for GSK.”

As an exhibit to the complaint, the prosecutors  include invoices from Cooney Waters, a public relations firm, to GlaxoSmithKline for Pinsky’s services as a spokesperson. They also include a transcript of Pinsky’s appearance on David Essel – Alive!, another national radio program. As part of the $3 billion settlement announced today, Glaxo agreed to pay $727 million in criminal fines for its marketing of Wellbutrin SR and Paxil, another antidepressant.

One difference between Glaxo’s Wellbutrin SR and other antidepressants is that it may not decrease libido and may actually boost sex drive. (The drug’s package insert lists both “decreased libido” and “increased libido” as potential side effects.) Most common antidepressants, like Eli Lilly’s Prozac, Pfizer’s Zoloft, and Glaxo’s own Paxil, all of which are known as selective serotonin reuptake inhibitors (SSRIs), tend decrease sex drive. But Glaxo had no FDA approval for promoting Wellbutrin as having fewer sexual side effects. So it allegedly paid speakers, like Pinksy, who spoke about how, in his clinical practice, he used Wellbutrin SR in patients who suffered low sex drive on other drugs.

According to the transcript, the Essel show began with a clip from a woman who said she had 60 orgasms in a row, “just nonstop.” When asked if this was even possible, Pinsky replied, “Oh yeah. For some women. What I think she was amazed about was it just suddenly started and that kind of thing most typically happens from medication, frankly.” He then segues into saying that that is what he is on the show to talk about. Soon he’s talking about how Wellbutrin (he also mentions the generic name, bupropion) is the medicine he’s had the most experience with in his practice when it comes to avoiding the sexual side effects of antidepressants. “It actually is the one we advocate, one of the things we suggest people do if they’re getting a decrease in their libido or decrease in their arousal which typically occurs in the serotonin re-uptake inhibitor medication.” 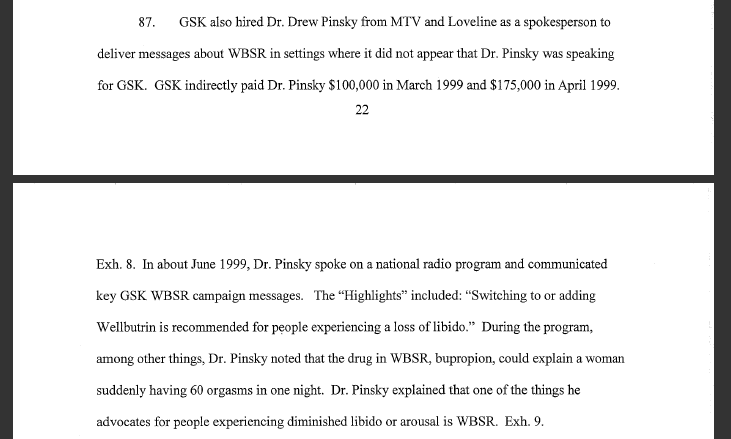 The section of the government's complaint that details Glaxo's relationship with Dr. Drew. (Click to enlarge)

A note from the PR firm accompanying the transcript says: “During the fifteen-minute segment, Dr. Pinsky communicated key campaign messages.” The spot is almost a textbook for the way drug companies have used speakers to promote medicines. Everything Pinksy says is reasonable – anecdotally, Wellbutrin does seem to have few sexual side effects. But Pinsky’s comments has the effect of giving air time to a use of a medicine that Glaxo was not supposed to promote.

Dr. Drew wasn’t alone. He’s one of a long list of experts listed in the complaint that the government says were paid by Glaxo as part of its promotional efforts. Requests for comment were sent to a manager for Pinsky, a publicist who had represented him, and through his HLN web site, but were not immediately returned.

A transcript of Dr. Drew’s appearance on a radio show

Other documents included in the DOJ’s complaint