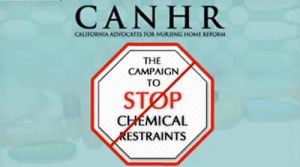 The above Stop sign is from California Advocates for Nursing Home Reform’s campaign to stop the abuse of chemical restraints.

New America Media – March 5, 2012
In a nursing home on the southern end of California’s Central Valley, three elderly dementia patients died during 2007. Normally, that would not make the headlines. But these patients died after being given powerful antipsychotic drugs to control their behavior–despite warnings the drugs increase the risk of death in elders with dementia.

Mae Brinkley, 91, Joseph Shepter, 76, and Alexander Zaiko, 85, died at the Kern Valley Hospital, a 74-bed skilled nursing facility in rural Lake Isabella, about 30 miles northeast of Bakersfield. Their cases came to light after a long-term care ombudsman reported to the state Department of Public Health that a patient had been held down and forcibly injected with an antipsychotic medication.

Investigators later found the nursing facility had given 22 patients, some with Alzheimer’s disease–the most common form of dementia–high doses of antipsychotic medications to control them for the convenience of staff, according to court papers and the Center for Medicare Advocacy.

The case, set for trial this spring, is California’s first use of criminal elder abuse law in this context. But across the country the use of drugs as chemical straight jackets in nursing homes and hospitals is a growing problem.

“There are dozens of Kern Valley Hospitals that drug with impunity,” said Tony Chicotel, an attorney with the California Advocates for Nursing Home Reform (CAHNR). The organization’s December report titled, “In a Stupor,” by alleged the “misuse of antipsychotic drugs is the leading form of elder abuse in nursing homes.”

The rising concerns of the abuse of medications in nursing homes comes as the psychiatric profession reviews its definitions of mental illness. The Diagnostic and Statistical Manual of Mental Illness guides mental health professionals in identifying nearly 300 different mental disorders. Its fifth edition, DSM-5, is due out next year.

As it stands now, the new guidelines could classify millions of elders as mentally ill for such conditions as bereavement and “mild cognitive disorder,” a heightened level of forgetfulness that many psychiatrists see as a possible precursor to dementia.

The manual doesn’t prescribe treatments; that’s left to individual doctors. But there are only 2,000 board-certified geriatric psychiatrists in the United States, according to Dilip Jeste, MD, president-elect of the American Psychiatric Association and chief of geriatric psychiatry at the University of California, San Diego.

That means treatment of elders often falls to family doctors or the professional staff in hospitals, nursing homes and assisted living facilities, who may have little training in the special needs of older adults.

Of the nearly 305,000 elderly nursing home residents nationally, about 14 percent received antipsychotic drugs in only the first six months of 2007, at a cost of hundreds of millions of dollars, according to Toby S. Edelman, senior policy attorney for the Center for Medicare Advocacy.

Edelman told a congressional hearing last November that 83 percent of Medicare claims for use of the drugs on the elderly were for off-label conditions, meaning the drugs were used in unintended ways. A startling 88 percent were conditions specifically cited as dangerous by the Food and Drug Administration (FDA), according to a government study