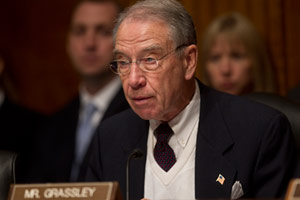 The request is a follow-up to a 2010 letter Grassley sent all states that requested statistics on top prescribers of these drugs.

“These types of drugs have addictive properties, and the potential for fraud and abuse by prescribers and patients is extremely high,” Grassley wrote in Monday’s letters. “When these drugs are prescribed to Medicaid patients, it is the American people who pay the price for over-prescription, abuse, and fraud.”

ProPublica reported in November that Florida allowed at least three physicians to keep treating and prescribing drugs to the poor amid clear signs of possible misconduct. One doctor kept prescribing narcotic pain pills to Medicaid patients for more than a year after he was arrested and charged in 2010 with trafficking in them.

A number of the top-prescribing Medicaid doctors around the country are listed in our Dollars for Docs database of payments made by 12 pharmaceutical companies to physicians for speaking and consulting Medicaid, jointly funded by the states and federal government, provides health care coverage to about 60 million low-income enrollees.

Grassley, the senior Republican on the Senate Judiciary Committee, has long argued for greater transparency in health care. The painkillers and mental health drugs Grassley is inquiring about are among the top drivers of Medicaid drug spending.

His letter to Ohio notes that the top prescriber of the anti-psychotic Abilify wrote 13,825 prescriptions in 2009 — about 54 prescriptions per weekday. Ohio paid $6.7 million for that those prescriptions, state officials reported to Grassley.

The biggest prescriber of another anti-psychotic, Seroquel, wrote 18,890 scripts at a cost of $5.7 million. Grassley wrote the tally would amount to nine prescriptions per hour. When Ohio submitted the data to Grassley last year, it did not identify the doctors by name or license number.

“After an extensive review of prescribing habits of the serial prescribers of pain and mental-health drugs in Ohio, I have concerns about the oversight and enforcement of Medicaid abuse in your state,” he wrote. “While I am sensitive to the concerns of misinterpretation of the data you provided, the numbers themselves are quite shocking.”

Calls to officials in Ohio and Maine have not been returned.

In his letters to the 34 states, Grassley asked that officials tell him by Feb. 13 what action, if any, they have taken against top prescribers, whether those doctors are still eligible to bill Medicaid, whether any of the doctors were referred to their state medical boards for investigation, and what systems have been set up to track possibly excessive prescribing, among others.

Grassley is sending letters to 12 other states that never provided him data, as requested, on their top Medicaid prescribers. Four other states will not receive follow-up letters because the senator felt their initial responses to his 2010 letter were adequate.

ProPublica reported in November that since Grassley’s initial letter requesting the data in 2010, Louisiana, Arizona, Oklahoma and New York have kicked some high-prescribing physicians out of Medicaid. California has temporarily suspended or placed restrictions on 15 to 20 doctors in the past two years for prescribing disproportionately high volumes of painkillers and antipsychotics to Medicaid patients.

But Grassley said more needs to be done.

“When a doctor writes more prescriptions than seems humanly possible, it makes sense to ask questions,” he said in a statement to ProPublica. The statement noted that some states never responded to his original letter in 2010.