Print Save to bookmarks
JIM SALTER
From Associated Press 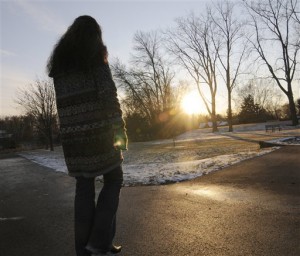 In this Thursday, Dec. 1, 2011, photo Lisa Nasseff walks through a park near St. Paul, Minn. Nasseff, 31, is suing a suburban St. Louis treatment center where she spent 15 months being treated for anorexia, claiming one of its psychologists implanted false memories during hypnosis sessions in order to keep her there long-term and run up a bill that eventually reached $650,000. (AP Photo - Jim Mone)

The memories that came flooding back were so horrific that Lisa Nasseff says she tried to kill herself: she had been raped several times, had multiple personalities and took part in satanic rituals involving unthinkable acts. She says she only got better when she realized they weren’t real.

Nasseff, 31, is suing a suburban St. Louis treatment center where she spent 15 months being treated for anorexia, claiming one of its psychologists implanted the false memories during hypnosis sessions in order to keep her there long-term and run up a bill that eventually reached $650,000. The claims seem unbelievable, but her lawyer, Kenneth Vuylsteke, says other patients have come forward to say they, too, were brainwashed and are considering suing. “This is an incredible nightmare,” Vuylsteke said.

Castlewood Treatment Center’s director, Nancy Albus, and the psychologist, Mark Schwartz, deny the allegations, and Albus pledged to vigorously fight the lawsuit, which was filed Nov. 21 and seeks the repayment of medical expenses and punitive damages. As in other repressed memory cases, which typically involve allegations of child abuse, the outcome will likely hinge on the testimony of experts with starkly different views on how memory works.

Nasseff stayed at Castlewood from July 2007 through March 2008 and returned for seven months in 2009. She was struggling with anorexia.

In her lawsuit, Nasseff claims that Schwartz used hypnotic therapy on her while she was being treated with psychotropic drugs, and her lawyer says Schwartz gave her books about satanic worship to further reinforce the false memories. She says she was led to believe she was involved in a satanic cult whose rituals included eating babies, that she had been sexually abused and raped multiple times, and that she had exhibited 20 different personalities.

Vuylsteke said the trauma was too much to bear, and that Nasseff tried to get hold of drugs to kill herself while she was at the center.

“Can you imagine how you would feel if you thought you had participated in all these horrible things?” Vuylsteke asked.

Eventually, Nasseff learned from other women treated at Castlewood that they, too, had been convinced through therapy that they were involved in satanic cults, Vuylsteke said.

Nasseff returned to her home in Minnesota, where she works part-time in public relations and has her eating disorder in check, her lawyer said.

In her lawsuit, she claims that Schwartz warned her in October 2010 to return to Missouri for additional treatment or she would die from her disorder. She says he left a phone message this October warning that if she sued, all of her memories of satanic rituals and abuse would be revealed.