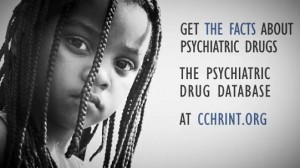 Foster children are being prescribed cocktails of powerful antipsychosis drugs just as frequently as some of the most mentally disabled youngsters on Medicaid, a new study suggests.

The report, published Monday in the journal Pediatrics, is the first to investigate how often youngsters in foster care are given two antipsychotic drugs at once, the authors said. The drugs include Risperdal, Seroquel and Zyprexa — among other so-called major tranquilizers — which were developed for schizophrenia but are now used as all-purpose drugs for almost any psychiatric symptoms.

“The kids in foster care may come from bad homes, but they do not have the sort of complex medical issues that those in the disabled population do,” said Susan dosReis, an associate professor in the University of Maryland School of Pharmacy and the lead author.

The implication, Dr. dosReis and other experts said: Doctors are treating foster children’s behavioral problems with the same powerful drugs given to people with schizophrenia and severe bipolar disorder. “We simply don’t have evidence to support this kind of use, especially in young children,” Dr. dosReis said.

In recent years, doctors and policy makers have grown concerned about high rates of overall psychiatric drug use in the foster care system, the government-financed program that provides temporary living arrangements for 400,000 to 500,000 children and adolescents. Previous studies have found that children in foster care receive psychiatric medications at about twice the rate among children outside the system.

The new study focused on one of the most powerful classes of drugs, antipsychotics. It found that about 2 percent of foster children took at least one such drug, even though schizophrenia and bipolar disorder, for which the drugs are approved, are extremely rare in young children.

“It’s a significant and important finding, and it should prompt states to improve the quality of care in this area,” said Dr. Mark Olfson, a professor of clinical psychiatry at Columbia University who did not contribute to the research.

In the study, mental health researchers analyzed 2003 Medicaid records of 637,924 minors from an unidentified mid-Atlantic state who were either in foster care, getting disability benefits for a diagnosis like severe autism or bipolar disorder, or in a program called Temporary Assistance for Needy Families. All of these programs draw on Medicaid financing. The investigators found that 16,969, or about 3 percent of the total, had received at least one prescription for an antipsychotic drug.

Yet among these, it was the foster children who most often got more than one such prescription at the same time: 9.2 percent, versus 6.8 percent among the children on disability, and just 2.5 percent of those in the needy families program.

Antipsychotic drugs, the authors said, also cause rapid weight gain and increase the risk for metabolic problems in many people, an effect that may be amplified by the use of two at once.

Doctors who treat such children are aware of the trade-offs and often prescribe lower doses of the medications as a result. And when they add a second such drug, it is often to counteract side effects of the first medication.