“Between 1929 and 1974, the state – through its North Carolina Eugenics Board – authorized sterilizations of about 7,600 North Carolina residents classified as mentally ill, epileptic or “feeble-minded,” which generally meant an IQ of less than 70, the Observer said.”  — North Carolina Observer, November 10, 2011  (read the rest of the article below our note)

Note from CCHR on Eugenics:  In 1869,  English psychologist Francis Galton created the word “eugenics” from the Greek word, eugenes, meaning “good stock.”  He encouraged using “better” human stock from which to breed, and discouraged what he considered “less desirable” stock from having children, evidently considering himself part of the “better” stock and thereby capable of judging the future for all humanity. In 1870, British psychologist Herbert Spencer claimed that selective breeding of the fittest would bring about a superior race, while the unfit should be allowed to die out.  These notions of cultural hierarchy caught on in the United States and by the 1920s, eugenics sterilization was practiced in two-dozen states, with California accounting for more than half of the 16,000 operations performed between 1907 and 1933.  Beyond that, they formed the basis of much of Hitler’s Mein Kampf and the Holocaust that followed. 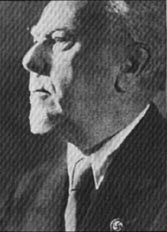 In 1933 psychiatrist Ernst Rudin was chosen by Hitler’s Reich Ministry to lead Germany’s racial purity program. Rudin wasted no time in drafting the Nazi Sterilization Law which originally called for the sterilization of “schizophrenics,” “alcoholics,” and “manic-depressives” — the subjects of Rudin’s “research.” As these legal sterilizations began, programs were already underway to sterilize “black” Germans. The sterilization program expanded to include Jews, Gypsies and, in the words of Rudin, other “inferior race types.”  By the end of World War II, two million had been sterilized.  The majority of those sterilized were between the ages of twenty and forty.

Ernst Rudin praised Hitler and the Nazis for their “decisive… path-breaking step toward making racial hygiene a fact among the German people… and inhibiting the propagation of the congenitally (hereditarily) ill and inferior.”  He stated, “Only through the Fuhrer did our dream of over thirty years, that of applying racial hygiene to society, become a reality.”

North Carolina officials report they have located only 41 survivors of thousands of state residents forced to undergo sterilization.

The Charlotte Observer reports state officials have spent more than a year trying to find those who had been sterilized so they can be compensated, because the operations were medically unnecessary and immoral.

Between 1929 and 1974, the state – through its N.C. Eugenics Board – authorized sterilizations of about 7,600 North Carolina residents classified as mentally ill, epileptic or “feeble-minded,” which generally meant an IQ of less than 70, the Observer said.

The newspaper said Wallace Kuralt, the head of the Mecklenburg County Welfare Department from 1945 to 1972, had a nationwide reputation as a leader in eugenic sterilization. In his words, his department sought clients from among “low mentality-low income families which tend to produce the largest number of children.”

Some women came to the state pleading to be sterilized, particularly before the birth control pill. But Mecklenburg County advocated the operations for people who were poor, disabled or in trouble, the Observer said.

Most of the sterilizations occurred in the 1950s and early 1960s.

Today, parents can ask a judge to have a child sterilized but only as a last resort.

Ellen Russell, director of advocacy for The Arc of North Carolina, a non-profit that works with developmentally and intellectually disabled people, says IQ is not a dependable measure of someone’s ability to raise children.

In June of this year, officials heard gut-wrenching testimony from men and women sterilized by the state during a 50-year period to cut welfare costs.

The stories of about a dozen of the nearly 7,600 people who were sterilized at the direction of the state were heard during testimony before a state task force that will recommend ways to compensate them, The (Raleigh) News and Observer reported.

From the 1920s to the 1970s, the state-funded Eugenics Board determined certain groups of people – the poor, undereducated or mentally unstable – were unfit for parenthood. Former Gov. Mike Easley apologized to the state’s eugenics victims in 2002, but there has been no compensation so far.

Gov. Bev Perdue and four state representatives attended the session, thanking the victims for sharing their stories, but made no promises of compensation.

“I came here as a woman, a mama, a grandmama, and a governor of the state to say that it was wrong,” Perdue said. “I’m here to tell you how important these hearings are.”

One woman, Elaine Riddick, 57, told the panel she became pregnant when she was raped at age 14, CBS News reported. The day she delivered her son, doctors sterilized her on orders from the state.

North Carolina state Rep. Larry Womble, a Democrat sitting on the task force, said he hoped lawmakers would pass legislation that would allow eugenics victims to receive compensation, as well as counseling and medical help.

“The people who were the focus of this movement were the dispossessed of society,” Paul Lombardo, of Georgia State University’s College of Law, said. “In some cases, simply people of color.”