Pharmaceutical giants spend billions a year to get doctors to prescribe drugs to American kids. Johnson & Johnson even passes out Legos advertising its latest anti-psychotic, ignoring mounting evidence that the drug causes diabetes, wild weight gain, and grows breasts in boys and girls who take it. Their solution? More pills 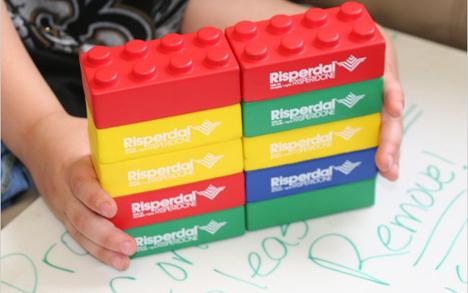 In the past decade, America’s pharmaceutical industry has knowingly marketed dozens of dangerous drugs to millions of children, a group that executives apparently view as a lucrative, untapped market for their products. Most kids have no one to look out for their interests except anxious parents who put their trust in doctors. As it turns out, that trust is often misplaced. Big Pharma spends massive amounts to entertain physicians, send them on luxury vacations and ply them with an endless supply of free products. As a result, hundreds of thousands of American kids—some as young as three years old—have become dependent on amphetamines like Adderall and a pharmacopeia of other drugs that allegedly treat depression, insomnia, aggression and other mental health disorders.

The fact that none of these powerful mood-altering medications have been approved by the FDA to treat children under 10 has posed no obstacle to the industry’s marketing masterminds. They’ve waved off objections by some some doctors who wonder how these complex drugs will affect the vulnerable brains and bodies of their young patients. Other experts have warned that children exposed to this multi-molecular barrage on their central nervous systems could potentially be at much higher risk of becoming adults who are addicted to chemicals, prescription and otherwise. But thanks to a billion-dollar advertising campaign, millions of kids across the nation are now taking pills to control a long  litany of “behavioral problems.”

Luckily, Johnson and Johnson is not getting off scot-free. Last week, Massachusetts Attorney General Martha Coakely announced that the state was suing the world’s biggest pharmaceutical firm, Johnson & Johnson, for illegally promoting Risperdal, an “atypical anti-psychotic”,  for off-label treatment of childhood schizophrenia, bipolar disorder, autism, hyperactivity and attention deficit disorder, depression and anxiety, sleep disorders, anger management, mood enhancement or stabilization. As BNet’s Placebo Effect blog recently reported, the list of maladies is grotesquely long. J&J, which prides itself on its high-minded credo of “always putting patients first,” began moving its new drug into this new market as soon as Risperdal won approval in adults—even though the FDA explicitly forbid it from doing so, for the simple reason that the firm had never done a single test of the drug in children who suffered from these or any other conditions.

Though Risperdal was marketed as a less dangerous—if not more effective—alternative to older “typical” anti-psychotics, it quickly became apparent that the drug had many worrisome side effects in adults, including the rapid onset of diabetes and alarming weight gains. But despite a growing weight of evidence about the drugs, J&J only stepped up its promotion of the drug for children—aiming for more conditions and in ever-younger kids—no doubt to squeeze as many profits as possible out of this lemon before the FDA ordered them to stamp a warning on the label or withdraw it from the market altogether.

Unsurprisingly, teens and kids started developing symptoms of drug-induced diabetes and weight gain. Several also developed a bizarre condition called galactorrhea, in which milk flows spontaneously from the nipples of your breasts—girls and boys alike—a happening that is likely to drive even the most balanced teen around the bend. What may be even more bizarre, when doctors alerted J&J sales reps to this side effect, sales reps relayed the warning to their managers, who advised the sales reps to tell the doctors (in a frankly illegal reversal of medical protocol) that rather than take the kids off Risperdal, they could be treated with yet another drug.

The Massachusetts case is the third of about 10 state lawsuits in which jurors will be asked to pass judgment on whether J&J’s Risperdal promotional practices constitute medical fraud. Class-action suits by patients (or parents) claiming injury are also in the works. The Obama administration has shown some guts in not simply allowing the giant drug makers to settle such lawsuits for giant fees ($2 billion is not unusual, however ho-hum to pharma) but in holding individual company executives personally liable for the criminal activity.

In fact this code of misconduct is what we have come to expect from the pharmaceutical industry: Always put profits first, break the law now, pay the fine years later. Given the high-risk nature of drug development—a novel compound costs close to $1 billion and a decade to get to market—Big Pharma has tried all manner of dark arts to increase its odds. Criminal activity, once largely limited to the sales divisions, has overtaken the entire endeavor. Clinical trials that produce negative data—including health risks—are hidden from the FDA. Early signals of serious side effects are covered up, as are promised follow-up studies upon which approval is conditioned. Like other industries, pharma and its lobbyists have regulators and Congress by the balls.

But it’s the corruption of the medical profession by the pharmaceutical industry that has proved most insidious, and nothing illustrates the perilous consequences better than J&J’s illegal marketing of Risperdal to kids. Making 100,000 sales calls on psychiatrists and pediatricians, the company lined the pockets of willing MDs employing familiar pharma ploys, from the small-change items like lavishing free samples, free lunches and—this may be a first—even free colorful plastic Lego blocks printed with the word RISPERDAL for children to play with in the waiting room, to the big-ticket items such as “educational” meetings at fancy resorts and “advisory board” soirees at the Four Seasons. The company even paid certain leading specialists hundreds of thousands of dollars a year to conduct J&J-designed trials and sign their name to J&J-written studies published in the top medical journals—providing a “scientific” spin to the promotional materials. In this amorphous manner, a professional consensus emerged that the atypical anti-psychotics were effective in very young children for attacks of rage, poor impulse control, defiant and oppositional behavior—the transient, irrational, sometimes frightening “acting out” that sends overworked adults around the bend.

By means of this closed circle or deceit and kickbacks, J&J beat out the competition to grab 50 percent of the pediatric market for anti-psychotics. And although many other psychiatrists and pediatricians were arguing that anti-psychotics should never be given to children under 10 in the first place, the white wall of silence in the medical profession generally prevents doctors from becoming whistleblowers unless prodded by investigative news reporting.

Everybody was profiting, it seemed, except for the kids.

Consider Kyle Warren, who as an 18-month-old Louisiana toddler began taking Risperdal prescribed by a pediatrician on the J&J payroll (plastic RISPERDAL Legos and all). Kyle suffered from frequent temper tantrums, and his mother, Brandy Warren, then 22, was a new mother on Medicaid and, as she told the New York Times, “at my wit’s end.” But like any good mother, Brandy kept on searching for the right diagnosis and the right treatment, going from doctor to doctor and amassing a contradictory set of assessments, such as autism, psychosis, schizophrenia, bipolar disorder, and attention deficit hyperactivity disorder. By the time he was age three, Kyle’s daily pill regimen resembled that of someone very old or very sick, including Risperdal, the antidepressant Prozac, uppers for ADHD and downers for insomnia. He was sedated, he drooled, and he was ballooning with fat from the side effects of the Risperdal—but, look Ma, no more temper tantrums!

read the rest of the article here: http://www.thefix.com/content/jj-sued-illegal-promotion-drugs-kids?page=all