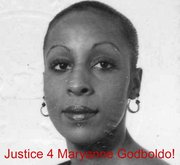 Note from CCHR:  Court documents now vindicate  Maryanne Godboldo in having every legal right to stop administering her daughter an antipsychotic drug documented by international drug regulatory agencies to cause agitation, aggression, cardiac arrest, fatal  blood clots, liver failure, mania, suicide and violence yet this did not stop the state from ordering an assault on this woman in her own home, complete with Swat Teams and a tank.  There can be no doubt that Child Protective Services were in violation of every legal and civil right this mother has to protect her daughter from harm, not to mention her fundamental right as a parent.   We’re not sure why this isn’t being investigated as kidnapping case, because Maryanne Godboldo’s daughter was for all intents and purposes, kidnapped under the authority of Child Protective Services.   We,  as a society, must stand up to the use of force in what our co-founder, Dr. Thomas Szasz calls “The Therapeutic State,” the alliance between psychiatry and government in exerting social control over citizens.  This is not an isolated incident of parents being pressured, coerced, threatened to administer drugs to their child, via “child protective services” on behalf of “the state.”

“In the therapeutic state, treatment is contingent on, and justified by, the diagnosis of the patient’s illness and the physician’s prescription of the proper remedy for it… Today, the therapeutic state exercises authority and uses force in the name of health.  The Founding Fathers could not have anticipated…that an alliance between medicine and the state would then threaten personal liberty and responsibility exactly as they had been threatened by an alliance between church and state.” — Thomas Szasz (read more here http://qr.net/38D )

Detroit — A mother accused of medical neglect for refusing to give her daughter a prescribed drug had authority to halt treatment, court files indicate.

The “informed consent” form signed by Maryanne Godboldo, who sparked a debate over parents’ rights when her daughter was removed from her care March 25, authorized her to give her daughter, Ariana, the antipsychotic drug Risperdal.

“It has been explained to me that I have the right to withdraw this consent at any time and can stop taking the medication at any time,” the form reads.

The agreement was signed June 3, 2010, by Godboldo and a psychiatrist associated with a children’s health organization that later complained to child welfare workers when Godboldo stopped giving her daughter the drug used in treatment of symptoms of schizophrenia and bipolar disorder.

Lawyers for the 13-year-old’s mother and father will be in Wayne County Circuit Court Juvenile Division today attacking the validity of a petition obtained on a medical emergency claim by a county Child Protective Services worker to take the girl from her home by force March 25. Ariana has since been kept in a state facility for mentally ill juveniles.

The social worker’s efforts to take Ariana set off a 12-hour siege after armed police broke open a door at Godboldo’s west side home and a shot was fired. The 56-year-old mother and the girl’s father, Mubarak Hakim, 58, face neglect claims and attempts by state authorities to make the girl a ward of the court and possibly resumption of drug therapy. Godboldo also is charged separately with criminal assault and resisting and opposing the three Detroit Police officers who entered her home.

The case has drawn nationwide attention from groups advocating parents’ rights, concerns about the safety of childhood immunizations and use of psychotropic drugs, and those opposed to government intrusion on personal decisions.

The form was signed by Dr. Rajendra Kanneganti, a psychiatrist associated with the Children’s Center of Wayne County. The treatment plan resulted from a mental health assessment of then 12-year-old Ariana after she was found by police wandering naked in her neighborhood last Memorial Day weekend.

The document, signed by the mother on behalf of her minor child, says, “I understand that I will not be forced to take this medication and that I can stop taking it at anytime. I also understand that discontinuation of prescribed medication without consultation with my doctor could cause my condition to worsen.”

“I think that document proves our case,” said Godboldo’s lawyer, Wanda Evans. “She understood she had a right to stop giving the medication. If you sign an informed consent that says you can stop, and you stop, you did the right thing, and CPS (Child Protective Services) is just being nasty.”

Kanneganti did not respond to a Detroit News telephone call.

A legal expert said the signed document might not carry much weight in court.

“In this case you do have these countervailing rights and obligations and they are difficult to assess,” said John Pirich, professor at Michigan State University College of Law. “But, in practice, a court usually looks first at the health, safety and welfare of the child.”

The News obtained access earlier this week to the previously withheld court file. The file was made available only after a lawyer for The News reminded officials that court files are open to the public under Michigan law.

The original petition to remove the child was obtained by case worker Mia Wenk, two weeks on the assignment, who expressed frustration with Godboldo’s lack of cooperation in her investigation of accusations of medical neglect from at least four sources, including the Children’s Center.

Evans said Godboldo consulted another doctor before weaning her daughter from the drug.

“Our intention is to begin an evidentiary hearing (today) on why the girl was removed from the home,” Evans said. “On what authority did they (Protective Services) act when it is a parent’s responsibility to make these decisions?”

Wayne County Child Protective Services workers last week filed an expanded explanation of claims. It quotes the clinical director of the facility where Ariana is being held, saying the girl, “may have a severe case of childhood onset schizophrenia, which would require medication for her to be treated properly.”

From The Detroit News: http://detnews.com/article/20110422/METRO/104220386/Medication-deal-for-girl-in-Detroit-standoff-backs-mom-s-case#ixzz1KGyn4Czu