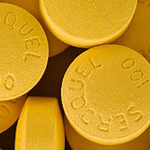 The FDA has finally decided to “stiffen warnings” about Atypical (the newer) antipsychotic drugs for causing birth defects and other problems to newborns when taken by pregnant mothers.  The article below states that the “FDA said it had received 69 reports of problems with newborns linked to the drugs before 2008.” We’re not sure what data they are looking at, but CCHR International has decoded the thousands of pages of FDA adverse side effects, and we found 159 instances of adverse reactions for the age -1 to 0 age category.

Moreover, the article says “some infants recovered within days, others required prolonged hospitalization.”  That clearly seems like downplaying the facts, when the actual reports include neonatal deaths, cerebralhemorrhage, heart malformations along with a host of other birth defects attributed to the Atypical Antipsychotic drugs, many of which were reported to the FDA by MDs.  Keep in mind the Medwatch reports that CCHR International decoded only include instances where the adverse reaction being reported was directly attributed to the drug in question being the primary suspect drug that caused it.  In other words, when multiple drugs were suspected as the cause, we excluded these in our decrypted reports.    See the information for yourself: In the drop down menu scroll all the way down past the individual names of drugs to the broad categories and select Atypical Antipsychotics, in the  range chose 0 to -1, in the Gender category select Both Male/Female and then hit Generate Report. And if you want to really be horrified, try the same search with 0 to 10 year olds.   And keep in mind, the FDA estimates that less than 1% of all serious events are ever reported to it and that you are only searching one class of drug. Try the same search for Antidepressants, Stimulants, Antipsychotics (not Atypical, just Antipsychotics), Anti-Anxiety drugs etc. Double click on any word (such as medical terms) for a pop up window giving a definition of the word/medical condition being reported.

For the Psychiatric Drug Side Effects Reported to the U.S. FDA Search Engine, click here: https://www.cchrint.org/psychdrugdangers

The FDA stiffens warnings about atypical antipsychotics during pregnancy

The Food and Drug Administration on Monday said that it is strengthening the warning label on the family of drugs known as atypical antipsychotics to warn women about the danger to infants of using the drugs in the third trimester of pregnancy. The drugs, which are used to treat schizophrenia and bipolar disorder, include such well-known medications as Abilify, Geodon, Haldol, Risperdal, Seroquel and Zyprexa, as well as several lesser-known products. The agency said most doctors are already familiar with the potential problems, but that it wanted to make sure that the information is as widespread as possible.

The FDA said it has received 69 reports of problems with newborns linked to the drugs before Oct. 29, 2008, including withdrawal symptoms, abnormal muscle movements — called extrapyramidal signs — excessive sleepiness, tremor, respiratory distress and feeding disorders. Some of the infants recovered within hours or a few days, while others required prolonged hospitalization.