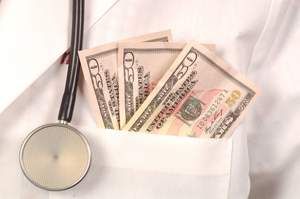 About 48 of the more than 1,730 California doctors who received money from pharmaceutical companies over the past 21 months have been the subject of disciplinary action, a database compiled by the investigative news organization ProPublica found.

While that represents less than 3 percent of the California doctors who take pharmaceutical money, the fact that drug companies are paying those doctors – some of whom have multiple disciplinary actions – for their expertise calls into question how closely these companies vet the physicians who serve as the spokespeople for their drugs.

California doctors have received $28.6 million from top pharmaceutical companies since 2009, with at least three physicians collecting more than $200,000 and 36 others making more than $100,000 for promoting drug firm products. That cash flowing from drug companies to doctors has raised ethical concerns from some observers.

Bero also questioned why drug companies – which presumably would want medical leaders who could influence prescribing patterns – would use doctors with a history of disciplinary actions.

“Are those really the most influential physicians?” she asked. “I don’t think they’re (the drug companies) on top of this.”

Payments to doctors and other health professionals made by Eli Lilly, GlaxoSmithKline, AstraZeneca, Pfizer, Merck, Johnson & Johnson and Cephalon, some of the world’s largest drug companies, added up to more than $281.9 million in 2009 and 2010 nationwide. The figures do not include drug samples, the cost of continuing education programs, and meals brought to doctors’ offices.

In total, 384 of the approximately 17,700 health professionals in the 30 states surveyed who received some money from drug companies in ProPublica’s database, almost all of them physicians, earned more than $100,000 apiece for their promotional and consulting work on behalf of one or more of the seven companies in 2009 through Oct. 19 of this year.

ProPublica found that the seven drug companies paid $6.7 million to 290 doctors who faced disciplinary action or other regulatory sanctions in various states.

San Francisco psychiatrist Karin Hastik, for example, took $168,658 in speaking and consulting fees from Eli Lilly, AstraZeneca and GlaxoSmithKline since 2009.

But in May, the Medical Board of California placed Hastik on probation for negligence, prescribing drugs without prior examination, and failing to keep adequate records about a patient she had been caring for since 2000. Hastik did not return calls for comment.

Dr. Gerald Sacks, an anesthesiologist with offices in Los Angeles and Santa Monica, was California’s top earner in the database, receiving $249,822 from drug companies since 2009. More than half – $150,097 – came from Pfizer.

In 2003, the state medical board cited Sacks, who did not return calls for comment, for failing to maintain adequate records of a patient he treated for back pain.

While the disciplinary actions in the database vary greatly – everything from failing to maintain accurate paperwork to sexual misconduct – some experts say the very act of taking large sums of money from pharmaceutical companies raises ethical concerns.

“It undermines the trust in the doctor-patient relationship,” said Maryann O’Sullivan, executive director for the Campaign for Effective Patient Care, a nonprofit based in Fairfax. O’Sullivan said patients shouldn’t have to worry if their doctors are making medication recommendations because they are beholden to drug company money.

Officials for several of the pharmaceutical firms told ProPublica that they intended to tighten and improve their selection and screening processes in light of the disciplinary results. ProPublica provided each company with lists of all speakers who had been disciplined in the 30 states and by the U.S. Food and Drug Administration.

A survey conducted in 2004 found that more than 80 percent of physicians had some relationship with the pharmaceutical industry, ranging from accepting drug samples to collecting consulting fees and participating in paid clinical trials.

Since that time, greater attention has been placed on the relationship between doctors and drug companies, and many hospitals and medical schools have adopted rules that limit these ties.

A survey published this month in the Archives of Internal Medicine found that more than 80 percent of doctors still had industry relationships, but the level of involvement had decreased. For example, the survey found the percentage of physicians receiving payment for speaking engagements and other services dropped from more than one-fourth in 2004 to 14.1 percent last year.

Several doctors who were not the subject of any disciplinary action but did take large sums from pharmaceutical companies told The Chronicle they spoke on behalf of only those drugs they believed in and thought they were performing an important educational service for other physicians.

Dr. Rona Hu, clinical associate professor at Stanford University School of Medicine, said she earned more money from speaking engagements in 2009 than usual because several drugs she prescribes became available for new uses. The psychiatrist said she has since stopped getting paid by drug firms to speak because Stanford tightened its policy regarding industry gifts to staff.

One of the top earners in Northern California, Palo Alto psychiatrist Manoj Waikar, who earned $185,875 since 2009, ended his affiliation with Stanford as an adjunct professor after the school extended its ban to adjunct staff in March.

“Speaking for drug companies is a great vehicle for me for teaching. I end up reaching more people who are eager to learn, especially in rural parts of the country,” he said, adding he does not disclose what drugs he prescribes to pharmaceutical companies so they hire him for his expertise, not because of his prescribing patterns. “As much as I loved teaching at Stanford, abiding by their rules would (keep) me from teaching as many people in as many ways as I can.”

Dr. Michael Lenoir of Oakland, who collected $112,600 from GlaxoSmithKline, said he uses his speaking engagements to visit urban and underserved areas around the country to discuss the high rate of asthma in black communities and the treatment options.

A San Francisco pain doctor who has earned $176,771 since 2009 from Pfizer and Cephalon said he doesn’t believe speaking for drug companies poses a conflict because he discloses the payments to his patients.

“So far, every patient has been OK with it,” said Dr. Wayne Anderson, adding that doctors who take money from equipment manufacturers and other medical suppliers don’t fall under the same scrutiny. “I don’t get bonus payments at the end of the month. I’m not trying to do anything secretive. I have complete transparency and honesty, and I tell people when I have been paid to promote a drug.”

About this story: It was produced in partnership with ProPublica, a nonprofit investigative news organization. To read the stories in the investigation and to search the ProPublica database on pharmaceutical company payments to doctors, go to projects.propublica.org/docdollars.