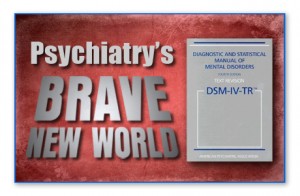 When thinking about psychiatry I find it hard to escape the comparison with the work carried out at assembly lines of large manufacturing companies and the process involved when faulty products are called back for inspection and repair. All mass produced goods are meant to basically look and function in the same way. The same can be said about the people in a state that promotes the idea of a moral code of conduct (e.g. Diagnostic and Statistical Manual of Mental Disorders, DSM). Through socialization and education we learn about what behaviours are appropriate and how one should feel and think about things. If individuals are judged to be “damaged” or “just not right”, they are sent away to be properly assessed and corrected. A whole army of “Quickfitters” is there to sort you out when you seem to have broken down and not function properly anymore, even if you don’t want that (well, actually, especially then).

It all seems to be about the intolerance of diversity and difference and the quest for total dominance and control, which results in the persecution and punishment of those individuals who step out of line as they are deemed to be out of order and in urgent need of corrective measures. The faultiness, that one is accused of, really boils down to a lack of conformity and obedience, i.e. behaving, thinking and feeling as directed by those who think they know best (e.g. mental health professionals).

Now, doesn’t that all sound strangely familiar? It is frighteningly similar to Huxley’s “Brave New World” (1932). Huxley’s world is built upon the principles of Henry Ford’s assembly line, i.e. mass production, homogeneity, predictability, and consumption of disposable consumer goods. From the beginning of life, members of every class are indoctrinated by recorded voices repeating slogans while they sleep to believe that their own class is best for them. Any residual unhappiness is resolved by an antidepressant and hallucinogenic drug called soma.

So what happens once you find yourself in the (dis-)comfort of a so called “mental hospital”? To understand this one first needs to call these facilities by their appropriate names. Correctional facilities or conversion centres are probably the most adequate terms to be applied to these institutions. The main task of these facilities is to stop you misbehaving and to start acting according to their rules. Resistance and protest, which is very understandable in situations when your liberty is taken away from you and you are being forced to comply and conform, is quickly regarded as just another expression of the seriousness of your faultiness and thus requires more intensive treatment (i.e. more force and violence).

It is true that psychiatric interventions (e.g. pharmacological, electroconvulsive, and conversational treatments) are often successful. But what does that actually mean? In psychiatric terms this means that one has managed to reduce (in terms of frequency and/or intensity) or remove particular symptoms (i.e. a bunch of undesirable behaviours). This could be because he/she simply does not want to be a mental patient any longer and just plays along according to the psychiatric rules. This can of course mean that one is denying one’s own thoughts, feelings, values, and aspirations, in order to please one’s masters, captors and owners. Alternatively, he/she might actually believe that psychiatric interventions are an effective way of combating what he he/she believes to be a psychological problem. Beliefs are important here, just as in the religious sphere of theological interventions such as confessions (being repentant, paying penance and being ultimately forgiven for one’s sins). However, just like in the case of religion, having undergone successful theological treatment does not prove that one has been possessed by a demon (or that one’s behaviour has been caused by some sort of mental illness) or that one would otherwise have been condemned to go to hell (or destined to suffer from a lifelong mental illness). So what is it that has ultimately been treated or cured? I would argue that one has abolished misbehaviour, and replaced it with compliance and obedience. One has simply been successfully shut up (both literally and metaphorically).

Man’s hunger for power seems insatiable. Many pursuits of mankind (e.g. religion, politics, science, etc.) have been attempts to control and dominate, and they remain locked in a constant battle with each other over maximising their influence and power. Science, for example, has always followed its agenda to control and dominate nature (e.g. natural resources, diseases, etc.), something that in modern history has been expanded to include other human beings, as they are simply regarded as byproducts of nature. Psychiatrists, who arguably represent the discipline of medicine, have for hundred of years argued that social problems are caused by mental illness, and maintained that they should be given sole power to cure the diseased minds. This has resulted in psychiatry having successfully created a monopoly for the assessment and response to all sorts of human affairs. It has grown to an immensely powerful institution (only rivalled by totalitarian systems) of being able to define what constitutes “mental illness” (legislative power), judge what kinds of behaviours, thoughts and feelings signify “mental illness” (judiciary power), and punish those who are judged to be “mentally ill” by means of enforced incarceration, drugging, shocking, and moral therapy (executive power).

Rather than having to think about having to make the effort of time-consuming, large scale and wide ranging changes within society, the idea that there is simply something wrong with a bunch of individuals and that everything is going to be alright once their heads have been sorted out,  seems  comforting and appealing. Any form of dissent, disobedience  or non-conformity in relation to the predominant mental health ideology quickly becomes labelled as a form of mental illness. Let’s take the example of one of the most widespread psychiatric diagnoses amongst children and adolescents in the world, i.e. ADHD (Attention Deficit Hyperactivity Disorder). I argue that this psychiatric diagnosis pathologises childhood behaviour of not paying attention, having a lot of energy, and not wanting to sit still for hours on end. What these children might be guilty of are the “crimes” of striving for independence and autonomy, questioning the usefulness of the curriculum, their assignments and homework, and challenging the arbitrariness of authority of being told what they should do and what they shouldn’t do. As a society we seem to have very rigid ideas of what we expect from each other, often to an extent that can only be described as questionable in terms of purpose, stifling and hindering any kind of progress. In short, it maintains the status quo, the way things have always been. But who benefits from all this? I would argue that it ultimately serves an elite class in society that holds the power to make decisions, such as the decision to punish children who misbehave according to their standards, by calling them names, drugging them, or imposing some form of moral therapy (e.g. correct ways of behaving, thinking and feeling). As already stated above, the psychiatric ideology provides an easy explanation and an easy solution. We are spared the inconvenience of having to venture down a different avenue, to explore a path off the beaten track. Psychiatry leads the way and we follow like stupid cattle. When we focus on something like “ADHD” we no longer think about more important issues such as the usefulness of the current national curriculum (e.g. what we think is important to teach our children; whether our education system is educating at all), classroom sizes, grading systems, the promotion of competitiveness at the expense of collaboration, lack of teaching resources, inadequate teacher training, staff turnover, etc.

What I have said about ADHD, can be applied to all so called psychiatric disorders, e.g. depression, autism, schizophrenia, personality disorder, etc. What all these psychiatric labels have in common is that they are applied when psychiatrists are of the opinion that there has been some form of misconduct, i.e. a transgression of a moral code. Throughout history and across cultures societies have always provided their own codes of conduct and guidelines of how one should behave and how to respond to people who broke the rules. The point I would like to make here, though, is that we are talking about morality (i.e. good and bad) here and not about science as psychiatry would have it. While one can argue that in the natural sciences things are being discovered (e.g. electricity, magnetism, etc.) the same cannot be said in the case of psychiatry. Here things are not discovered but simply defined. If mental illnesses were real illnesses (such as that of the brain) and not simply metaphors they would be called brain illnesses. Psychiatry, however, is not about what you have (a disease of the liver or heart that can be objectively measured) but about what you do. Various behaviours are simply clustered into symptom groups and given scientific sounding names. So, for example, if you are shy and do not enjoy going to parties you can easily be classified as suffering from an anxiety disorder called social anxiety disorder. One can easily create one’s own scientific sounding labels by arguing that certain behaviour patterns signify the existence of some underlying psychopathology. For example, one could label people who do not like to eat meat or use any kind of animal products as suffering from some kind of deep rooted animal anxiety. Likewise, one could come up with a similarly ludicrous idea of declaring people who happen to like to stand on their head while singing the national anthem as suffering from some kind of subversive personality disorder. The point here is that one simply does not discover underlying mental illnesses but simply attempts to arbitrarily categorise behaviours into groups and give them names. A real important issue here is that of name giving, that is to define things, which when done by a more powerful group (e.g. priests, doctors, academics, and politicians) and applied to a less powerful group (e.g. believers, ordinary citizens, patients, and students) is always problematic.

A final concern I have is the general view of people that is promoted by the therapeutic industry. It is argued that many people are simply too sick, unwell, disordered or distressed and therefore unable to help themselves. It creates an image of people in today’s society as vulnerable, weak and incompetent emotional wrecks who are in desperate need of some sort of help from the therapeutic state. This image of people being too stupid to sort out their own personal affairs gets repeated over and over again so that it becomes  deeply ingrained into our minds. Surely, the therapeutic apparatus is only one of many other sectors (e.g. litigation, education, child rearing, politics, etc.) that have continued to rob people of their experience, competence, right, duty and responsibility to deal with every day life and sort out their own difficulties. This continued professionalisation of everyday life has condemned people to passivity, indifference, and ignorance. It is no longer up to the general public to manage their own lives. It is up to the technocrats to do that for them, which according to this elitist class is in their very best interest.

Dominik Ritter is a psychologist, writer,  lecturer, social critic, and founder of the Blue Panthers Party, a critical psychiatry group.