FOR decades, antipsychotic drugs were a niche product. Today, they’re the top-selling class of pharmaceuticals in America, generating annual revenue of about $14.6 billion and surpassing sales of even blockbusters like heart-protective statins.

While the effectiveness of antipsychotic drugs in some patients remains a matter of great debate, how these drugs became so ubiquitous and profitable is not. Big Pharma got behind them in the 1990s, when they were still seen as treatments for the most serious mental illnesses, like hallucinatory schizophrenia, and recast them for much broader uses, according to previously confidential industry documents that have been produced in a variety of court cases.

Anointed with names like Abilify and Geodon, the drugs were given to a broad swath of patients, from preschoolers to octogenarians. Today, more than a half-million youths take antipsychotic drugs, and fully one-quarter of nursing-home residents have used them. Yet recent government warnings say the drugs may be fatal to some older patients and have unknown effects on children.

The new generation of antipsychotics has also become the single biggest target of the False Claims Act, a federal law once largely aimed at fraud among military contractors. Every major company selling the drugs — Bristol-Myers Squibb, Eli Lilly, Pfizer, AstraZeneca and Johnson & Johnson — has either settled recent government cases for hundreds of millions of dollars or is currently under investigation for possible health care fraud.

Two of the settlements, involving charges of illegal marketing, set records last year for the largest criminal fines ever imposed on corporations. One involved Eli Lilly’s antipsychotic, Zyprexa; the other involved a guilty plea for Pfizer’s marketing of a pain pill, Bextra. In the Bextra case, the government also charged Pfizer with illegally marketing another antipsychotic, Geodon; Pfizer settled that part of the claim for $301 million, without admitting any wrongdoing.

The companies all say their antipsychotics are safe and effective in treating the conditions for which the Food and Drug Administration has approved them — mostly, schizophrenia and bipolar mania — and say they adhere to tight ethical guidelines in sales practices. The drug makers also say that there is a large population of patients who still haven’t taken the drugs but could benefit from them.

AstraZeneca, which markets Seroquel, the top-selling antipsychotic since 2005, says it developed such drugs because they have fewer side effects than older versions.

“It’s a drug that’s been studied in multiple clinical trials in various indications,” says Dr. Howard Hutchinson, AstraZeneca’s chief medical officer. “Getting these patients to be functioning members of society has a tremendous benefit in terms of their overall well-being and how they look at themselves, and to get that benefit, the patients are willing to accept some level of side effects.” 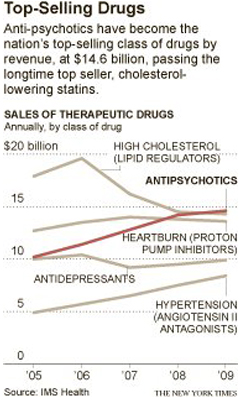 The industry continues to market antipsychotics aggressively, leading analysts to question how drugs approved by the Food and Drug Administration for about 1 percent of the population have become the pharmaceutical industry’s biggest sellers — despite recent crackdowns.

Some say the answer to that question isn’t complicated.

“It’s the money,” says Dr. Jerome L. Avorn, a Harvard medical professor and researcher. “When you’re selling $1 billion a year or more of a drug, it’s very tempting for a company to just ignore the traffic ticket and keep speeding.”

NEUROLEPTIC drugs — now known as antipsychotics — were first developed in the 1950s for use in anesthesia and then as powerful sedatives for patients with schizophrenia and other severe psychotic disorders, who previously might have received surgical lobotomies.

But patients often stopped taking those drugs, like Thorazine and Haldol, because they could cause a range of involuntary body movements, tics and restlessness.

A second generation of drugs, called atypical antipsychotics, was introduced in the ’90s and sold to doctors more broadly, on the basis that they were safer than the old ones — an assertion that regulators and researchers are continuing to review because the newer drugs appear to cause a range of other side effects, even if they cause fewer tics.

Contentions that the new drugs are superior have been “greatly exaggerated,” says Dr. Jeffrey A. Lieberman, chairman of the psychiatry department at Columbia University. Such assertions, he says, “may have been encouraged by an overly expectant community of clinicians and patients eager to believe in the power of new medications.”

“At the same time,” he adds, “the aggressive marketing of these drugs may have contributed to this enhanced perception of their effectiveness in the absence of empirical evidence.”

Others agree. “They sold the story they’re more safe, when they aren’t,” says Robert Whitaker, a journalist who has written two books about psychiatric medicines. “They had to cover up the problems. Right from the start, we got this false story.”

The drug companies say all the possible side effects are fully disclosed to the F.D.A., doctors and patients. Side effects like drowsiness, nausea, weight gain, involuntary body movements and links to diabetes are listed on the label. The companies say they have a generally safe record in treating a difficult disease and are fighting lawsuits in which some patients claim harm.

The cases, both civil and criminal, against many of the world’s largest drug makers have unveiled hundreds of previously confidential documents showing that some company officials were aware they were using questionable tactics when they marketed these powerful, expensive drugs.

Such marketing, according to analysts and court documents, included payments, gifts, meals and trips for doctors, biased studies, ghostwritten medical journal articles, promotional conference appearances, and payments for postgraduate medical education that encourages a pro-drug outlook among doctors. All of these are tools that federal investigators say companies have used to exaggerate benefits, play down risks and promote off-label uses, meaning those the F.D.A. hasn’t approved.

Lawyers suing AstraZeneca say documents they have unearthed show that the company tried to hide the risks of diabetes and weight gain associated with the new drugs. Positive studies were hyped, the documents show; negative ones were filed away.

According to company e-mails unsealed in civil lawsuits, AstraZeneca “buried” — a manager’s term — a 1997 study showing that users of Seroquel, then a new antipsychotic, gained 11 pounds a year, while the company publicized a study that asserted they lost weight. Company e-mail messages also refer to doing a “great smoke-and-mirrors job” on an unfavorable study.

“The larger issue is how do we face the outside world when they begin to criticize us for suppressing data,” John Tumas, then AstraZeneca’s publications manager, wrote in a 1999 e-mail. “We must find a way to diminish the negative findings,” he added. “But, in my opinion, we cannot hide them.”

Tony Jewell, an AstraZeneca spokesman, said last week that the company had turned over all that material to the F.D.A. as part of the approval process and updated its label over the years to show the latest safety information.

Dr. Stefan P. Kruszewski, a Harvard-educated psychiatrist who once worked as a paid speaker for several drug makers, became a government informant and now consults for plaintiffs suing drug companies. Earlier in his career, he spoke at events for Pfizer, GlaxoSmithKline and Johnson & Johnson as an advocate of antipsychotics. He said one company offered him incentives of $1,000 or more every time he talked to an individual doctor about one of its drugs.

“When I started speaking for companies in the late 1980s and early ’90s, I was allowed to say what I thought I should say consistent with the science,” he recalls. “Then it got to the point where I was no longer allowed to do that. I was given slides and told, ‘We’ll give you a thousand dollars if you say this for a half-hour.’ And I said: ‘I can’t say that. It isn’t true.’ ”

Slides for one new antipsychotic drug contended that it had no neurological side effects. “They made it all up,” Dr. Kruszewski said. “It was never true.”