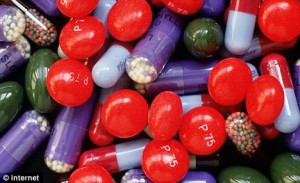 We spend more than £250 m a year on antidepressants in the UK – and it’s a complete waste of money.

They are not much better than sugar pills, they have nasty side – effects, such as sexual dysfunction, and they increase young people’s risk of suicide.

New research shows they don’t even work on the brain in the way we thought they did.

For years we were told depression was caused by low levels of a brain chemical called serotonin, and that antidepressants worked by boosting it.

But an Australian study published in the Archives of General Psychiatry shows that rather than low levels, depressed people might have double the normal amount in some parts of their brains.

Many people were surprised by these new findings, but I wasn’t.

I’ve been studying antidepressants for more than a decade, and I knew that if they worked at all, it wasn’t by changing brain chemistry.

The major reason you feel better when taking an antidepressant – maybe the only reason – is the placebo effect.

When I first published a paper back in 1998 saying that antidepressant drugs such as Prozac and Seroxat were not much better than a placebo, almost everyone thought it couldn’t be true.

There was so much evidence they worked. Thousands of people claimed the drugs had turned their lives round.

My colleagues said that I must have made a mistake: either I had looked at the wrong data, or I hadn’t analysed it properly.

In fact, what I’d done was to look at the research on antidepressants in a different way from everyone else.

Other researchers were concentrating on how much better the drugs were than a placebo.

What I was interested in was finding out how strong the placebo effect was in treating depression.

I compared the placebo effect to having no treatment at all – no one had done that before.

We already knew that placebos could have a powerful effect in conditions such as pain, angina, ulcers and asthma.

Depression was an obvious next step, because when you are depressed you lose hope, and placebos give you hope.

But I was flabbergasted by just how big the placebo effect was.