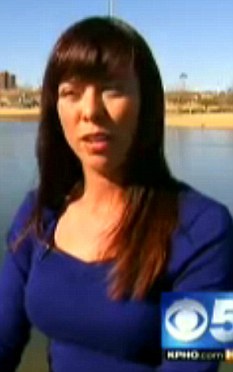 A teacher has been fired over her bumper sticker which mocked parents who mollycoddle their children. Tarah Ausburn put the ‘Have you drugged your kid today?’ sticker on her Toyota Prius in protest at what she claims is the overmedication of today’s children. She has 60 other such stickers on the car including ‘Recycle or die’ and ‘A clear conscience is a sign of a bad memory’. Five parents at Imagine Prep High School in Surprise, Arizona, objected to the suggestion that their children were on drugs and when they complained Ms Ausburn was asked to remove it or park her car off school grounds. She refused and was fired.
The incident has sparked a huge row over first Amendment rights with Ms Ausburn refusing to back down.

She told Arizona’s KPHO TV: ‘It’s kind of a criticism of us tending to over-medicate hyperactive kids who might not need those medications.’