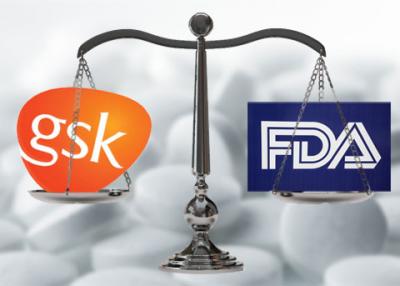 Lauren Stevens, the Glaxo associate general counsel, who is charged with one count of obstructing an official proceeding, one count of falsifying documents before a federal agency and four counts of making false statements to the FDA, has heard evidence given to a jury by James Millar, GSK vice president of strategic pricing, contracting and marketing. Millar had originally refused to testify but prosecutors persuaded the US District Judge [Roger W. Titus] to order him to give his testimony. 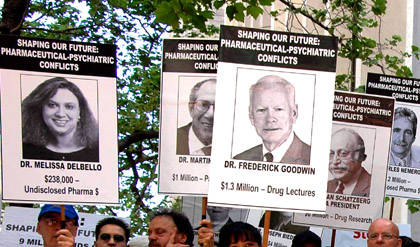 At the annual American Psychiatric Association meeting in New Orleans this summer, 200 protestors chanted “no conflicts of interest” and held up photos of individual doctors outside the convention center. Inside the hall, their charges were verified. The meeting’s Daily Bulletin disclosed that the APA president himself, Alan Schatzberg, has 15 links to drug companies including stock ownership and serving on a speakers bureau. Doctors on other speaker bureaus like Shire’s Ann Childress and Wyeth’s Claudio Soares gave presentations and workshops that — surprise! — extolled company drugs. And signing books, side by side, was the duo now accused of penning an entire book for the drug industry: Alan Schatzberg and Charles Nemeroff.

This month ProPublica and the New York Times report that Schatzberg and Nemeroff’s book, Recognition and Treatment of Psychiatric Disorders: A Pharmacology Handbook for Primary Care, may be the first entirely drug industry-approved textbook ever. Published in 1999, the book’s preface says it was funded by an unrestricted education grant to Scientific Therapeutics Information through London-based GlaxoSmithKline (GSK). Scientific Therapeutics Information of Springfield, NJ is the same medical publishing company that spun Vioxx.

A former lawyer for pharmaceutical giant GlaxoSmithKline Plc has been indicted for lying and obstructing an investigation into the company’s promotion of an anti-depressant drug, the U.S. Justice Department said on Tuesday. The lawyer, Lauren Stevens, was indicted on four counts of making false statements, one count of obstruction of justice and one count of falsifying and concealing documents related to Glaxo’s promotion of the drug for weight loss, which had not been approved by the Food and Drug Administration. “Where the facts and law allow, the Justice Department will pursue individuals responsible for illegal conduct just as vigorously as we pursue corporations,” said Tony West, head of the Justice Department’s civil division.