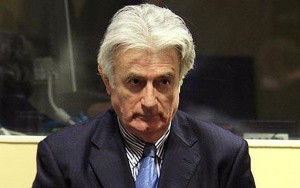 Karadzic, who was captured in Belgrade last year after more than a decade on the run, faces 11 charges including two counts of genocide for allegedly masterminding Serb atrocities throughout the conflict from 1992 to 1995, including the 1995 Srebrenica massacre, in which more than 8,000 Bosnian Muslim men and boys were rounded up and slaughtered by Serb forces.