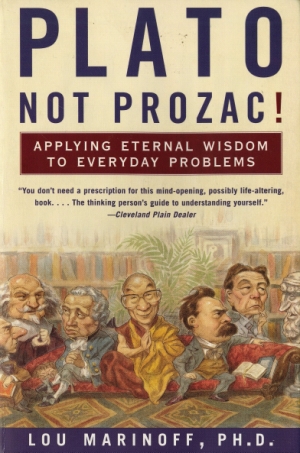 “Empty is the argument of the philosopher which does not relieve any human suffering.” — Epicuris

Emotional distress is not necessarily a disease. Modern psychiatry, however, appears to thrive on this model. Marinoff points out the growth of its major reference book, “The Diagnostic and Statistical Manual” (DSM). Marinoff says that just about any conceivable behavior can end up listed in the DSM and diagnosed as a symptom of mental illness.

This is in spite of the fact that a majority of the mental illnesses listed in the DSM have never been shown to be caused by any brain disease.

In 1952, the DSM listed 112 disorders. The current edition, first published in 1994, presents nearly 400 disorders. The target date for the next edition is 2012. One wonders how long its list of disorders will be. Marinoff claims “…the pharmaceutical industry and the psychiatrists who prescribe their drugs are committed to identifying as many ‘mental illnesses’ as theypossibly can.”

This, of course, results in the transfer of a lot of wealth and power in their direction. In the 1980s, psychiatrists suggested that about 10 percent of the U.S. population was mentally ill. By the 1990s, the number was up to 50 percent.