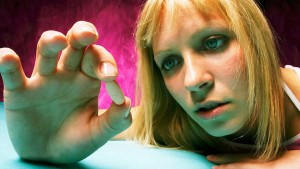 Female sexual dysfunction – which is claimed to affect up to two thirds of women – is a disorder invented by the pharmaceutical industry to build global markets for drugs to treat it, it is claimed today. Drug companies have invested millions in the search for a female equivalent of Viagra, so far without success. But while doing so they have stoked demand by creating a buzz around the disorder they have created, according to Ray Moynihan, a lecturer at the University of Newcastle in Australia.

Not interested in sex? Perhaps you have a condition called hypoactive sexual desire disorder, caused by a brain chemical imbalance. That’s the message conveyed in a new “educational campaign” launched last week by the Society of Women’s Health Research with actress Lisa Rinna as a celebrity spokesperson talking about “the brain’s potential role in desire.” On the campaign’s new website, you might conclude that if you’re not fantasizing about sex a lot you should definitely talk to your doctor.

The disorder is a branch of “female sexual dysfunction,” a widely debated term that involves everything from an inability to reach orgasm to a lack of desire. Described as a “Viagra-like drug for women” by one of the drug trials’ principal investigators, the former antidepressant flibanserin is prompting an outcry from critics who say female sexual dysfunction is a disorder the pharmaceutical industry has conjured as an attempt to capitalize on women’s complex sexuality.

Flibanserin failed its trials as an anti-depressant, but when its maker, Boehringer, asked test subjects to return the unused portion, patients were reluctant. Boehringer funded a study at the University of North Carolina, which now reports that Flibanserin increases a woman’s sex drive. A lot of the media is touting this as “female Viagra,” but it’s really no such thing.