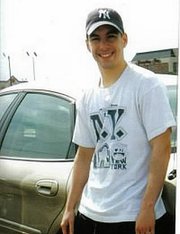 Darkness hung over Charleston Harbor as Matthew Steubing parked his Ford pickup truck on the aging bridge and left a note on the seat beside his Bible. He put on a life jacket and began to climb — up, up, into the span’s superstructure. Then, he jumped.

His parents were waiting for Matthew to arrive home in Winchester, Va., when they received the news on July 18, 2003. Their 18-year-old son plunged more than 160 feet from the Silas Pearman Bridge before slamming into the Cooper River. He was gone. “Our world blew apart,” his mother, Celeste Steubing, said. “We couldn’t imagine this happening because this wasn’t Matthew. … It made no sense.” Matthew, the youngest of six children, had been a vibrant kid, happy and full of life. But after a rough patch in his senior year of high school left him feeling down, a psychologist suggested he would benefit from the antidepressant drug Lexapro. He soon became withdrawn and anxious, his parents recalled during a recent visit to Charleston. Matthew committed suicide just nine weeks after starting on the drug. Only later did his family learn that antidepressants carry a heightened risk of suicide in children, the Steubings said. The Steubings have made it their mission to warn other parents about the hidden dangers of psychiatric drugs. To that end, Celeste Steubing was featured in the recently released documentary, “Dead Wrong,” produced by the Los Angeles-based Citizens Commission on Human Rights.