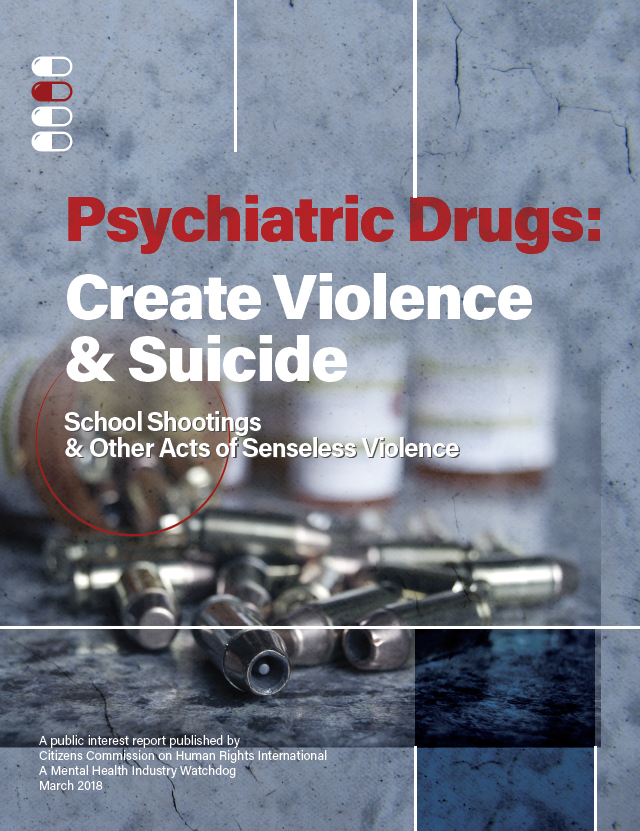 What is causing mass shootings and other senseless acts of violence?

Although there can be numerous reasons for mass murder, violent crime and suicide, with just as many solutions proposed to curb it and funding poured into its prevention, senseless acts of violence continue unabated. And one aspect which has never been the subject of a government investigation, is the link between such heinous acts of senseless violence and those under the influence of mind-altering psychotropic drugs, documented to cause violence, mania, psychosis, depersonalization and even homicidal ideation.

The mental health watchdog group, Citizens Commission on Human Rights (CCHR) International created a fully documented 64-page report that details more than 60 examples of school and mass shootings, stabbings and senseless violent acts committed by those under the influence of psychotropic drugs or experiencing serious withdrawal from them. It also provides more than 30 studies that link antidepressants, antipsychotics, psychostimulants, mood stabilizers and sedative hypnotics to adverse effects that include hostility, mania, aggression, self-harm, suicide and homicidal thoughts.

Media quote experts saying that such individuals are “mentally disturbed,” or have “untreated mental illness,” but that doesn’t explain the level of violence we are seeing or what drives a person to pull a trigger or intentionally crash an airplane, killing all 150 people on board.

A review of scientific literature published in Ethical Human Psychology and Psychiatry regarding the “astonishing rate” of mental illness over the past 50 years revealed that it’s not “mental illness” causing the problem; rather, it’s the psychiatric drugs prescribed to treat it. Mental disorder is not a predictor of aggressive behavior; however, the drugs prescribed to treat it are documented to cause such behavior. Whatever psychiatric assessment, “treatment,” including the drugs reportedly given the teen charged over the Parkland school massacre, all failed to predict or prevent the murderous outcome and potentially exacerbated his troubled mental state.

Drug proponents argue that there are many shootings and acts of violence that have not been correlated to psychiatric (psychotropic) drugs, but that is exactly the point. It has neither been confirmed nor refuted, as law enforcement is not required to investigate or report on prescribed drugs linked to violence, and media rarely pose the question.

CCHR is clear that not every violent killer has been documented to be under the influence of, or withdrawing from a psychotropic drug at the time of committing a crime, but in many cases such drugs only emerge when investigative reporters probe the killer’s background. And the media does not always ask the right questions.

Therefore, some of the recommendations in the report include: