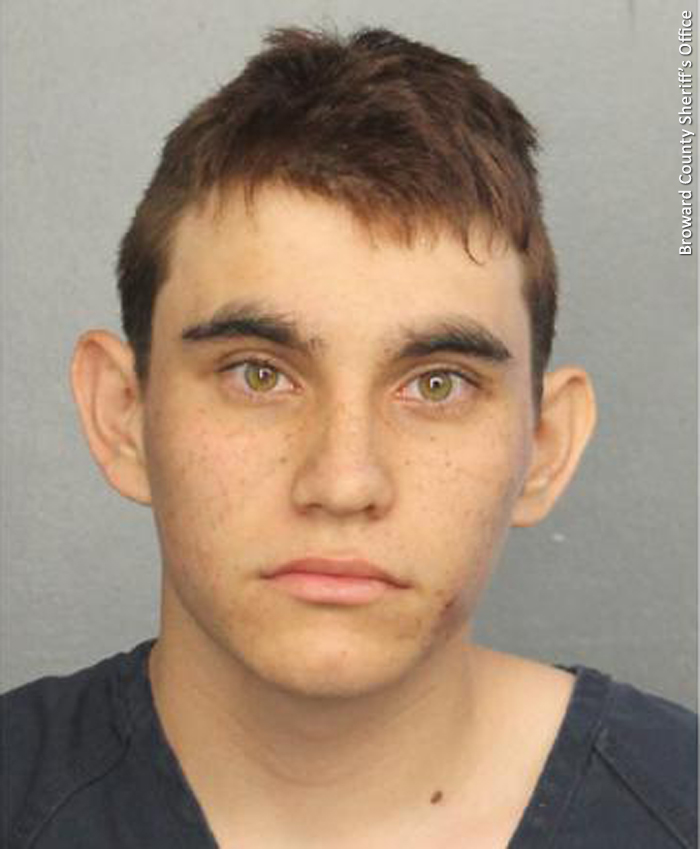 On February 14, 2018: Nikolas Cruz, 19, who had never been arrested or had a criminal record until this Valentine’s Day, went to Marjory Stoneman Douglas High School in Parkland, Florida, pulled an AR-15 from a black duffle bag, and began gunning down former classmates and teachers, killing at least 17 people and injuring 15 others. [1]

The following is a time line—gleaned from media reports—about the shocking failure of the psychiatric-psychological-behavioral system to predict or prevent this tragedy, despite billions of dollars invested in it. Mental health budget cuts didn’t cause Cruz to commit murder. Pouring millions more dollars into the system will not prevent similar incidents from happening again, because the system is fundamentally flawed, the treatment offered frequently harmful and, a percentage of those taking psychotropic drugs prescribed them, may drive them to acts of violence or suicide. Psychotropic drugs, or withdrawal from them, do not excuse the crime, but they may explain a frame of mind that can drive some—not all—to commit such heinous acts.

Prior to the Florida school shooting, at least 36 school shootings and/or school-related acts of violence have been committed by those taking or withdrawing from psychiatric drugs resulting in 172 wounded and 80 killed (in other school shootings, information about their drug use was not always made public—neither confirming or refuting if the killers were under the influence of prescribed drugs or had undergone other behavioral therapy.)[2]  https://www.cchrint.org/school-shooters/

At least 27 international drug regulatory agency warnings have been issued on psychiatric drugs linking them to mania, violence, hostility, aggression, psychosis, and homicidal ideation (thoughts or fantasies of homicide that can be planned).[3] 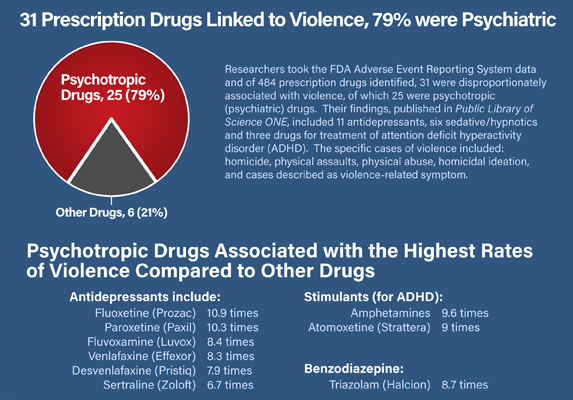 Training teachers and others in “detecting” mental illness is not a deterrent. Even an American Psychiatric Association (APA) task force report admitted, “Psychiatric expertise in the prediction of ‘dangerousness’ is not established….”[4] Stephen D. Hart, a psychologist at Simon Fraser University in Vancouver stated: “There is no instrument that is specifically useful or validated for identifying potential school shooters or mass murderers.”[5] While David Kirschner, Ph.D., a New York forensic psychologist who has tested and/or evaluated 30 teenage and young adult murderers, pointed out that “almost all of them had been in some kind of ‘treatment,’ usually short term and psychoactive drug-oriented, before they killed.” [6]

Diagnosed with a “mental disorder” does not mean that the person has a higher potential to become violent than someone not so labeled. A review of scientific literature published in Ethical Human Psychology and Psychiatry regarding the “astonishing rate” of mental illness over the past 50 years revealed that it’s not “mental illness” causing the problem, but, rather, the psychiatric drugs prescribed to treat it.[7] Since the introduction of antipsychotics in 1955 and the newer Selective Serotonin Reuptake Inhibitors (SSRI) antidepressants, like Prozac, in 1987, both have been linked to causing aggressive or violent effects. 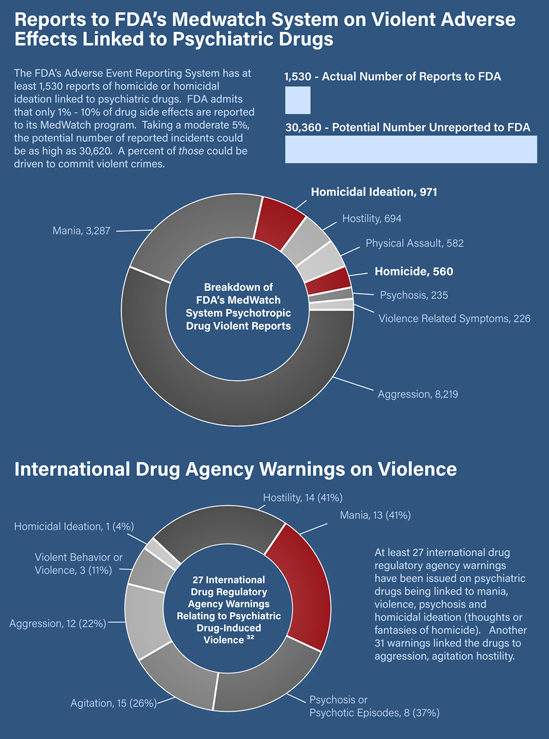 When a school or other mass shooting occurs, the first questions shouldn’t be: “‘Is the perpetrator mentally ill?’ or “Did he stop taking his medication causing his illness to re-occur?” Rather, it should be “Is the person responsible taking a psychiatric drug that could be causing homicidal adverse effects while on or withdrawing from it?”

2009-2010: Paul Gold lived next door to the Cruz family and recently told media: “He had emotional problems and I believe he was diagnosed with autism.  He had trouble controlling his temper. He broke things. He would do that sometimes at our house when he lost his temper. But he was always very apologetic afterwards.” Gold added: “He would sometimes be hitting his head and covering his ears.”[9]

2010-November 2016: Broward County sheriff’s deputies responded to at least 36 emergency 911 calls from the home where Cruz lived with his younger brother, Zachary, and adoptive mother, Lynda. [10]

January 15, 2013: Lynda Cruz called the police saying 14-year-old Nikolas had refused to go to school that day, so she took away his Xbox “privileges” and stashed the computer game system in her vehicle. That enraged her son, who “retaliated and threw a chair, dog bowl and a drinking glass across the room.” Mrs. Cruz told police Nikolas had a “history of developmental and learning disabilities,” was “increasingly irate” and suffered from “ADHD.” Police placed the teen in handcuffs and sat him in the back of the police car while they interviewed Mrs. Cruz. Nina Barela, a counselor from the nearby Henderson Behavioral Health facility, where Cruz was a client for years, arrived at the home and “gave Nikolas his prescribed medication.” [12]

When Cruz was a student at Westglades Middle School, he was constantly in trouble for insulting teachers and staff, using profanity, disruptive behavior, unexcused absences and at least one fight. His mother was called in more than a dozen times for conferences and Cruz was frequently sent to counseling. In September 2013, he received an internal suspension from the school for unruly/disruptive behavior.[14]

2016: Cruz was in the Stoneman Douglas Army Junior Reserve Officer Training Corps (JROTC).  He excelled at shooting, with other cadets calling him the “wolf.”[15] He was expelled in early 2017. This begs the question how he was even enrolled in a marksmanship course, being taught to use guns, when he had reportedly taken or was still taking “ADHD medication.” The marksmanship course is taught using air rifles.[16] Regardless, since 2014, the Department of Defense’s medical qualification standards regarding ADHD stimulants disqualifies applicants if they have been treated with ADD/ADHD drugs within the previous year and/or they displayed signs of ADD/ADHD. For applicants off medication for more than one year, and do not demonstrate significant impulse activity or inattention, they may apply for a waiver.  Waivers are only reviewed on a doctor prescribed program for minor attention deficit issues.  Any depression or other mental health problems associated with some ADD/ADHD label tips the scale into an area of medically disqualifying issues that are not waiverable.[17] A military lawyer advised that the regulations also apply to ROTC. (It is unknown what the Junior ROTC regulations are but, arguably, should follow the adult program in relation to stimulant or other psychotropic drugs.) 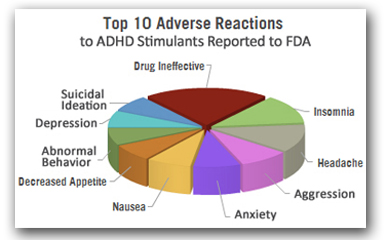 ADHD stimulants such as Ritalin and Adderall are known to cause hallucinations, behavior changes, aggression, abnormal thoughts, sudden outbursts, thoughts of suicide and mood swings.[18]

September 2016: He was suspended for two days for fighting, only to return to be suspended again nine days after the fight, this time for hurling profane insults. [20]

A week after the suspension, the state received a report he was cutting his arms on Snapchat, a mobile application.[21] The Florida Department of Children and Families (DCF) investigated whether Cruz intended to harm himself, when he made alarming social media posts after an argument with his mother. Cruz was upset over a breakup with a girlfriend, his mother told investigators.  According to a report by DCF, a mental health counselor from Henderson Behavioral Health, visited Cruz at home in the past and had him sign a “safety contract.”[22] Safety contracts are usually employed when someone is suicidal or self-harming.  There are studies to show that they are ineffective. (In a 2001 study, of people who attempted suicide in a psychiatric hospital, 65% had signed a safety contract.[23]) The Sun Sentinel reported that according to the 2016 state report, crisis workers from Henderson Behavioral Health, a major mental health center, were called to the high school and determined that Cruz was “not at risk to harm himself or others.” [24]

September 28, 2016: The Broward County Sheriff’s Office in Florida responded to a 911 call.  A police report reported how Cruz had been harming himself and had talked about buying a gun. “He has been cutting his arms, his mother said, to get attention, as he learned it from an ex-girlfriend,” the report said. “He has mentioned in the past that he would like to purchase a firearm.”[25] Incident reports, as recent as September 2016, described Cruz as being “emotionally handicapped,” and being on “behavioral medication.”[26]

Jared Bienenfeld, a therapist with Henderson Behavioral Health, “deemed Nikolas to be no threat to anyone or himself at this present time,” according to the police report.[27] Bienenfeld’s current license as a family and marriage counselor intern, Number IMT179, originated in September 2012 and expires in March 2022. [28]

November 2016: The Florida DCF closed its investigation into Cruz’s worrisome behavior. A DCF report noted that a mental health center had been contacted in the past to detain Cruz under Florida’s Baker Act.  Henderson found him stable enough not to be hospitalized, the DCF investigator wrote.[29] (The Baker Act is notoriously abused and doesn’t guarantee better “care” for children and adolescents or the prevention of violent behavior, especially if the person is treated with and/or discharged on any psychotropic drug that has the potential to cause aggressive behavior or homicidal ideation.)

January 2017: Cruz assaulted someone and received a one-day internal suspension.[30] Broward County Public Schools disciplinary records obtained by The New York Times showed Cruz had a long history of fights with teachers. He was referred for a “threat assessment” in January 2017. Cruz also worried officials at Marjory Stoneman Douglas High who on at least one occasion alerted a mobile crisis unit to get him emergency counseling, according to a state report.[31]

He was expelled from Marjory Stoneman Douglas High School where the JROTC class was held over disciplinary issues.[33]

Fall 2017: Cruz was reported to have attended the local mental health clinic (Henderson Behavioral Health) for about a year or more before he quit in the fall of 2017.[34]  (See January 15, 2013 entry, where he is reported to have been a client for years.)

February 14, 2018: Cruz had never been arrested until this Valentine’s Day, when he went to Marjory Stoneman Douglas High School and shot dead his former classmates and teachers. [37] 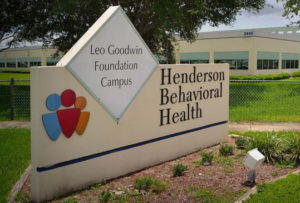 Henderson Behavioral Health says it is one of the oldest, largest and most successful providers of behavioral healthcare in Florida.  Its director and Chief Executive Officer is Steven Ronik, a licensed clinical social worker.[38] Prior to his current role, Ronik held several leadership positions at the Zucker/Hillside Division of the LIJ/Northshore University Healthcare System in New York City. Zucker/Hillside is a National Institute of Mental Health (NIMH) research center for schizophrenia and one of the nation’s leading research behavioral healthcare systems. [39]

Prepared by Citizens Commission on Human Rights International, a mental health watchdog group of nearly 50 years. CCHR has been investigating and collecting information on psychiatric drug links to school shooters and other acts of senseless violence since 1989, when Joseph Wesbecker shot dead eight people and injured 12 others at his workplace in Kentucky while taking Prozac. His medical records said the prescribing psychiatrist observed three days prior to the killing, an “increased level of agitation and anger.”[46] CCHR provided evidence to the Colorado State Board of Education and a State Hearing into psychotropic drugs and violence following the Columbine High School shooting in 1999. Ringleader, Eric Harris, was taking the antidepressant, Luvox. CCHR has been responsible for more than 180 laws worldwide that now protect the rights patients and families in the mental health system.

[7] “Anatomy of an Epidemic: Psychiatric Drugs and the Astonishing Rise of Mental Illness in America,” Ethical Human Psychology and Psychiatry, Vol. 7, No. I, Spring 2005, http://pt.cchr.org/sites/default/files/Anatomy_of_an_Epidemic_Psychiatric_Drugs_Rise_of_Mental_Illness.pdf.